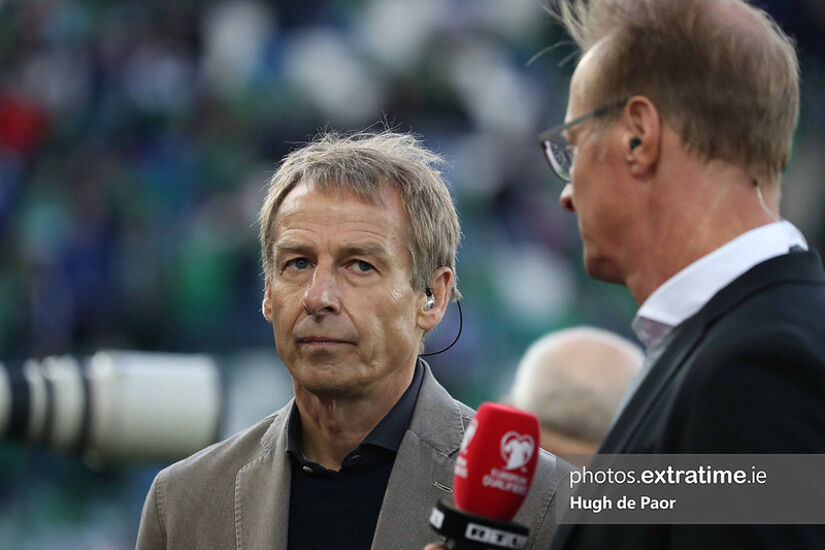 Jürgen Klinsmann: ‘It could be a World Cup of surprises’

With it being a winter World Cup and most players coming straight from the middle of their club season, Jürgen Klinsmann believes it could throw up some surprises in the tournament.

“It could be a world cup of surprises,” said Klinsmann who won the World Cup with Germany in 1990 and coached his native team to third on home soil in 2006. “If some of the underdogs, maybe an African or Asian team, if they are courageous, I think you can go actually far in this tournament. It isn’t one to sit back and defend.

“Most players are straight out of their regular season in Europe and I believe we will see a high quality tournament as the players are fresh and hungry.”

Klinsmann was speaking at a press briefing in Doha with Arséne Wenger. The former Arsenal manager is FIFA’s Chief of Global Football Development and is working with Klinsmann as part of the football federation’s Technical Study Group (TSG).

The TSG will provide analysis of all World Cup matches with the aim of increasing and developing understanding of the game across the world. Led by Wenger, the TSG consists of Jürgen Klinsmann (Germany), Alberto Zaccheroni (Italy), Cha Du-Ri (Korea Republic), Sunday Oliseh (Nigeria), Faryd Mondragon (Colombia) and Pascal Zuberbühler (Switzerland).

They are being supported by a 78 person team of football analysts, data engineers, data scientists and performance analysts based in both Qatar and Wales.

Developed by the FIFA High Performance team and Arsène Wenger, the Enhanced Football Intelligence service is aiming to enrich the coverage and analysis of every game at the tournament – with results available four hours after the conclusion of games here: fifatrainingcentre.com

In addition the TSG will study trends and benchmarks and their impact on coach education and talent development.

“We want to describe, analyse and interpret what is happening on the pitch to inspire technical experts and football fans in general,” said Wenger.

“We will not only be collecting more data than before (15,000 data points per game), but we will also be aiming to find the right balance between technical expertise and data.”

Wenger outlined some of emerging trends in the game after the event on the eve of the tournament kick-off.

“Teams play all over world high up with a counter press – pushing up the defensive line,” said Wenger on Saturday. “Defensive lines will be much higher on average than the last World Cup. Pressing has become universal. The quality of the first pass on transition to break the press is very important.

“At the last World Cup, teams like France with a player like Mbappe were happy to counter attack. In transition they were the most dangerous team whereas Spain traditionally want the ball as that is their culture.”

Meanwhile Klinsmann acknowledged that the condensed tournament throws up other challengers.

"Teams might be at an advantage with a big block of players from the one club. With Germany there is a strong Bayern Munich block and it could put their stamp on the team.”

Klinsmann’s hope is that teams use a number 9 up top and, maybe unsurprisingly as a former Spurs striker, he picked out one forward in particular who he hoped will find the back of the net.

“It will be Interesting to see will teams play out from back or to avoid trouble they may go long. Also, how will teams utilise the number 9. The ‘false 9’ bothers me and so I’m hoping number 9s can get goals – like Harry Kane.”