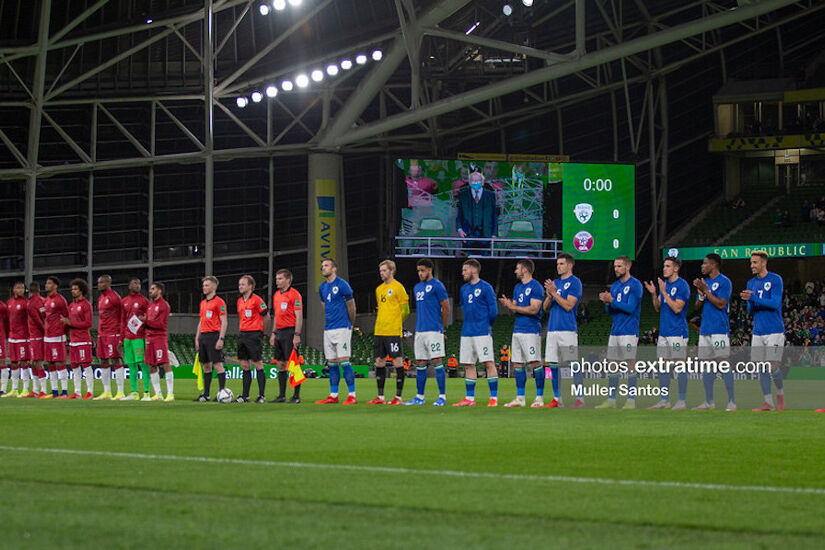 The Republic of Ireland team lining up ahead of their friendly game against Qatar in 2021 Credit: Muller Santos (ETPhotos)

As the eyes of the world continue to drift towards Qatar ahead of World Cup kick-off this weekend, the FAI issued a statement on Tuesday acknowledging the ‘important and ongoing debate around human rights issues and the protection of migrant workers in the host country.’

FAI CEO Jonathan Hill said: “The FAI supports the call for the protection and support of migrant workers and their families and for basic human rights for women and the LGBTQ+ community to be respected at all times.

“We trust that the significant media attention on the tournament in the coming days and weeks will do much to shine a light on these important issues and that football can reflect on the role it can play in effecting societal change.”

The statement noted that the FAI have been in correspondence with Amnesty International Ireland confirming the association’s ‘strong belief that football can be a positive force to highlight inequalities in society and should be a catalyst for real, positive and sustainable societal change.’

Ireland fans will of course have to wait till next summer to see an Irish team compete in a football World Cup, when Vera Pauw’s team take part in the 2023 Women’s World Cup in Australia.

While Stephen Kenny’s team missed out on Qatar, the Ireland boss will travel to Doha for five days where he will take in a couple of games involving both the World Cup holders France and the Netherlands.

Both teams are in Ireland’s group in European Championship qualification.

Ireland played Qatar in a friendly in the Aviva Stadium in October of last year.