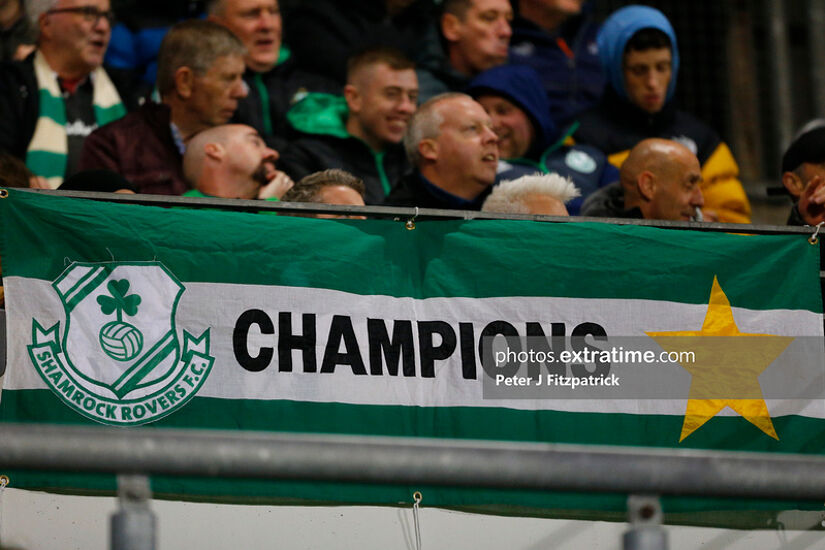 Shamrock Rovers clinched a club record league points total on Sunday evening, as they breezed past UCD with a 2-0 win.

Goals in either half from Aaron Greene and Simon Power sealed the deal for the Hoops, as Stephen Bradley’s side won in their 54th, and final game of the season.

Greene opened the scoring in the 6th minute of the game, as he netted following a well-timed cushioned header from Justin Ferizaj.

UCD initially failed to deal with Rovers ball into the box, with Ferizaj rising highest to feed the ball into the path of the experienced forward.

The visitors continued to impress early doors, and may have doubled their lead through the head of Roberto Lopes – but the Cape Verdean international headed over the bar.

Ronan Finn then went close himself, but he too was unable to double the league champions lead in Belfield.

In a low-key affair that Rovers dominated, Rory Gaffney then went closest to giving Rovers a 2-0 lead at the break – but he was denied by the hosts netminder Kian Moore.

The second-half saw UCD change the tide of the game however, with their quartet of half-time subs having the desired effect.

Youngster Harry O’Connor looked a threat, but it was Tobi Jinad who had their best opportunities of the game.

Jinad stung the fingertips of Leon Pohls after a surging run forward from full-back Aaron Corish – before then playing in Jack Keaney who ballooned his effort over the bar.

But UCD’s two consecutive efforts on goal came just after Greene saw his effort come off the butt of the post – with Finn unable to scramble home the rebound.

Gaffney then did his best to fire past Moore with an effort of his own shortly after the hour mark, but was denied by the talented shot-stopper.

Jinad then forced a smart save from Pohls – before Power ended the game as a contest in the 83rd minute.

Power’s deflected effort on goal creeped its way into the back of the net, despite the best efforts of Moore to keep it out.

The win saw the Hoops record a points tally of 79, eclipsing their previous record of 78 in 2021.

But for UCD, they will be pleased with elements of their battling performance heading into next week against Waterford in the promotion/relegation play-off final.