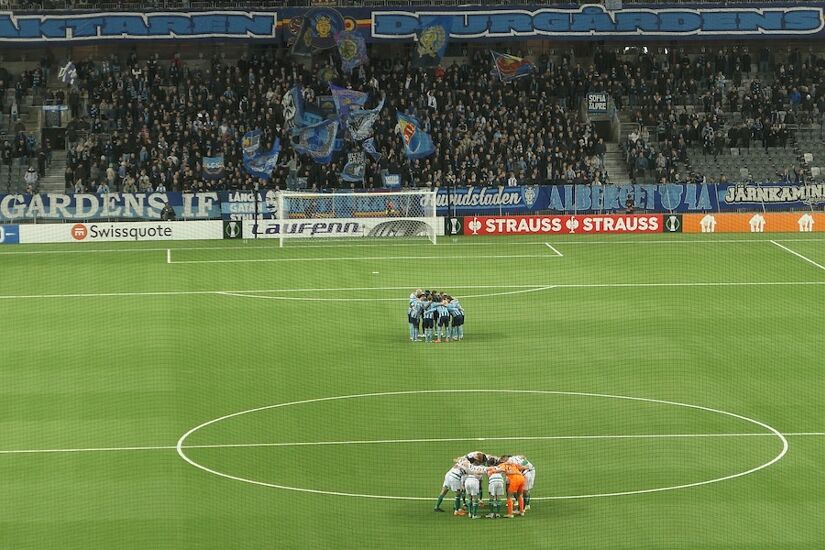 Djurgarden and Shamrock Rovers teams in huddles ahead of kick-off in their Europa Conference League clash in Sweden Credit: Macdara Ferris

Postcard from Stockholm - The end of Shamrock Rovers' 2022 European adventure

After 14 matches across 17 weeks with 35,000km of travel (with virtually all of the air miles starting from Shannon Airport), Shamrock Rovers’ European adventure concluded in Stockholm this week.

With Thursday night’s 1-0 defeat to Djurgarden in their final group game there was to be no additional coefficient points to be claimed or European prize money for the Hoops banked on top of the €4m earned to date but Rovers can reflect positively on their performance in both their the game in Sweden and also the euro campaign overall.

No League of Ireland team has played as many matches in Europe as the 14 that the domestic champions have lined out in this season (in what was also a compressed euro campaign due to the upcoming Qatar World Cup).

A return of five wins and three draws, including two points picked up in the group stage (drawing at home to both the winners and runners up in Group F) and the €3.94m prize money and all done during a season where they secured the league title - their third in a row – all makes for a superb season for Shamrock Rovers.

It is 20 years since the Hoops last played Djurgarden. In a UEFA Cup tie in 2002 they lost the first leg 3-1 in Tolka Park (where Rovers were playing out of at the time with the Tallaght Stadium project stalled) and 2-0 in the Rasunda arena in Solna.

Fast forward two decades and champions Shamrock Rovers travelled to the Tele2 Arena confident they could back up their scoreless draw in Tallaght against the Swedish side (who had already won the group) and get a result against the runners up in this year’s Allsvenskan.

The match venue was in Sodermalm, the Hammarby area of the city, and is home to both Djurgarden and rivals Hammarby. Founded on Djurgarden Island in 1891, the club played out of the 1912 Olympic Stadium from 1936 until 2013 when they moved to the multi-purpose Tele2 Arena.

1912 Stockholm Olympic Stadium - home to @DIF_Fotboll before their move to the Tele2 Arena pic.twitter.com/7fF2Rncudu

As for all Rovers European away games, supporters purchased ticket vouchers online ahead of the game with the ticketcollection point (with ID required) announced on the eve of the match.

In Stockholm the meeting point was the Green Hunter pub in Soderhalm and from there the 450 or so Rovers supporters travelled with local police and plain clothes Gardaí three stops on the metro and around to the away section of the ground (which is also the home end for Hammarby games).

With the lower tier terrace area unavailable for UEFA games, Rovers supporters had the middle section of the (cushioned) seated upper tier behind the goal. The retractable stadium roof remained open for the game but it didn’t detract from the atmosphere which was generated by the close to 17,000 supporters in the stadium.

The Blaranderna fans (‘The Blue stripes’) were in fine voice and this went down well with Hoops supporters as both the group games in Gent and Molde had very small home attendances leading to a very flat occasion (not helped by Rovers’ poor performances in both games).

With the league title secured the previous week, Stephen Bradley was able to name a much stronger side compared with the previous group games - albeit with Leon Pohls starting in goal. With Alan Mannus rested, there was much discussion whether that made it less or more likely an indication that Mannus may return to Rovers for one more year next season.

The Hoops avoided conceding an early goal as had become habit in games against higher opposition in Europe this season. Trailing 1-0 at the break after Magnus Eriksson's 19th minute goal, they stayed right in the game up until when the final whistle was blown by Scottish referee Nick Walsh.

Looking at Thursday’s match stats, it reinforced the view that this was a Rovers European performance that probably matched their best of the campaign - the 2-1 away win against Shkupi in early August that secured group stage football for the Hoops this autumn.

Stephen Bradley speaking to shamrockrovers.ie noted "I think you could see the players were free and focused and the performance showed that. I thought we were very good on the night and I felt the performance merited getting something from the game.”

In Sweden, Rovers had 47% ball possession and an 85% pass completion rate. Comparisons between Djurgarden and Rovers were fairly favourable for the Hoops - 32 attacks to Rovers’ 28 and goal attempts 13 v 8 (on target 3 v 2) with the Hoops winning the corner count 3 to 6.

The 1-0 loss left Rovers bottom of the group but unlike in the Europa League in 2011 this time around Rovers didn’t lose all six matches and have the worst record in competition. They were one of five teams from the eight groups who earned two points (with just one of them having a better goal difference than Rovers’ minus nine).

Last of the Thursday Night Football (for a while) pic.twitter.com/2A80yFjEYU

Reflecting on the overall euro campaign, Rovers can look back with immense pride on their remarkable home record in Tallaght. From seven games, they won five and drew two. Their only defeat was against Molde and that remains Rovers’ only loss at home in all competitions for over a year (since Flora Tallinn in the Europa Conference League play-off in August 2021).

Critical for further progress for Rovers is the requirement to improve their results away from home. Their only win outside of Dublin 24 in Europe this year was in North Macedonia against Shkupi (only the club’s ninth ever away victory from 51 matches on the road since they debuted in the European Cup in 1957).

This season’s Rovers away record reads P7 W1 D1 L5 F2 A14 which is in stark contrast to results at home.

Coefficient points on the board and money in the bank

The other important stats for the club from this year’s euro campaign are the coefficient points claimed and the money earned. They are assured of €3,936,500 (including €332,000 from their two group stage draws) and will also receive money from the TV market pool at the end of the competition.

The 3.375 coefficient points secured for League of Ireland this year (with Rovers earning 1.875 of that total) move Ireland to a five year total of 10.375 which leaves our league 36th in the UEFA rankings.

The Hoops are in an excellent position to be seeded again next season. The club made the most of being drawn against a fairly rubbish Hibernians side in the first qualifying round of the Champions League back in early July.

They had a one in five chance of getting Lech Poznan when the draw groupings were confirmed on the eve of the event in UEFA HQ in Nyon. However by being drawn to play the Maltese championsand going on to win 3-0 on aggregate it provided a back door route for Rovers.

Next season with the benefit of another favourable draw and the huge experience gained this year across the 14 European matches, Shamrock Rovers can look forward to more European adventures with the aim to qualify for the group stages again – with sights set maybe on the Europa League.

Stephen Bradley has said he wants to see his team go better in the points tally than the four points earned by the Dundalk team in the 2016 Europa League.

The next European challenge awaits Shamrock Rovers in 2023.