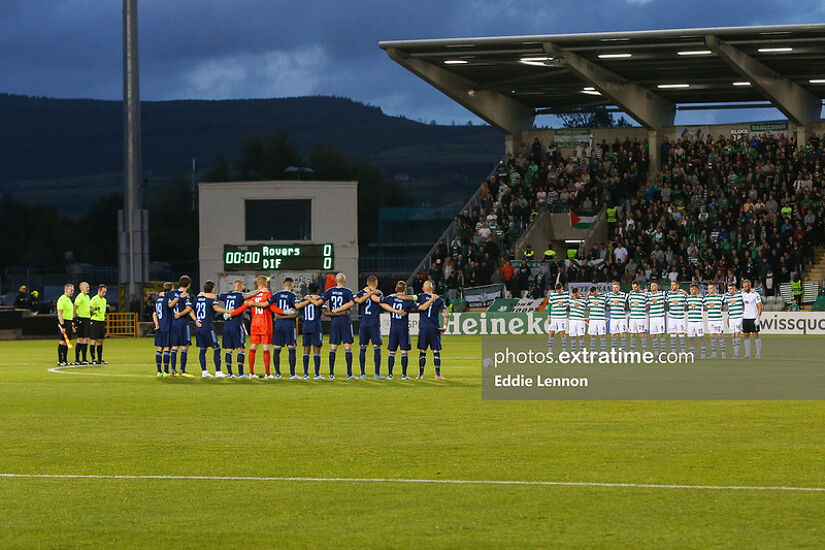 Djurgarden and Shamrock Rovers ahead of kick off in the game in Tallaght in September Credit: Eddie Lennon (ETPhotos)

Shamrock Rovers play their final group game of the Europa Conference League on Thursday when they face Swedish side Djurgarden in Stockholm (kick-off 5.45pm Irish time).

So who are Djurgarden?

They are the 12 time Swedish champions with their last league title coming in 2019.

The Blaranderna (The Blue stripes) were vying for the Allsvenskan title but dropped off in the last few weeks and have just claimed runners up spot behind champions Hacken ahead of this weekend’s final game of the league season.

They won 1-0 away to Norrkoping on Monday and conclude their league campaign at home to Mjaellby on Sunday.

They finished third in the league last season that gave them entry into Europe this season. They then qualified for the Europa Conference League group stage by progressing through three qualifying rounds. They recorded victories over Croatian side Rijeka (4-1), Sepsi Sfantu Gheorghe (6-2) and APOEL (5-3).

How has the group stage gone for Djurgarden?

The Swedes have already won the group with one game to spare. They drew the opening match with a scoreless draw in Tallaght and the Hoops are the only team to take points off them in the group stages.

Gent were dispatched 4-2 at home and 1-0 away and they won 3-2 both home and away to Molde including last week’s victory in Norway when they came back from 2-0 down to claim all three points to win the group.

Only West Ham United and Villarreal have earned more points so far in the Europa Conference League group stage.

What European pedigree do Djurgarden have?

The Swedish side have little experience at this level of European football which shows how well this season has gone. Their only appearance in a UEFA group stage prior to this season was the 1996 Intertoto Cup.

Cork City knocked them out of the UEFA Cup in 2005.

Djurgarden have faced Shamrock Rovers in a previous season – that was 20 years ago in the UEFA Cup. They won 3-1 in Tolka Park with Stephen McGuinness scoring Rovers’ goal and won the home tie 2-0 in Stockholm.

Opened in 2013, the 30,000 capacity Tele2 Arena is home to both Djurgarden and their rivals Hammarby. The stadium has a retractable roof and the pitch is an artificial surface.

What attendance will be there for the game?

The home side have sold 17,000+ while there will be approx 450 Shamrock Rovers fans travelling for the game.

They don’t have one but two head coaches with Kim Bergstrand and Thomas Lagerlof in charge. Bergstrand previously played up front for AIK and Hammarby while Lagerlof was a midfielder who played most of his career with AIK where he won two league titles.

The duo have been in charge since 2018 and masterminded the club’s league winning success in 2019.

What formation do they play?

It has been 4-3-3 all the way for Djurgardens in Europe this season. Only Villareal (14) and Silkeborg (12) have scored more than Djurgardens’ 11 goals in the Europa Conference League group stage this year.

Joel Asoro has scored seven goals in Europe this season including two in the group stages. He spent a couple of seasons as a teenager with Sunderland and was at Swansea City before the under-21 international signed for Djurgardens in 2021.

Their captain is Magnus Eriksson who with four assists sits second in the group stage assist charts.

Vice-captain is Hjalmar Ekdal who has played all bar one of their 11 European games this season. He earned a couple of caps with Sweden this season during the UEFA Nations League campaign.

Zambian international Emmanuel Banda has scored three goals in Europe this year including two in the group stages.

Do they have any suspensions for Thursday’s game?

While Rovers will be missing Justin Ferizaj due to his red card against Gent and Sean Kavanagh having picked up three yellow cards, Djurgarden have no suspensions. Rovers have got 16 bookings with the top offenders in the competition on 17.

While they have no suspensions Joel Asoro, Victor Edvardsen and Rasmus Schuller are just one booking away from missing their next European match.

That game will be in the new year away in the first leg of the last 16 tie where they will be seeded as Djurgarden have already won Group F. They will face the winner of one of the play-off ties which will be the winner of a tie between a runner up in a Conference League group and a third placed team from the Champions League group stages.

Where can I see the match?

The game will be shown live in Ireland on Virgin Media and is also on BT Sport.

Nicolas Walsh leads a team of Scottish officials for this game. He officiated the Ireland's 2-2 draw with Belgium in the Aviva last year.

Which airport are Shamrock Rovers flying out to on their trip to face Djurgarden?

Still no room for Rovers at Dublin Airport as the Hoops are set to fly out to Sweden from Shannon Airport at lunchtime on Wednesday.