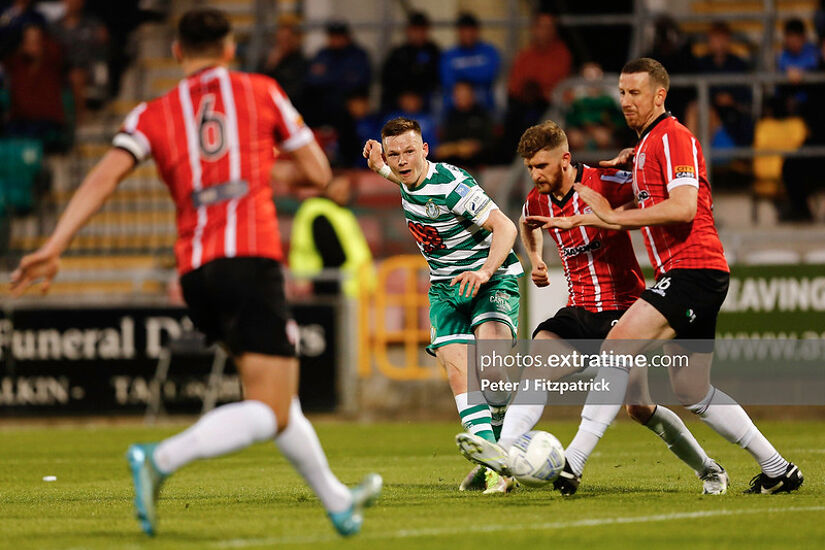 Andy Lyons in action in Rovers' win over City in May will play his final home game in Tallaght today ahead of his move to Blackpool Credit: Peter Fitzpatrick (ETPhotos)

Hoops skipper Ronan Finn will lift the League of Ireland trophy for the third season in a row when he receives it in Tallaght Stadium on Sunday night after Rovers’ final home fixture of the season against Derry City (kick-off 7pm).

The title race concluded last Monday with the Candystripes drawing their second match in a row handing the championship to the Hoops without Rovers having to kick a ball.

It has been a good week for Stephen Bradley’s side who, buoyed with winning the club’s 20th League of Ireland title, grabbed their second point of their Europa Conference League campaign on Thursday in a gritty 1-1 draw against Gent in Tallaght.

That point came at a cost for Rovers though with both Chris McCann and Dylan Watts limping off in the first half adding the an incredibly lengthy injury list. The Hoops are likely to be without Aaron Greene, Gary O’Neill, Graham Burke, Jack Byrne and captain Ronan Finn for this game.

In particular it leaves Bradley with a real headache in midfield. With Justin Ferizaj and Sean Kavanagh suspended for Thursday’s away game against Djurgarden they will likely to start the game – along with Sean Hoare who stepped into the midfield mid-week. Gideon Tettah may be called upon from Rovers’ youth setup to come in for this game.

Last season once the title was won, Bradley brought a number of underage players in to the match day squad and handed Leon Pohls his league debut in goal.

The Hoops are unbeaten in Tallaght in the league this season – and going back to May last year – having dropped just four points from the 51 they have played for in Dublin 24 and they won’t want to lose to a team who are most likely to be the side who are best placed to stop Rovers next season winning the club’s second four-in-a-row.

Having been unable to take the title race into today’s game in Tallaght, Derry City at a minimum will be looking to take a point which would secure runners up spot in the table for their best league finish in 16 years.

Spoiling the party with a Rovers win – and ending a 16 month league unbeaten run for the Hoops – and setting a marker for next season might also be on their mind, as is the upcoming FAI Cup.

"No doubt there'll be a party atmosphere at Tallaght on Sunday so it's up to us to try and put that out of our minds and go about our business,” said City boss Ruaidhri Higgins who confirmed his team will form a guard of honour for the title winners ahead of kick-off.

“They’re champions again and deservedly so. They've been the most consistent team in the league this season and we will afford them the respect that deserves. It's obviously not something we'll take any pleasure from but we want to go down there and do the right thing, but also to then put in a big performance and try to win the game."

The teams have faced each other four times so far this season. The Candystripes won 2-1 in their first home game of the season. The Hoops claimed a 1-0 victory in Tallaght thanks to a Danny Mandroiu goal in May. There was a scoreless draw in August in the Brandywell in a game that City dominated – with Alan Mannus saving a Will Patching penalty.

En-route to next month’s FAI Cup final, City defeated Rovers 3-1 at home after extra-time at the quarter-final stage.

"There's been very little between us on the head-to-heads this season-one win each plus a draw in the league as well as our win in the cup. With the league gone, the cup final is now our priority for this season.

“On the team front we're all good, apart from a few niggles that usually happen at this time of the year.

'We'll manage it so that players who might need some game time will get it, but also that everyone is fresh for the final as well.”

Rovers have played 51 competitive games this year and will play 54 matches across a 268 day campaign this season in total. This compares with 2011 when they made the Europa League group stage and they played 60 matches across 296 days.

Graham Burke is top scorer in the league for Rovers with 11 goals (including five penalties). Rory Gaffney has scored more in all competitions with 14 goals including ten in the league. Jamie McGonigle leads the list for City with ten goals.

Rovers haven’t lost a league game in Tallaght since a 1-0 defeat to Sligo Rovers on 24 May 2021 - that is their only league loss at home in over three years dating back to the end of May 2019. The Hoops current unbeaten run of 28 league games, the club’s best since a streak of 31 league home matches without a loss across 1963 to 1966.

In Pictures: @shelsfc win the WNL with 4-0 win over Wexford Youths in title decider