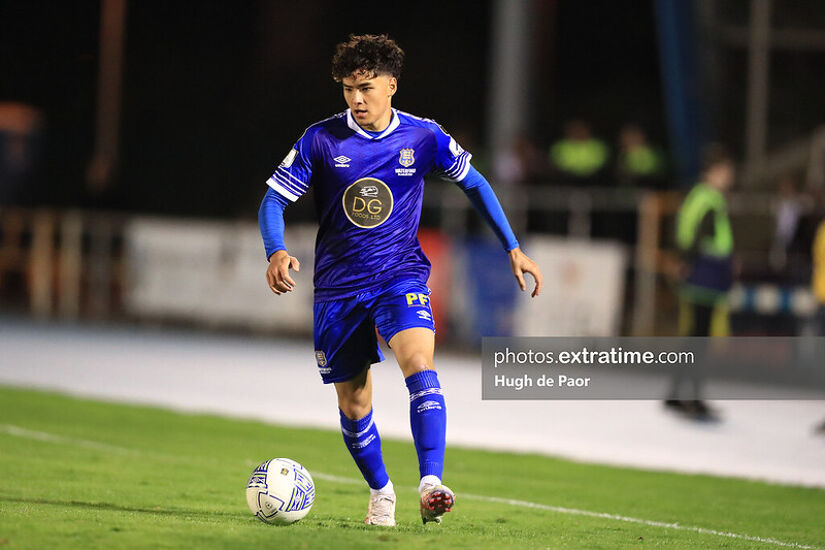 Waterford FC climb to second place in the First Division table after a hard-fought 2-1 win against Longford Town in Bishopsgate on Monday night.

An goal-of-the-season contender from Matthew O’Brien gave the home side the lead after just three minutes when the midfielder produced a stunning volley to stagger the Waterford defence. O’Brien, playing in his 19th appearance for the club, was unfazed by Roland Idowu who attempted to dispossess the number 17 before he struck the ball into the right-hand side of the net on the volley.

Longford, who made seven changes to the side who drew 2-2 with Athlone Town on Friday night, looked the livelier side in the opening stages of the game and came close to doubling their lead when Adam Verdon swept in a quality corner kick which Paul Martin in goal struggled to get a hand to.

The Blues took back possession and just ten minutes after the opening goal, Phoenix Patterson whipped the ball to the back of the net from a direct free kick after Longford’s scorer O’Brien brought down Yassine En-Neyah on the edge of the box. A beautifully curled effort from Patterson who is renowned for scoring from this position.

The goal gave the visitors a clear burst of energy and it took just two minutes for them to take the lead after Junior Quitirna slid the ball out to Wassim Aouachria, who slotted it calmly into the bottom right of the net. Quitirna boasted some exceptional footwork throughout the game and gifted Aouachria the ball to make it 2-1 after 16 minutes.

The remainder of the first half had a free-flowing style with respectable efforts from both sides. Cristian Magerusan had a close shot when he was allowed space to get around the defence and have an attempt on goal, but the effort was too fragile for Waterford’s Martin.

The Romanian playmaker showcased another close attempt just before half-time when Joe Power crossed in a brilliant ball, but it was too high for Magerusan to reach it for a header. Power was a constant threat to the visitors throughout the night and demonstrated his creative style remarkably.

The second-half became a little more aggressive in the early stages with bookings for both sides, most notably Joe Power who brought down Aouachria just outside the box, leaving Patterson with another attempt at a direct free kick.

The youngster skimmed the ball just off the top of the post, leaving Longford with a bit more breathing space to get their attacking pace back. The latter’s substitute Jordan Adeyemo made an instant impact with an acrobatic attempt at a header with 15 minutes to go. The ex-Galway United forward had time and space to bring the ball down but missed the opportunity to do so.

The closing ten minutes brought plenty of opportunity for both sides, Patterson being the busiest on the field by flying down the wing when in possession and bringing his defensive duties to the table when needed.

Longford’s Adeyemo was brought down by Blues substitute Richard Taylor in the dying minutes, but the referee waved away the appeals for a penalty by the home side. Darren Clarke had a decent long-range shot saved supremely by Martin, with another effort by the number seven missing the goal by inches in a second attempt moments later.

The win for Waterford sees them overtake Galway United into the second-place spot after a third league win in a row. Longford stay in fourth with 48 points with a play-off place still in their sights.