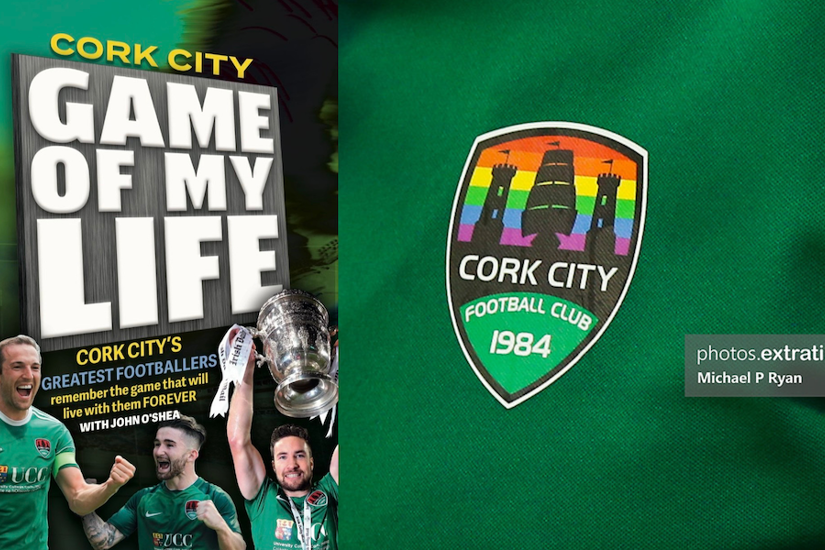 Cork City – Game of My Life

‘Cork City – Game of My Life’ is a new book by John O’Shea published this month by Hero Books.

O’Shea has interviewed 30 of Cork City’s greatest players to document the game that lives with them forever.

The book tells the tale of those most memorable matches told by the players themselves. The list of players includes:

Below is an extract from the book with John O’Flynn discussing the 2005 league winning season and the win over Derry City in Turner’s Cross in the final game of the season that secured the title.

For me leading into the last game of 2005 against Derry, we knew it was going to be the last night of the Shed at Turners Cross. So it was a historical event. It is definitely my favourite game and something that any anniversary of that game that comes up on something like social media, it always gets fans talking and them memories build up again and it comes back to you.

I think maybe three or four weeks before the Derry game, I picked up a groin injury and it was down to the Wednesday before the final game that I got the all clear to be involved, at a capacity where my strength and conditioning coach was saying if you have a chance where you are going to smash the ball, don’t smash it because you will probably pull your groin.

So I am going into the last game thinking I am fit enough to start, but I need to kind of hold back a small bit. It was my right groin, so I was thinking if I can get something on my left foot or my head, I would have been a lot happier one on one with the keeper. Lo and behold, I scored the first goal that night with my head. I remember getting it to the left hand side, just bringing it across to the mid and passing the ball went across to Roy O’Donovan.

I got myself into the box, Roy put a great ball in and I got in between the two Derry centre halves and bang that was it. I think that really steadied our nerves.  We needed to win that game to be crowned champions. Derry just needed to draw that game. We never had any thought but to go out, start on the front foot and try to get into a lead to win that game. Scoring that goal personally for me was fantastic.

All of my family, friends and loved ones they were all there. It was my local club.  They were all in the stadium for the last night of The Shed. That really calmed us down and it onto be a momentous night. But it is definitely for me the game for me that will live long in the memory.

We had a strong base of Cork players and a mixture of lads who weren’t from Cork. We had Pat Dolan in that pre-season, he would have been there the previous season also. There were ingredients there that we knew and then just before the start of the season there was a shakeup. Pat Dolan was told he was going to be sacked, Damien Richardson was coming in. I never forget that day in Rochestown Park. There was a meeting and we never saw it coming.  It was obviously stuff behind the scenes that we didn’t know about.

We were focused on getting pre-season over with and starting the season on a high. That was a big little shake in the camp heading into that season. But Rico came in and done really well.  He was one of them characters that came in, saw the talent that we had and said lads, just go out and express yourselves, go out and play football. We done that.

Rico kind of had that relaxed manner about him. He could lose the rag  as well and you knew if he was about to burst. But the majority of the time he had that relaxed manner about him.  He definitely knew the squad of players that he had and he gave us that freedom to go out and express ourselves. There was never a constraint that you had to play this one role and you couldn’t go out past the realms of that specific job.

He just gave lads freedom. Probably prior to that, I knew him as a guy on TV who would be saying them big words and sprouting that big chat. But when he came in, his character all came into one. He was well able to man manage and manage that team of players.

Looking at it, if I was coming in as a manager with that wealth of talent that you are inheriting, it would probably be the same bill, there is no point in going in trying to re-invent the wheel, getting these last to do things they weren’t used to doing. We all had our habits and things we had built up over the years.

There was some fantastic characters and there was probably leaders all over the pitch. The Cork base of players made it special as well. We all knew what we were up against expectations of fans, expectations of parents, relatives and all that. I think if you are outside or unless you have lived in the city or played for the club more than two/three years, you don’t really get it. Somebody coming in doesn’t know how much it actually means. But we all knew what it meant and that was probably the highlight of that season.

Kevin Doyle would have started the start of the 2005 season and he would have gone to England probably halfway through. It was just before the European games started so it would have been quite early on. We were down Kevin for more than half that season. He was a big loss, but you had the likes of Denis Behan and Neale Fenn, Roy O’Donovan who could play up front. So we had a massive array of attacking talent. But definitely the foundations for us were Mick Devine and the back four.

I think that year more than any other, we didn’t score a massive amount of goals but the defence was rock solid. You had Mick Devine there. You had Alan Bennett and Dan Murray who sparked up that partnership. You had Hoggy (Neal Horgan) on the right and Danny Murphy, the Cockney Rebel on the left.

Every week the back four and keeper, who knew their jobs and how they liked to play. The unit, they knew it like the back of their hands. So that was our base and  then won the league on. There was a lot of 1-0 wins. We probably won games 2-0, 3-1 or 3-2, but there was a lot where it was 1-0. It was 1-0 because we scored a goal and then the lads done their jobs at the back and kept a clean sheet.

If we had a five a side, there could be Dan or Benno on either side. Then you are talking Hoggy and Danny, Joe Gamble, Neale Fenn, Roy O’Donovan, Georgie, myself. We had so much talent. We used to actually joke that training was actually harder than matches and we used to kick lumps out of each other. There was never animosity about if Denis Behan was starting ahead of me, we all had that confidence about us and team spirit. There was some high quality games in training of high quality tempo, skill level and all of that.

The games used to be a release, go out and enjoy yourself and play. But as well as the leaders that we had, we had lads who had really, really high expectations and high standards. So if your touch was off or if you weren’t at it, you were just left behind really. There was enough fellas to tell you that you are not at it today.

I think it was a really good balance of fellas who wanted to win so badly, who had the skill level and intensity. But also there was never a lack of anything in a training session. It is a funny thing to think back about the plethora of talent we had at this stage.

Before we went out onto the pitch, we obviously knew that the atmosphere was going to be electric. We didn’t realize there was going to be that many people there as we turned up.  As we went out to warm up, normally for the warm up there might be only a couple of hundred people coming in early reading the programme and watching the warm up. But there was thousands there that night, so it felt like the game was about to kick off when we were walking out to actually go and warm up.

In the dressing room Derek Coughlan stood up and said his bit in his deep Cork voice and his big frame. Everyone just stood up. What he said was what it meant to him and what it meant to the Cork people and the fans outside, if we go out to win this and are crowned champions.

It was a moment where the hairs are standing up on the back of your neck and we were going out ready to go to war basically after the rousing speech from Derek. I remember when we won it, I don’t know where my jersey went as I threw it at somewhere  But you are looking around for them faces, your family to get the hug.

There was a bit of needle there between the teams. Even though the fans got on superbly well and even after Derry fans had lost that night, there was no animosity or ill feeling there. But Paddy McCourt was named on the bench. Right before we would have got the team sheet and that was a massive plus for us we felt anyway. Whether he wasn’t fit or if Stephen Kenny felt someone else could do the job better, we felt as a team that was a big turning point.

Paddy would have come on and had a guilt edged chance, a header right at the far post and Mick Devine made an unbelievable save that was a pivotal moment in that game that probably doesn’t get highlighted as much as me scoring that goal or Kearney scoring the second goal.

I remember the lads bought the cup into The Shed at the end of the game. I totally missed that, I was off with friends and family. Then I went into the changing room but the lads had come back to say they were all in The Shed celebrating with the fans. I remember we probably didn’t put our hands in our pockets for three or four weeks after that. Anywhere in Cork we went there was people pulling us into shops, saying pick whatever ye want. I turned on the Christmas lights in Cork city centre. That is how much of a pedestal we were up on.

It is only when you look back now at people they probably would have asked before or after that, it just shows how big of an impact we had that year on the whole city. It definitely encapsulates every kind of emotion that you ever would face as a footballer. That night it just all clicked and they were great emotions.. Twenty years I was a footballer and the majority of that time was with Cork City in one spell and then another spell.

It is always Cork City for me. The club is on one of those waves or cycles currently at the minute, where we reached a peak, it falls off and there is a rebuilding stage. The peaks and them highs will come back. As a fan I am looking forward to them times coming really soon.