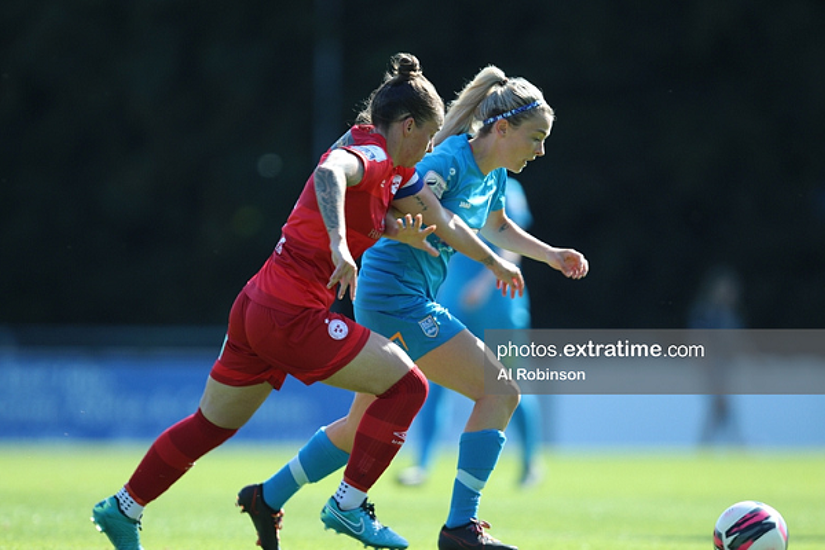 DLR Waves emerged victorious after a cracking five goal thriller in Eamonn Deacy Park as they secured a 3-2 winner over Galway on Saturday.

The home side took the lead through Elle O’Flaherty only for Waves’ Shauna Carroll and Katie Malone to score twice within the space of six minutes to take the lead.

Galway equalised through Jamie Erickson in the second half but Waves took the lead late on through substitute Avril Brierly to secure the three points.

The Tribeswomen had two changes from their previous game with Chloe Singleton and Eve Dossen starting in place of Lynsey McKee and Aoibheann Costelloe.

Waves made two changes from their loss to Bohemians last week, Sophie Watters and Shauna Carroll came into the starting eleven in place of Fiona Donnelly and Kate Mooney.

Galway took the lead in the seventh minute after some excellent play by their captain, Julie Ann Russell. The Ireland international beat Louise Corrigan as she cut into the box from the right before squaring the ball to Elle O’Flaherty who was able to tap the ball into the goal to give the home side the lead.

Waves responded after just four minutes when Shauna Carroll turned quickly when she received the ball from a throw in in the final third, the midfielder took the ball away from Jamie Erickson before smashing the ball passed Abbiegayle Ronayne.

The visitors were in front two minutes later when Carla McManus rattled a shot on goal from the right, she hit the woodwork with the ball coming back just off the line, Katie Malone reacted quickest to run in and boot the ball into the back of the net.

Shauna Brennan went close in the 18th minute when Russell played her in on goal with an excellent through ball, she skipped around Eve Badana at the edge of the box before firing off a shot, but a Waves defender managed to get back and cover to deny the Tribeswomen.

Katie Malone nearly set Waves up to extend their lead in the 28th minute when she threaded a ball through to Carla McManus, the forward sprinted on goal before striking the ball but the shot was straight at the goalkeeper.

Galway were in again on goal just after the half hour mark when a long ball from Eve Dossen fell into the path of Chloe Singleton, she had a great chance at drawing the side level, but Badana stood strong to make a good save at close range.

The Tribeswomen drew level in the 53rd minute after a lovely, floated corner kick by Kate Thompson found Erickson at the back post, she managed to head the ball into the roof of the net to take it away from the Waves defenders and bring the home side back on level term.

Chloe Singleton went close in the 68th minute when Galway had a great breakaway after a Waves corner kick, Russell took the ball forward before playing her teammate. Singleton took aim from outside the box, but her effort whizzed just wide of the post.

Substitute Kerri Letmon went very close for the visitors in the 79th minute after some defensive hesitancy on the edge of the Galway box, her effort flew inches wide of the goal.

Waves managed to find the winner in outrageous fashion a little over five minutes from time with substitute Avril Brierly getting on the end of a long searching ball from deep in their own half.

She took the ball all the way into the box and was one on one with the goalkeeper before flicking the ball around Ronayne and chipping the ball into the opposite side of the net.