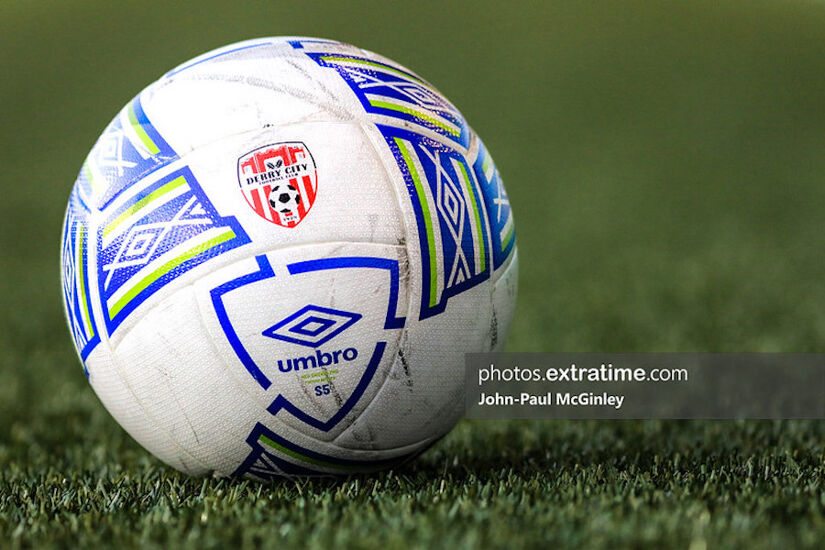 Derry City move to within two points of the top of the table Credit: John-Paul McGinley (ETPhotos)

Derry City made it five league wins in a row as their 1-0 victory over St. Patrick’s Athletic moved them to within two points of the top of the table.

Second half substitute Cian Kavanagh proved the match winner on the night for the Candystripes as they stopped a run of six league wins for the Saints. The victory moved City within touching distance of league leaders Shamrock Rovers (who play their game in hand over the Derry men in Sligo on Saturday night).

Ruaidhrí Higgins made just the one change to his Derry City team that had defeated Shamrock Rovers in the FAI Cup quarter-final in their most recent game. Ciaran Coll came in for Shane McEleney and it was the visitors who had the best of the opening half.

They created a number of chances but couldn’t find the back of the net as the Saints defended resolutely reducing the visitors to shooting from distance.

The home side really only had the one clear cut chance in the opening half but it was probably the best for either team in the first 45 minutes. That opportunity was Sam Curtis’ close range header on 16 minutes that was pushed out by Brian Maher. Harry Brockbank looked to force it home but referee Derek Tomney blew for a free out.

The number nines for both teams saw little of the ball in the first half. However, unlike Eoin Doyle for the Saints, Jamie McGonigle had Michael Duffy, Patrick McEleney and Will Patching getting up to support him.

There was a battle down the Derry left between Duffy and Barry Cotter. Inside three minutes a Duffy centre caused concern for the Saints but the ball flew between Danny Rogers in the Saints goal and the City attack coming towards the goalkeeper.

As per usual a lot of the play for the Candystripes was going through Will Patching. He had a free kick in a central position that he should have done better with, hitting the top of the Saints wall.

Duffy stung the fingers of Rogers soon after before the Saints keeper did exceptionally well to push Patching’s low free kick around the bottom of the post.

That free kick came from a foul by Joe Redmond on Patching when the Saints skipper took him down after he played a delightful one-two with McGonigle, racing towards goal onto a flick.

Just prior to the half time whistle, Patching fizzed a shot just over the bar but the teams went off at the break still deadlocked and with McEleney receiving treatment.

The City captain didn’t return in the second half, replaced by Ryan Graydon, and that certainly took the impetus out of City. They did however go close with an early second half free kick from Duffy that flashed across the goal and it seemed Mark Connolly was going to tap home but he couldn’t get a touch on the ball inside the six yard box as he came in at the back post.

Pat’s began to really pile on the pressure with a series of corner kicks that Forrester put into the mix. A cleverly taken Sam Curtis quick throw allowed Serge Atakayi take on Connolly who took him down wide right. Forrester whipped the free kick in on goal requiring Maher to tip over for a corner kick.

HIggins made a double substitution on 68 minutes as they sought all three points and the switch quickly paid dividends. Duffy’s free kick was flicked on by sub Joe Thomson and Cian Kavanagh drilled a delightful shot by Rogers just two minutes after he’d come onto the pitch.

Pats looked to quickly respond and they came as close as possible to levelling it only for Forrester’s effort to come back out off the butt of the post with Maher beaten.

Tempers flared late on as Forrester and Graydon picked up second yellow cards to get their marching orders from Derek Tomney.

The defeat leaves the Saints five points adrift of third placed Dundalk albeit with a game in hand (which is the much discussed trip to Tolka Park on Monday).

For the Candystripes it is a North West derby next week at home to Finn Harps they continue to put the pressure on the Hoops as the title race heats up.