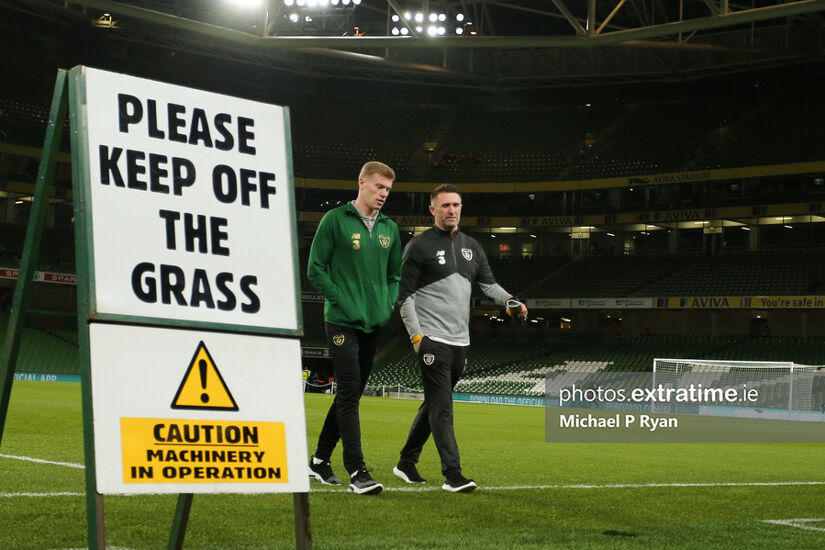 James McClean with then Republic of Ireland assistant coach Robbie Keane ahead of the game against Denmark in November 2019 Credit: Michael P Ryan (ETPhotos)

Robbie Keane: 'If you look at the best players in the world, players from the streets have a toughness about them’

This month at UEFA’s Grassroots Conference in Madrid, Republic of Ireland record goalscorer Robbie Keane spoke about his experience of being a street footballer growing up in Tallaght.

As well as discussing how grassroots football gave him the foundation for his stellar footballing career, he spoke about the experience his son is getting playing as part of the academy at Shamrock Rovers.

“I started in a place called Tallaght in Dublin,” said Keane in a conference Q&A session. “It was a really tough background – you had to look after yourself. But football was always there for anybody. I played football in the streets with my elder brother and our friends.

“As soon as I came home from school, I put my school bag down and played football. I played for a local team called Fettercairn – believe it or not, I started off as a right-back!

“Every club academy, always wants kids from their local area to play for their academy teams, and that’s where you start. You don’t go straight into playing for [the] Barcelona academy.

“You have to start somewhere,” said 42-year-old Keane. “You have to start at a local team in your area like I did, and hopefully climb the ladder. It’s fair to say that if I hadn’t started at grassroots level, I wouldn’t be sitting here.

“I think if you look at the best players in the world, players from the streets, players that understand the game, they have a toughness about them.

“I learned my trade from the little tricks I tried to pull off when playing against the gate or playing against a wall. We had a wall outside my house, with little pebble stones. There were loads of different spaces [in the wall], so the ball would always move to different areas, and I would always have to move quickly because of the stones.

"As a player, I was known for my movement, and I got this movement from small things like this.”

Keane, who was Ireland assistant manager under Mick McCarthy but not part of Stephen Kenny’s staff, has done some coaching at Shamrock Rovers training facility at Roadstone. His son Robert is part of the under-age set up with the Hoops.

“My 13-year-old son is at the academy at Shamrock Rovers, a big team in Ireland who are playing in Europe this season. The academy there is extremely good – they’re definitely paving the way for a better future for the young kids. We’ll see a lot of young, really talented players coming through.”

Keane acknowledged it is difficult with certain expectations placed on his son but is happy that the mixture of good coaching and having time just to enjoy football will help his son progress.

“People expect [my son] to be Robbie Keane … and that’s just not the case. Having said this, at the end of the day, if you’re good enough and you have the mentality, and you have the desire to make it in the game, it’s okay. You can have all the ability in the world, but if you don’t have the heart and the head, it doesn’t matter who you are, you won’t succeed.

“On Mondays, my son and the other academy players play in the hall for an hour and a half – no coaching, no nothing – in the hall, five-a-side, free play. I think it’s important that you have one day where you just let the kids be kids. Let them enjoy themselves.

“You ask any kid what their favourite training session is. Almost every one of them would say [the sessions] when they’re just free, when they just go and play and express themselves. When I was a kid, it was the same thing.

“I was fortunate enough to play for my national team 146 times, score 68 goals, play in England’s Premier League, play around the world in all different places.

"I wouldn’t have had that opportunity without coaches and volunteers taking time out of their busy working schedules to help and educate young players from completely different backgrounds.”