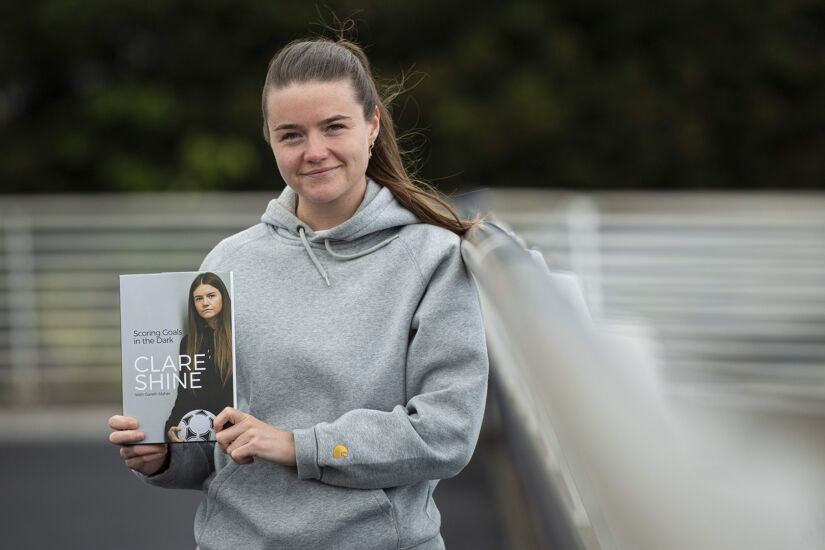 Clare Shine photographed at the launch of her new book 'Scoring Goals in the Dark' Credit: Ross Macdonald

Republic of Ireland international and Glasgow City striker Clare Shine has announced her retirement from football at the age of 27.

The Cork native will officially call time on her career after Sunday’s Scottish Women’s Premier League game against Heart of Midlothian.

She played in the 2-0 win for her team before being substituted in the second half.|


: "A wonderful player. A wonderful goalscorer. An even better person."

Not a dry eye at Petershill. We you Shiney! @ClareShine01 pic.twitter.com/M05Hii5YE0

Shine will remain involved with the club as part of the Glasgow City Foundation as project coordinator.

“As athletes we always have high standards and push ourselves to the limit ever time we step out onto the pitch, I have given football everything I have for the last 22 years, incredible highs but also intense lows,” Shine said, in a statement yesterday.

“Throughout the last few years I have struggles both mentally and physically to reach the demands as a professional footballer and with that I have decided it’s time for me to put myself first and step away from football.

“My happiness and well-being needs to come first and I’m excited to begin the next chapter of my life.”

Having began her career in the Women’s National League with Cork City and Raheny United, Shine signed for Glasgow for the first time in 2015 and across her two stints with the club she scored 70 times in 105 appearances.

The forward also has seven caps for the Republic of Ireland.

Glasgow City Head Coach Eileen Gleeson told the club’s website: “The end of an era. As Clare Shine announces her retirement from football it is with a mixture of sadness and admiration that I pay tribute to a very special person and player.

“Clare has been an outstanding footballer throughout her career, a brilliant ambassador for both club and country. On the pitch Clare is a winner, a leader always demanding standards and a loyal teammate.

“As a person Clare is a role model, an inspiration to many, always showing real strength in the face of adversity. Clare has written the history books at Glasgow City, she is an integral part of many successful moments at the club.

“These will always be remembered. So while it is the end of an era, it is also a very exciting time.”

Shine could yet feature in Glasgow’s game against Hearts on Sunday, kick-off is at 1pm.

Ahead of her potential last time on the pitch today watch @ClareShine01's honest interview with @BroadcastCallum.