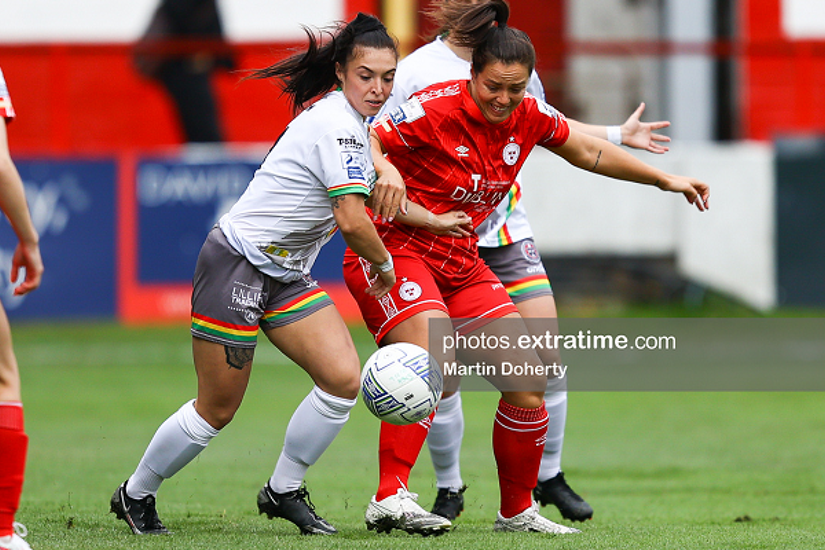 Shelbourne booked their place in a fourth FAI Women’s Cup Final in eight years with a 1-0 win over Bohemians at Tolka Park on Saturday afternoon.

A Noelle Murray penalty was enough to see the side through to their second final in a row and gives them a chance to make up for defeat against Wexford Youths in last season’s decider at Tallaght Stadium.

Noel King made two changes to his starting line-up after Shelbourne’s loss to Athlone Town last weekend with Megan Smyth-Lynch and Aoife Kelly dropping to the bench and Alex Kavanagh and Lia O’Leary starting in their place.

There was just one change to Bohemians’ starting line-up from their victory over DLR Waves last weekend with Erin Phelan starting in place of Rachel Doyle.

The first shot of the game came in the opening minute, Niamh Prior’s free kick from the right wing was cleared as far as Abbie Brophy by Keeva Keenan, the Bohs midfielder struck a snapshot, but Amanda Budden was in position to stop it.

Shels came close to pulling off a great move in the 21st minute when Jessie Stapleton switched the ball out wide to Emma Starr, she flicked the ball back inside to Abbie Larkin on the run who played the ball through to Noelle Murray inside the box.

The forward was in great position to score but the flag went up for offside – Bohemians’ goalkeeper also got her first touch of the game with a great save to stop Murray’s shot, not that it would have counted.

Another great move saw Alex Kavanagh find Larkin on the right wing, she took the ball into the box with Niamh Prior trailing behind her. Prior wound up tripping Larkin inside the box as the midfielder turned to beat her, referee Neil Doyle hesitated for a moment before pointing to the spot.

It was Noelle Murray who stepped up to take the penalty, Rachael Kelly went the correct way to stop the shot, but the ball was placed perfectly in the bottom right corner to give the home side the lead in the 28th minute.

Shelbourne could have doubled their lead when Stapleton played the ball out wide to Lia O’Leary, the winger took the ball all the way into the box with a great run before squaring the ball – it looked like it was destined to end with an easy tap in for Emma Starr only for Katie Lovely’s timely interception to allow Kelly to clear the ball from danger.

Lisa Murphy went close for the visitors in the 64th minute with a long range free kick, the shot looked like it might challenge Budden in goal but it eventually sailed just wide of the post.

Murphy was on target with a header just minutes later when Katie Burdis found her at the back post with a free kick, the defender’s header didn’t have enough power on it to challenge Budden, however.

Second half substitute Ann Marie Byrne had an effort from outside the box in the 80th minute, but Budden was able to anticipate and make the save.

The Gypsies nearly pulled off a dramatic moment in the 87th minute when Isobel Finnegan found Aoife Robinson at the back post from a corner-kick, the substitute hit it on the volley, but Keeva Keenan arrived just in time to boot the ball off the line to maintain her side’s lead.