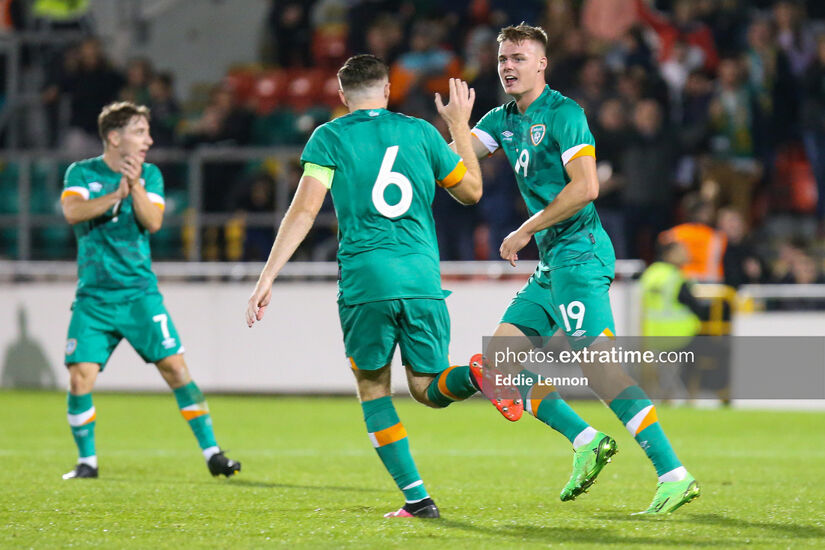 Ireland and Israel played out a highly entertaining 1-1 draw at Tallaght Stadium on Friday night and it’s all to play for when the two sides meet again in the second leg in Israel next week.

Both sides had enough chances to win the game, but a draw was probably a fair reflection of the proceedings over the course of the game.

Israel dominated possession in the opening stages of the game and Ireland found it hard to get a foothold in their attacking half of the field.

It took 10 minutes for Ireland to mount an attack and they did it through the quick feet of Aaron Connolly. He skipped past two defenders and fed Tyreik Wright, but the pass was too heavy and the ball ran over the endline.

Ireland almost took the lead in the 15th minute when Conor Coventry fed Connolly who did well to evade his marker and his shot came off the post and was cleared.

Israel responded almost immediately with a quick counter attack that saw Mohammad Kannan skim the cross bar with a shot from 30 meters.

Connolly was looking very sharp, and he had another half chance in the 18th minute when he again got past his marker and pulled a left footed shot just wide of the post.

By the 20th minute the initiative had swung Ireland’s way and they began to boss the midfield with Conor Coventry and Will Smallbone very prominent during this period.

Connolly and Wilson worked a good one two in the 30th minute which led to a corner, but Wright’s kick did not find an Irish player and Israel cleared the danger.

Ferguson won a corner in the 36th minute but again Wright’s kick was easily dealt with by the visitor’s defence.

Ireland almost took the lead in the 40th minute when Smallbone forced a great save from keeper Daniel Peretz with a powerful shot from outside the box.

Israel looked very good on the counter attack and Oscar Gloukh forced Brian Maher into a good save with a stinging shot in the 42nd but two minutes later their attacking prowess yielded the opening goal.

Maher was forced to palm another shot away for a corner in the 44th minute and ball delivered in this time found the head of striker Idan Gorno who powered a header into the net for a good goal.

Ireland forced their first free kick of the second half in the 52nd minute when Wright was fouled, this time his kick found the head of Joe Redmond whose header just flashed over the bar.

They had another half chance in the 55th minute when Smallbone’s whipped cross found the head of Connolly but he was unable to get any power on the header and it went wide.

Ireland got the equaliser in the 64th minute when Ferguson powered home a header from a corner, no more than they deserved at that stage of the game.

There was more drama in the 79th minute when Connolly was tripped by Stav Lemkin when through on goal and the Israel defender got a red card which to any neutral observers seemed a bit harsh.

The home side owned the ball for the last 10 minutes but even with the numerical advantage they were not able to breach the Israel defence and take a one goal advantage into the second leg next Tuesday.