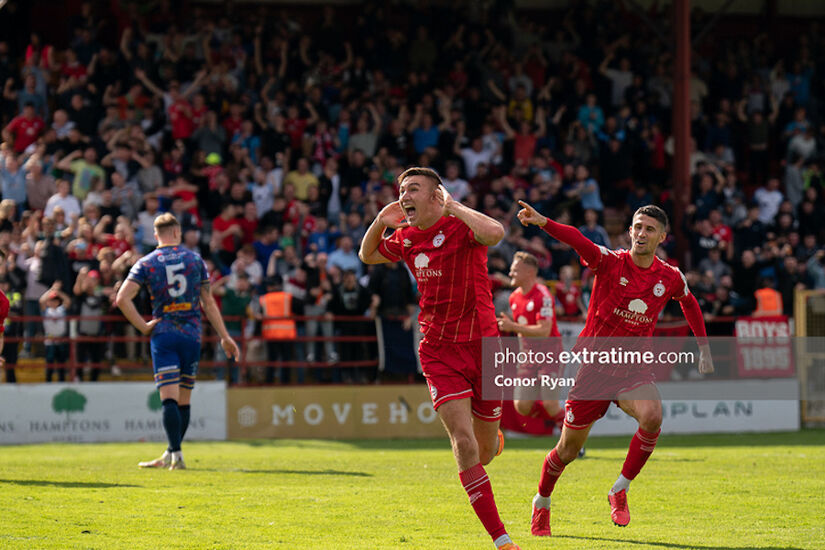 The Reds host the Hoops at Tolka Park on Thursday evening (kick off 7.45pm).

The home side will be buoyed by their 3-0 victory over Bohemians in the FAI Cup quarter-final last Sunday (on a day when Rovers were eliminated from the cup in Derry).

Sean Boyd scored a brace against Bohs and the 24-year-old striker was rewarded with a contract extension on Monday.

The former Shamrock Rovers forward will be looking to add to his tally of seven goals from 23 league appearances, to go with four strikes in the cup, when he comes up against his old club.

“It has been a great 24 hours for Sean, scoring two great goals yesterday and extending his contract today,” said Damien Duff speaking on Monday.

“I absolutely believe this is Sean’s home. The staff and players get the best out of him and he has without doubt gone to another level. He is a big part of what we want to build at Shels.”

Shelbourne’s reward for their Dublin derby win in the cup was to be drawn away from home against First Division Waterford in the semi-final as the Reds look to return to the cup final for the first time since 2011.

Awaiting the winner of that tie will be either Derry City or Treaty United.

Duff’s team have lost both games against Rovers this season. Back in April, they lost 2-1 conceding a late goal to Aaron Greene thwarting a spirited second half comeback from Shelbourne.

In Tallaght in late May, they suffered a 2-0 defeat. Shels are due in Tallaght to take on Rovers for the final time this season on Sunday 9th October.

The Reds come into the game without a win in their last five league games (three loses and two defeats) with their last win coming against UCD in July.

Thursday nights have been European nights for Shamrock Rovers this season but it is domestic action for the Hoops this Thursday evening.

Rovers are using the international break to play their two games in hand over Derry City – with a trip to Tolka Park followed four days later by Monday’s home match against UCD. The Hoops will be looking to get maximum points to go seven points clear of the team who knocked them out of the cup in extra-time in the Brandywell at the weekend.

"We're obviously disappointed because it's a competition we wanted to win,” said Hoops Head Coach Stephen Bradley speaking about going out of the FAI Cup at the quarter-final stage in successive seasons. “Everyone was frustrated and really disappointed afterwards."

The Hoops weren’t helped by Lee Grace’s red card in the first half in Derry. Bradley accepted that the defender’s challenge was a penalty (which was missed) but was not happy with the sending off which leaves his team light at the back for this league game as Pico Lopes and Sean Hoare continue to be doubts through injury.

"I think if the incident (with Lee Grace) happened for you, you'd be screaming for a penalty kick. I can understand why he's given the penalty but it's never a sending off. I think that's a terrible decision from the referee."

Bradley described his team’s performance prior to the red card as “really poor” but that his team were “excellent” when they went down to ten men.

"The players were brilliant. The character they showed, their desire and work rate. You couldn't fault any player in the team. They did so well to get back in the game and stay in the game. Unfortunately, we didn't have enough to go on and win it.”

The Hoops have three league games over the next ten days before they are back in European Thursday night action (Molde away being their next Europa Conference League game).

"We know that this is a big week for us, the next three games but this is what you want. They're games we want to go and try and take maximum points from, but we also know that they'll be difficult. We can't start like we did in Derry or Gent or we won't win either game but if we hit our levels we can go and win all three.

"Shels have just come off the back of a brilliant and deserved 3-0 win so we know that they're coming into the game full of confidence. Our aim is to try and impose ourselves on the game as soon as possible. There'll be a big crowd and they'll be up for it so it'll be difficult."

The last time Shamrock Rovers lost a competitive first team game to Shelbourne in Tolka Park was the 2-1 defeat in the 2012 FAI Cup quarter-final. Philly Hughes got both goals for the Reds that day. Sean Gannon scored late for the Hoops in that match which saw Stephen Glass in temporary charge of Rovers following Stephen Kenny’s departure from the club.

Rory Gaffney is Rovers’ top scorer in the league (8) and in all competitions (12).