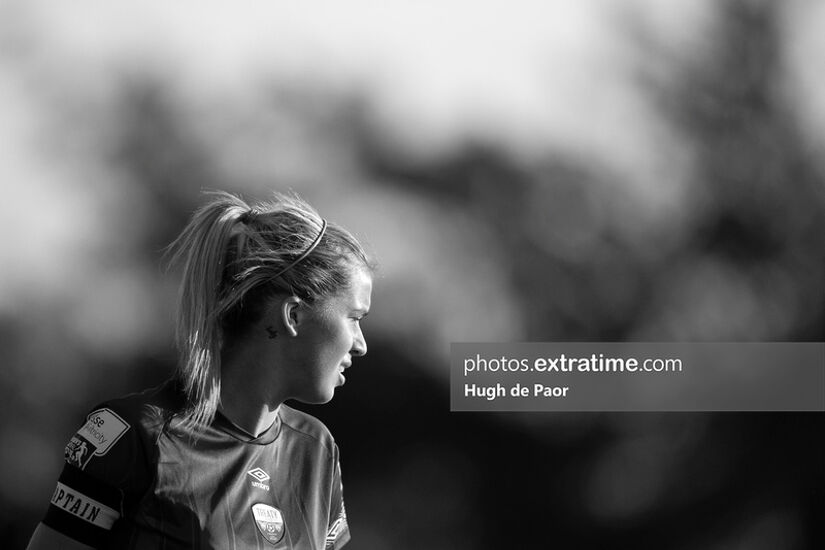 Gallery from the game by Hugh de Paor

Wexford Youths took advantage of Shelbourne’s unexpected defeat to Athlone on Saturday evening with the Youths now sitting four points clear at the top of the Women’s National League after a comfortable 3-0 win over Treaty United.

Wexford dominated the game from the off, with Treaty struggling to settle in.

It took just five minutes for the home side to take the lead when midfielder Edel Kennedy produced a sensational volley which landed in the top left of the net. An excellent opening bout of possession and play led to the ball being in the right place at the right time for Kennedy who struck it sweetly for an early 1-0 lead.

Trish Fennelly was kept busy in the goal for the evening, after several attempts from the home side to increase the scoreline. Della Doherty had two near opportunities from close range which were both headed over the bar during the early stages of the first half.

A scare for fans of the home side came in the 21st minute when Republic of Ireland midfielder Ellen Molloy went down with an injury after what looked like a knock to the left knee. Fans will be keeping an eye on the progress of Molloy’s recovery as the talented playmaker is currently the joint top scorer in the league this season with 16 goals.

Molloy’s replacement, Michaela Lawrence, was excellent throughout and created chances along with being a threat on goal for the remainder of the game. Treaty, who have no points from their previous five encounters, struggled to keep up with the pace of the league leaders.

Alannah Mitchell did a fantastic job of keeping any potential shots from the Youths at bay but the home side struck their second of the night when Kylie Murphy headed it in from close range. It was Aoibheann Clancy who whipped in a wonderful curled ball from the corner which found the head of Murphy; the Youths captain scoring her 101st league goal to secure a comfortable lead for the home side.

The third goal came just before the half time mark when Fennelly, who was the busiest player of the night, passed the ball out from the goal line however none of her defenders were ready to take the ball and Jess Lawrence pounced on the opportunity to take possession and place it to the feet of Ciara Rossiter, who is in excellent form as of late. It was a calm effort from Rossiter who placed the ball into the bottom right corner with ease.

The tempo for the second half was much the same, albeit the lack of goalmouth action. Treaty did have a couple of chances after a knock in the box led to a free kick from close range.

A test for Wexford’s substitute goalkeeper Claudia Keenan who replaced Maeve Williams late on but the chance was blasted straight at the wall by Emma Deegan. Ezra Kengal also had a good chance to break down the Wexford defence when a late sliding attempt at a relatively open goal went in the wrong direction and out of play.

Wexford were comfortable right up until the end and even though no goals were scored in the second half, there were plenty of opportunities.

Treaty remain bottom of the league with one point and Wexford sail four points clear at the top. The next few weeks will be crucial for the title race along with the FAI Cup semi-finals to contend with next weekend.