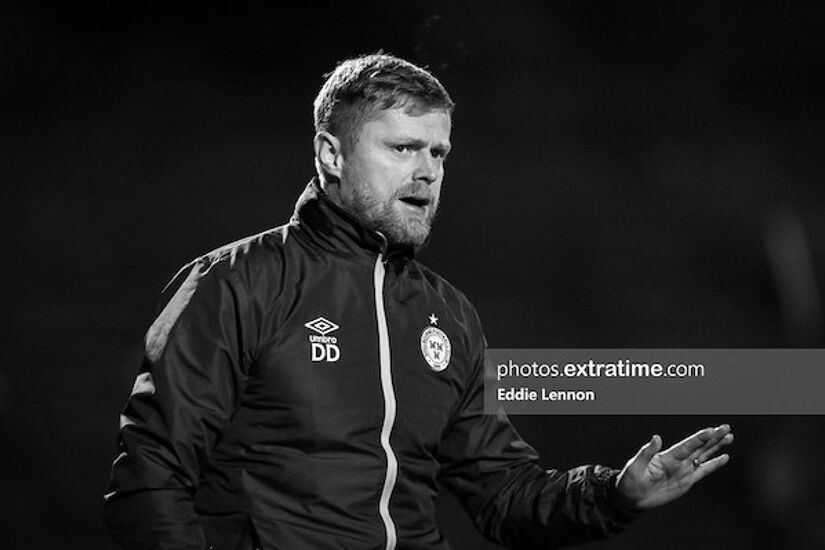 Bohemians were held to a 1-1 draw against ten-man Shelbourne when they visited Tolka Park for the Northside Derby on Friday night.

Tyreke Wilson put the home side in front early in the first half but a second half penalty scored by Shane Farrell ensured the northside neighbours would share the points on this occasion.

Shelbourne had three changes from their 3-1 loss away to Drogheda Untied last weekend, Kameron Ledwidge, JJ Lunney and Sean Boyd all made way for John Ross Wilson, Aaron O’Driscoll and Brian McManus.

Keith Long made a few changes of his own for this Northside Derby with Tyreke Wilson, Rory Feely and Kris Twardeck all starting in place of Laurenz Dahl, Josh Kerr and Jordan Doherty.

The Gypsies manager made one further big call after their 1-0 loss to Dundalk last weekend with goalkeeper Jon McCracken, on loan from Norwich City, making his debut for the club while Tadhg Ryan dropped to the bench.

It was a full blooded affair from the off in this derby game with several high octane challenges flying in, Aaron O’Driscoll wound up taking down Ali Coote on the edge of the box in the fifth minute with the defender receiving a yellow card for his trouble from referee Neil Doyle.

Tyreke Wilson struck the resulting free-kick and he beat Brendan Clarke well with a looped ball over the wall and into the bottom right corner of the net for the lead.

O’Driscoll’s night then came to an unfortunate end minutes later when he and Clarke collided on the edge of the box when coming for a ball – the defender received lengthy treatment on the field before being stretchered off with Kameron Ledwidge coming into the fray after a long delay.

Shels finally created a couple of chances midway through the first half with Jack Moylan and Matty Smith linking up well.

Smith fired just wide of goal in the 26th minute after a great through ball from Moylan and then just a minute later he drew an excellent save from Jon McCracken with a long range effort that looked destined for the top corner.

Shane Farrell had an effort minutes later, again from long range but the midfielder sent the ball inches wide of the post.

The visitors went close in the 44th minute when Ethon Varian held the ball up in the box when Coote found the forward from a free-kick he teed up James Clarke who shot low and hard, but Clarke was able to dive and make the save.

It then went from bad to worse for Damien Duff as the game ticked into injury time in the first half, a goal down and having lost O’Driscoll to injury, John Ross Wilson received a straight red after a poor challenge on Bohemians’ Declan McDaid.

To the home side’s credit, they came out at the start of the second half undeterred, and the introduction of Aodh Dervin seemed to give Duff’s men a lift in the centre of the park.

They were rewarded in the 55th minute when Jack Moylan was bundled over in the box by Ciaran Kelly, Neil Doyle made no hesitation as he pointed to the spot to award the penalty.

Shane Farrell dispatched the penalty kick, McCracken guessed the right way but the force from the shot safely rattled the back of the net to bring the side level.

The Reds came so close to adding a second in the 67th minute when JJ Lunney fired off a shot from distance, again this ball looked like it would rattle the top corner, but McCracken came up big on his debut once more with a stunning save to deny the home side.

Some extended pressure by Bohemians lead to a good chance in the 75th minute for the visitors, Ali Coote took it on after the ball was worked back across from his corner-kick on the right, Clarke was able to get down and make the save, however.

John O’Sullivan set second half substitute Max Murphy up for a snapshot on the edge of the box in injury time but he couldn’t keep his effort down and the ball sailed over Clarke’s goal.

The visitors had a very late free-kick from long range, but the Reds held strong to clear the ball away and secure a point.