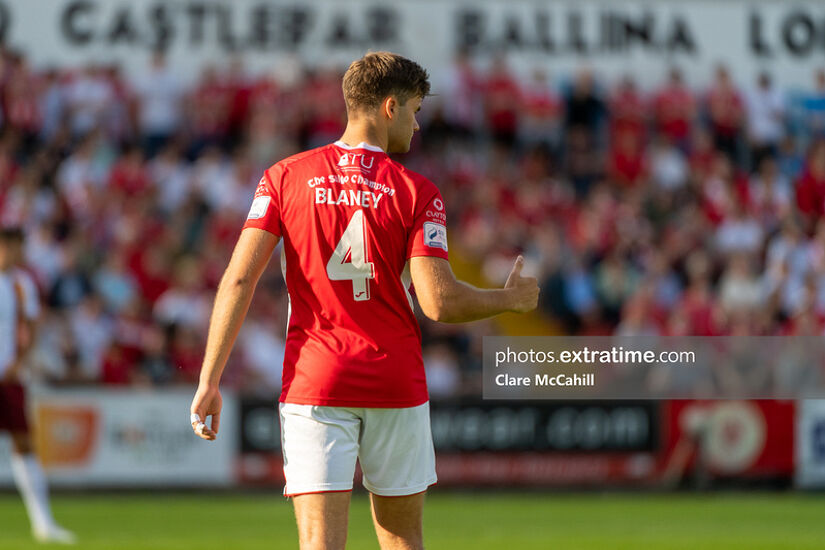 Sligo Rovers' Shane Blaney will be looking to put one over on his former side at Finn Park Credit: Clare McCahill (ETPhotos)

Finn Harps host north west rivals Sligo Rovers at Finn Park on Friday night with an 8pm KO looking to pick up a valuable three points which would see them putting pressure on UCD at the bottom of the table.

Ollie Horgan’s men currently occupy tenth spot in the table and have picked up one win in their past thirteen games- a three nil win over Drogheda United at Finn Park a fortnight ago. Nine of their fifteen points earned so far this year have been at home.

Last week they travelled to Belfield to take on UCD in a match which saw the Students take all three points and leapfrog Harps at the foot of the table. Filip Mihaljevic’s penalty opened the scoring before Donal Higgins converted a rebound to level the scores. Despite suffering a Dara Keane red card in the second half, a fine strike from Evan Caffrey saw Andy Myler’s men take the spoils and keep alive their hopes of avoiding automatic relegation.

Another new signing, netminder James McKeown, was in fine form between the sticks during the Drogheda United win and Harps will be looking for another strong performance as the Candystripes arrive in Ballybofey on Friday evening. American striker Eric McWoods has five league goals so far this season and found the net twice in the victory over Drogheda United.

The Bit O’ Red bounced back impressively from their European exit a fortnight ago with a come from behind victory against Bohemians, courtesy of a brace from New Zealander Max Mata.

However, last week they failed to capitalise on that victory and slumped to a 1-0 victory away to St Patrick’s Athletic- debutant netminder Danny Rogers made a couple of fine stops late in the game to keep the hosts ahead but Sligo drew a blank for the third time in their last five games.

Top scorer Aidan Keena has taken the league by storm since his return from Scotland. The Westmeath native leads the goalscoring charts with ten goals from eighteen league starts- five of these goals have been against Harps. He missed out on the St Pat’s defeat last week, however could be back in contention for this fixture.

David Cawley is another who could be back in the match squad but Colm Horgan, Gary Buckley and Seamus Keogh are definitely ruled out.

Speaking with his club media on Thursday, John Russell previewed the game.

‘’We know tomorrow evening is going to be a tough game.

‘’Finn Harps are fighting for survival and they always play well at home.

‘’They’ve got good players and they were extremely unlucky not to win last week.

‘’We were disappointed not to come away with something in our last game but tomorrow is another opportunity for us to perform well and try and close the gap on the teams above us. There are still a lot of games to be played and there will be plenty of twist and turns ahead. The players know how important this fixture is’’

Sligo Rovers remain unbeaten against Finn Harps this season with 3-0, 3-1 and 1-0 victories respectively. However, these seven goals were all scored by two players- Aidan Keena (5) and ex Finn Harps winger Karl O’Sullivan (2).

Finn Harps Assistant Manager Gavin Dykes spent a number of terms in the Sligo Rovers dugout while he also lifted the FAI Cup as Bit O’Red skipper. His last game as caretaker manager in charge of Sligo was in 2015 where he selected Richard Brush and David Cawley in the starting lineup and both players will be in opposition tonight.

Goalkeeper Richard Brush has lined out for both Finn Harps and Sligo Rovers in a storied League of Ireland career which also saw him spend time with Shamrock Rovers and a period in the Northern Irish league with Ballinamallard and Cliftonville.