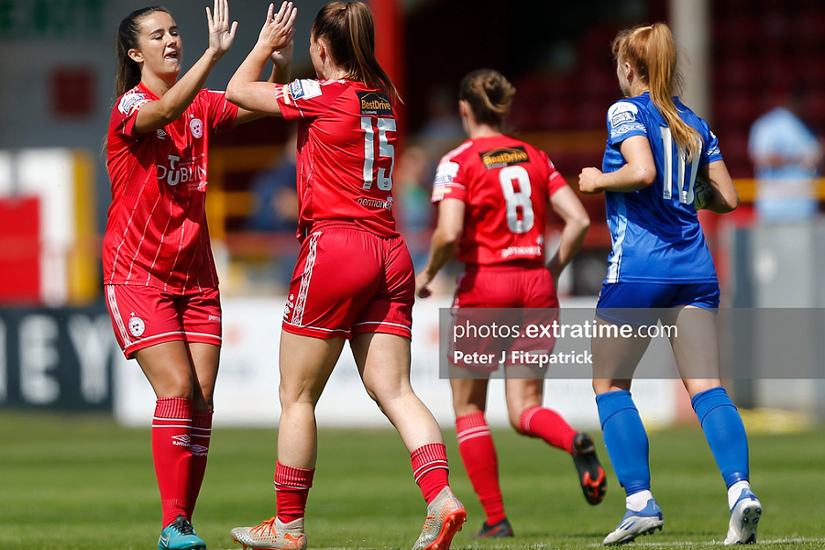 Shelbourne returned to winning ways with a first victory in four games when they ran out 4-0 winners over Treaty United at Tolka Park on Saturday afternoon.

First half goals from Alex Kavanagh, Emma Starr and Jemma Quinn and a second half goal from Megan Smyth-Lynch were enough to give the Reds the three points and a win before they face into Champions League action this coming week.

Noel King opted for just the one change from their FAI Cup win over Peamount United last weekend with Amanda Budden dropping to the bench and Courtney Maguire coming in to make her first start for the Reds.

It had been two weeks since Treaty were last in action as they had no cup game last weekend, Don O’Riordan opted for five changes from their previous league game against Wexford Youths with Emma Deegan, Shannon Parbat, Shannon O’Donovan, Nessa Markham and Naoise Griffin all starting in place of Alannah Mitchell, Esra Kangal, Amy Madden, Kelsey Wing and Laoise Browne.

It took just five minutes for the hosts to take the lead in this contest – referee Alan Carey blew his whistle when Heather O’Reilly was fouled on the edge of the box in a dangerous position and Alex Kavanagh dispatched the free-kick into the top corner leaving Michaela Mitchell no chance to save.

Emma Starr doubled the lead just three minutes later when she managed to go unnoticed in the Treaty box and strike a low cross first time into the bottom right corner for her first goal for the Reds since she signed in July.