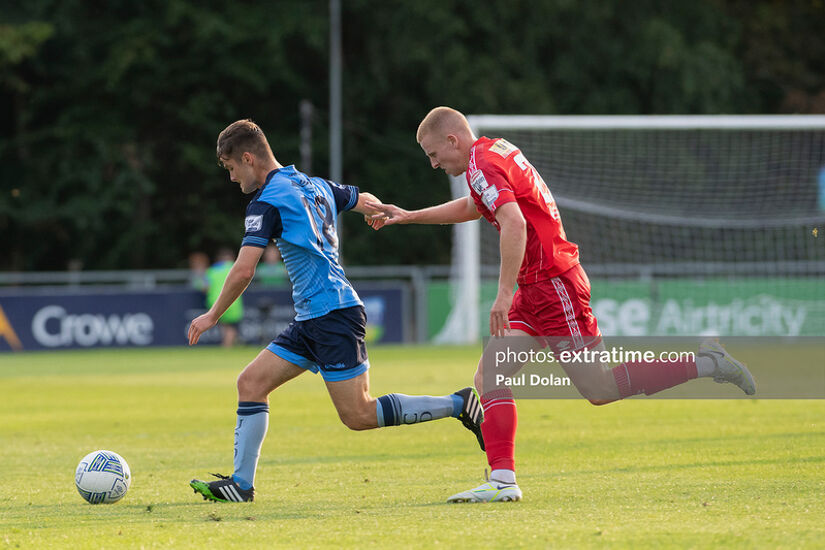 Donal Higgins opened the scoring for UCD in their victory over Finn Harps at Belfield Credit: Paul Dolan (ETPhotos)

Finn Harps missed a great opportunity to go five points clear of fellow relegation candidates UCD when they lost by 2-1 despite having an extra man for the bulk of the second half of the match at Belfield.

UCD now come off the bottom of the table and while there is still only one point separating the sides,the psychological advantage certainly has swung the way of UCD, in the short term at least. As well as losing the three points, of bigger concern to Harps manager Ollie Horgan will be the failure to show enough guile and creativity to take advantage of the dismissal of UCD’s Dara Keane in the 52nd minute of the game.

The Donegal side actually started the game on the front foot, with Barry McNamee the fulcrum of most of their attacks in midfield and the hard- working striker Eric McWoods casing lots of problems for the UCD defence.It came as no great surprise when Harps capitalised on their dominance early on, taking the lead in the 18th minute albeit from a fortuitous penalty.

Dara Keane and Ethan Boyle tussled for the ball in the UCD box following a Regen Donelon free kick, and when the Boyle went to ground, referee Derek Tomney awarded a penalty to the visitors, much to the surprise of both the UCD players and supporters. Keane also earned a yellow card for the offence and this was to cost him dearly early in the second half after a second offence.

Filip Mihaljevic stepped up to take the spot kick and he very cooly found the bottom right-hand corner after Lorcan Healy had dived in the other direction.Harps had a great opportunity to build on that early lead but the goal had the opposite effect, sparking UCD into life and within three minutes they drew level.

Donal Higgins was quickest to react when a shot came off the post in the 21st minute and he slotted it past Jamie McKeown from two meters out to make it 1-1. The Students grew in confidence after the equaliser but both sides continued to be very attack minded with Harps having probably the best of the remaining chances in the first half, Eric McWoods firing wildly over the bar in the 38th minute when he should at least have hit the target.

The decisive moment of the game arrived early in the second half with the dismissal of Keane. He contested a high ball with Conor Tourish and appeared to catch the Harps full back with his elbow, earning a second yellow followed by a red card from Tomney. Tourish was unable to continue and had to be replaced by Jose Carillo.

The incident seemed to galvanise UCD as they began to dominate the game and created an opening for Evan Caffrey to score a superb goal in the 58th minute. The Students retained possession along the left flank before working it infield to the oncoming Caffrey who unleashed a great shot from 30 metres, the ball nestling in the top left -hand corner of the net.

Harps appeared shell shocked by the goal and then proceeded to become more ragged in their play, frequently resorting to long balls into the box which were capably dealt with by the home defence. There was an additional six minutes of play added on at the end of the 90 minutes, but despite bombarding the UCD goal with high balls they lacked the craft to score an equaliser and can have no complaints about leaving the South Dublin venue empty handed.

The battle for survival continues for both sides next weekend with UCD hosting St Patricks Athletic at home and Harps staging a north west derby against Sligo Rovers in Finn Park.