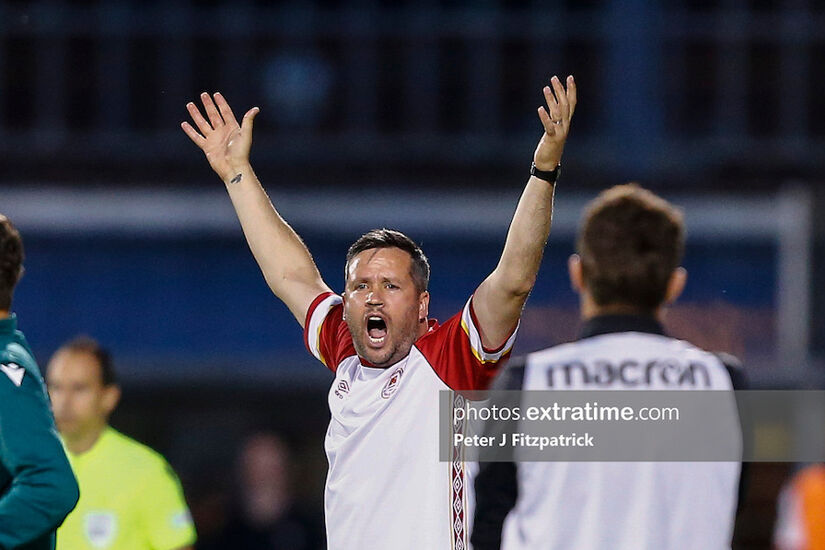 Tim Clancy: ‘The ref was quick to put his whistle in his mouth and give the bigger club the decision’

The 2-0 loss on the night to CSKA Sofia (2-1 on aggregate) saw them eliminated from the Europa Conference League qualifiers one round before the play-off.

It was a tasty affair in Tallaght Stadium that saw 11 bookings (including one for Clancy) and two red cards after the final whistle was blown.

The tie was over by then and it felt like one that got away for Clancy who was frustrated with the chances his team missed and the decisions made by Romanian referee Horatiu Mircea Fesnic.

“The second goal was a killer,” said Clancy about a goal that came from a dubious freekick awarded for what the referee said was a foul by Serge Atakayi. “I've no idea why it is a free kick.”

When the ball came into the Saints box when the referee blew the whistle most people in the ground saw it as a free out but Ivan Turitsov dispatched the penalty for the decisive goal of the tie.

“When you look at it back, we've seen it on the video, it looks like it their player's hand first before it hits Harry's hand. So again (the ref) was really quick to put his whistle in his mouth and give the bigger club the decision. I went in to speak to him there afterwards but I wasn't allowed.

“It is frustrating as the difference between the two teams over two legs is a penalty that shouldn't have been given and a corner.

“At this level of football if you create those chances you have take them. Their keeper made a few good saves. We knew tonight if we were to progress we needed to take those chances.

“The players were outstanding in the four games we had in Europe this year. I thought we played excellently in all those games.”

The post-match melee that saw the two red cards was described as “chaos” by Clancy with Jamie Lennon saying how his team weren’t happy with the CSKA celebrations.

“It was probably just frustration from both players,” said Lennon. “Yer man was celebrating in front of our fans. I don't really like that.”