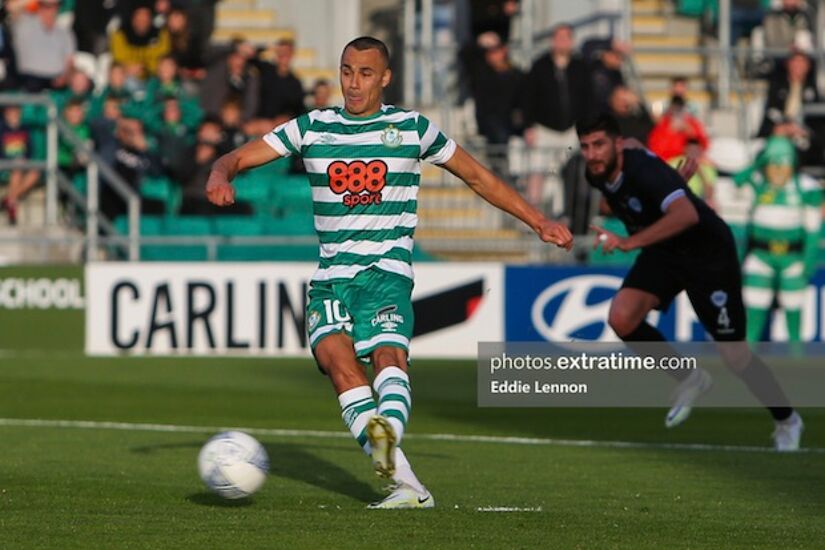 A stunning 96th minute strike from Gary O’Neill ensured Shamrock Rovers put one foot into the playoff round of the UEFA Europa League after they beat North Macedonian outfit FC Shkupi 3-1 in the first leg of their third qualifying round tie on a sensational night in Tallaght.

The midfielder curled the ball into the top corner from the edge of the box with the last kick of the game to send the South Stand into raptures.

Shamrock Rovers appeared to be coasting into the playoff round after they roared into a two-goal lead inside a half an hour. The first coming from the spot courtesy of Graham Burke before Dylan Watts finished off a clinical team move.

However, Shkupi fought like the lions they promised in the second half and deservedly dragged themselves back into the tie with a thunderous strike from Queven Da Silva.

However, O’Neill’s late strike gives Rovers a great opportunity to guarantee themselves Conference League football for the season if they can see out the tie in Skopje and they also owe a deal of debt to Alan Mannus who produced four superb saves in both halves.

Shkupi were somewhat ‘shkuppered’ on their journey to Tallaght Stadium and after the Macedonian club released a rather comical statement brandishing the Irish government as ‘evil’ anticipation was high to see what sort of team would show up, when they eventually arrived.

In truth, the Macedonian outfit should have stayed on the runway in Shannon Airport as they were turgid at best in an opening half, dominated by a vibrant Hoops side. After promising in their statement to be like ‘lions on the field’, they delivered a first half performance akin to a vulnerable gazelle, but Tallaght Stadium would hear their roar in the second period.

Rory Gaffney toyed with the visiting defence all evening including a wonderful piece of chest control from a looping Mannus kick and he should have put the hosts a goal up.

After some great pressing from Watts it allowed Gaffney to steal a march on the Shkupi defence. He had the option of chipping Kristijan Naumovski or putting Burke in. In the end, he dithered on the ball and did neither but Rovers wouldn’t have to wait long to break the deadlock.

From the resulting corner Andy Lyons was upended in the area by Diene and Burke stepped up to calmly slot the ball into the left corner for a deserved lead in the 12th minute and his seventh goal for Rovers in Europe.

The home side were dominant, roared on by the buoyant South Stand following, and they pressed for a second goal and were rewarded in sensational style.

A silky team move saw Rovers move the ball flowingly with Burke and Gaffney combining before the latter played Watts in who finished the ball like an experienced marksman for his second strike of this European campaign.

Shkupi created little in the way of opportunities but Mannus did well to deny Freddy Alvarez from a free kick and star man Sunday Adetunji either side of the interval.

The North Macedonian champions were a different animal in the second half though and showed that they are a very capable and technical side despite their relative infancy in European competition.

Mannus made it a hat trick of excellent saves with a simply terrific stop to deny Queven whose 30yard effort looked destined for the top corner.

Richie Towell was introduced on the hour for the injured Chris McCann and he almost made an instant impact when he teed up Watts on the edge of the box but Naumovski expertly denied him a second of the game.

The hosts undoubtedly took their foot off the gas and a lapse of concentration in defence looked to have given the visitors a way back into the game but Mannus stepped up again with his fourth and definitely his best save of the game to deny Adem Ali a certain goal from close range.

The entire Shkupi bench collapsed to its knees in disbelief while the Tallaght Stadium rose to their feet to chant ‘super keeper.’

Queven who was denied earlier in the half by Mannus got the goal that his side deserved after their spell of dominance after the interval. His 77th minute shot from distance dipped and swerved, ultimately outfoxing Mannus who could only flap at the ball as it evaded his fingertips.

O’Neill was one of the standout performers for the 19-time League of Ireland champions, going close just after the interval and he had a hand in Shkupi being reduced to ten men after being on the receiving end of two clattering challenges from Hamidi, who was given his marching orders by the Polish referee.

Sean Hoare then went galloping through the heart of the Shkupi midfield with some Lionel Messi-esque dribbling before his blistering effort was tipped over.

Shkupi had been happy to waste time with Naumovski needing treatment on a trio of occasions which resulted in six minutes of injury time which proved costly for the visitors.

Hoare had a hand in O’Neill’s stunning third. From the corner off his shot, he teed up his teammate on the edge of the box, one touch from O’Neill, bang, pandemonium and a third goal which could prove vital next week.

It was a goal the Hoops didn’t deserve based on their second half performance but it ensured Shkupi left Dublin with their tails between their legs as they make the long journey back – first to Shannon – and North Macedonia.