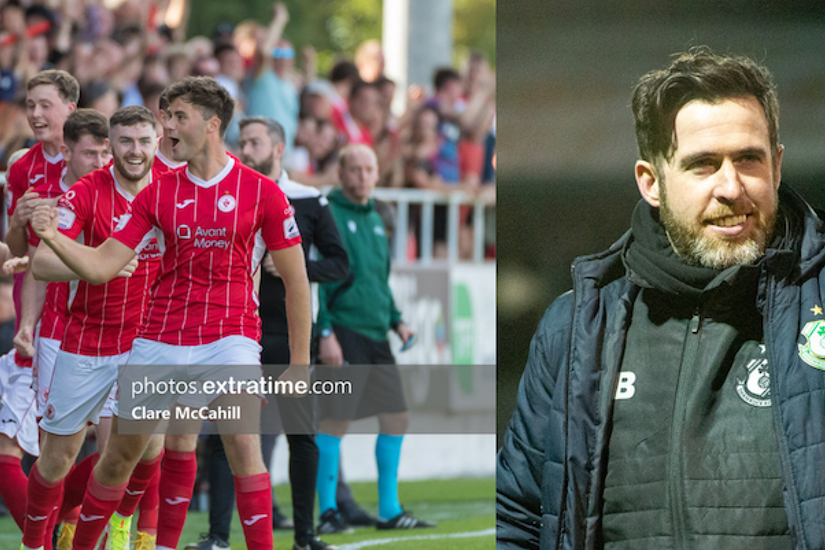 Stephen Bradley on the LOI club’s recent positive European results: ‘Hopefully all three of us can go again’

While Shamrock Rovers were eliminated from the Champions League qualifiers on Tuesday (4-2 on aggregate), they beat Ludogorets 2-1 in the second leg in Tallaght Stadium pushing the 11-in-a-row Bulgarian champions close.

The Hoops still have another two rounds in Europe as they now drop in the Europa League third qualifying round.

Sligo Rovers backed up their 1-0 first leg away win in Finn Park, by dumping Scottish Premiership side Motherwell out of the Europa Conference League qualification with a 2-0 home win in the Showgrounds.

St. Patrick’s Athletic joined them in the third qualification round of the Europa Conference League. They drew their first leg against Mura 1-1 at home and, after the second leg in Slovenia ended scoreless after 120 minutes, Pat’s prevailed on penalty kicks.

All three League of Ireland sides are back in European action on Thursday. The Hoops play North Macedonian Shkupi in Tallaght, while Sligo Rovers travel to Norway to take on Viking and Pat’s play away to CSKA Sofia.

Could all three side emerge victories in the next round? Hoops Head Coach Stephen Bradley says that should be the aim.

“Lets think we can go do it, the whole three, why not? Are they tough games? Yeah. They’re going to be at this stage in Europe. I said for quite some time that I believe the league is going up. I think we’ve seen that as a whole. They’re tough tough games but there is no reason why we can’t go and win them.

“Last week’s result didn’t surprise me to be honest. The Pat's one is a great win over there (on penos). It is a tough place to go and get a result.

“Sligo is a great win but it didn't surprise me. When the draw was made I fancied them. When you watch the teams and how they play, you wouldn't be worried and to be fair to Sligo they handled them quite comfortably in both legs. It was a great win and a really positive week for the league.

“Maybe its the Irish public in general that don’t go to games quite regular would see a team (Mura) that beat Tottenham last year and think ‘right, that’s it done for Pat’s.’ But over the two legs, they full deserved to go through. It just shows the quality in the league, it’s going the right way, and hopefully all three of us can go again.

Bradley was speaking after Rovers’ 4-0 first round FAI Cup win over Bangor Celtic where he gave Dan Cleary and Simon Power debuts after they joined the Hoops during the week.

While Cleary had played four 90 minute pre-season matches with St. Johnstone before his move to Rovers, Bradley admitted it will take time for Power to build up his fitness.

“You can see Dan is ready to go. Simon on other hand, we just need to build up, show him how we do things and how we play. He only came in to us Thursday morning and so over the next few weeks we just need to be patient.

“We know that Simon’s attributes will be really important for us. Like when we got Danny (Mandroiu), it is just tweaking him to our style and make him understand how he is going to be dangerous. We will go through that with him on the pitch and with video work over the next few weeks.