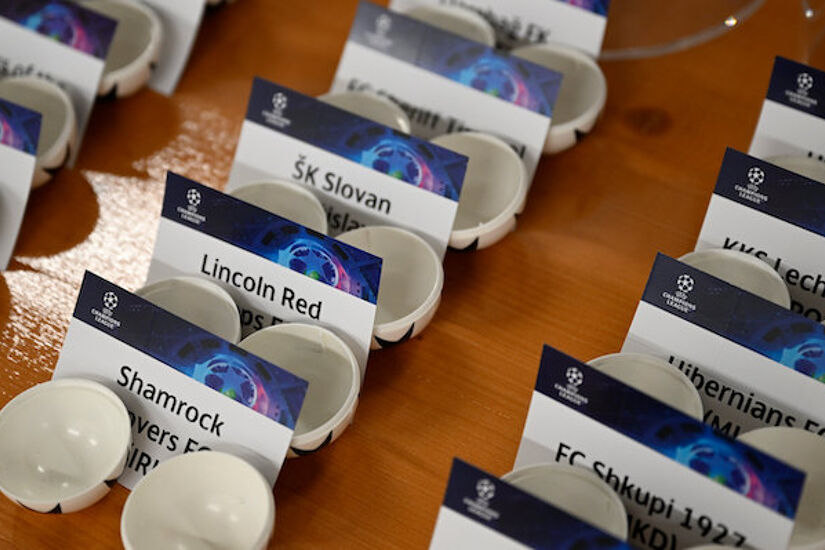 Shamrock Rovers play the first leg of their Europa League third qualifying round tie against Shkupi on Thursday in Tallaght Stadium (kick-off 8pm).

The North Macedonia champions came into existence just a decade ago after an amalgamation of Sloga Jugomagnat and FC Albarsa.

Shkupi finished league runners up in 2020/21 and last season they topped the 33 game campaign by a dozen points losing just three matches (all away from home).

They have qualified for Europe in each of the last five seasons but this year was only the second time they won a tie.

In 2018, Rangers beat Shkupi 2-0 on aggregate in the first round of the Europa League qualifiers.

They went out again in the first round in the following two seasons - to Pyunika from Armenia (5-4 on agg) and Azerbaijani side Neftci (losing 2-1 away in the one legged Covid-19 amended tie).

Last year in the Europa Conference League qualifiers they won their first European tie – defeating Llapi from Kosovo 3-1 on aggregate (winning 2-0 at home and drawing 1-1 away_ before their elimination in the next round 5-0 to Santa Clara from Portugal.

The Macedonian First League has yet to start. Shkupi’s first league fixture is away to Tikvesh on Sunday 7 August.

In Europe this season in the first round of the Champions League they eliminated Lincoln Red Imps after winning 3-0 at home in the first leg but losing 2-0 in the second leg.

They then ran the highest ranked side in the second qualifying round very close – drawing the first leg against Dinamo Zagreb in Croatia 2-2 thanks to a last minute equaliser from Renaldo – that’s Jamaican Renoldo Cephes - before losing the second leg at home 1-0.

What does Hoops Coach Stephen Bradley say about Shkupi?

“The first game against Dinamo, they should have won the game over in Zagreb,” said Bradley.

“They were beaten 1-0 last Tuesday but they were well beaten. They’re very dangerous in the attacking part. They have real pace and power. Both wide boys are very quick. They are dangerous and they showed that over in Zagreb.”

Bradley name checked a few of their players including Nigerian international Sunday Adetunji who was top scorer in the Macedonian league last season scoring 20 goals. He scored in their first leg 3-0 European win against Lincoln Red Imps.

“Their centre forward (Sundat Adetunji) is very quick and is a real handful,” said Bradley. “He is 6ft 3in and he can run. They have a Brazilian in midfield who can play (Queven).”

There are a host of Macedonian internationals in their squad including goalkeeper Kristijan Naumovski, defender Xhelil Abdulla and right back Vladica Brdarovski.

Goce Sedloski is the main man in the dugout. His playing career was spent with Hadjuk Split (winning three league titles), a short spell at Sheffield Wednesday, then Dinamo Zagreb and Austrian side Mattersburg.

He earned 100 international caps for Macedonia and played in the infamous ‘I had a Macedonia’ Ireland defeat in April 1997. The 3-2 home win in Skopje derailed Ireland’s attempt in qualifying for the 1998 World Cup.

In the upcoming Europa League qualifier Shamrock Rovers face a Shkupi side managed by Goce Sedloski - he was part of the Macedonian national team who beat Ireland 3-2 in 1997 #Ihadamacedoniahttps://t.co/eBH0BOian2

As manager with Vardar he won the two Macedonian league titles. He took over at Shkupi in April last year and took them to the title.

Bartosz Frankowski from Poland is the referee for the upcoming game in Dublin 24. He took charge of Dundalk’s draw with Qarabag at Oriel Park in 2019 and Cork City’s 1-1 draw with Linfield in 2016.

Shkupi home ground is the Cair Stadium in the Macedonian capital of Skopje. However, the second leg is going to take place 33,000 capacity Tose Proeski stadium.

Unlike for the trip to Bulgaria in the last round, when the Rovers travelling party went by scheduled flights and in separate groups, the Hoops will travel by charter for this game. Clubs are required to do this for the third qualifying rounds in Europe.

Also, unlike in the first round when they flew out of Shannon, they have secured a slot to fly out of Dublin Airport.

The draw for the Europa League play-off will take place on Tuesday.

The losing side will drop into Champions path of the Europa Conference League. That draw also takes place on Tuesday.