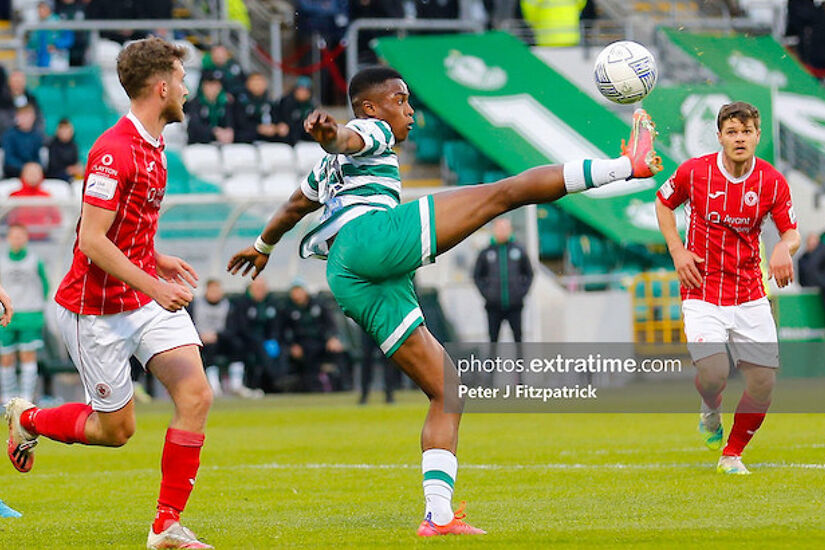 Shamrock Rovers’ 4-0 FAI Cup first round win over Bangor Celtic on Friday was their biggest victory since October 2020. 18-year-old Aidomo Emakhu was man of the match with an assist and a goal.

That was his goal in three different competitions in Rovers’ last three games after scoring in Europe against Ludogorets and against Drogheda United in the league.

The Hoops sit seven points clear at the top of the league table with a dozen games to go and a three-in-a-row of league titles for the Hoops is very much in their hands this season.

If opposition fans are looking for crumbs of comfort in Rovers not continuing their league domination over the next few years, it is the age of their squad which has seven players in their 30s and one in the 40s.

On the LOI Central podcast recently Daniel McDonnell made an interesting age profile comparison with the dominant Dundalk side of 2016. Rovers had an average age for their starting XI against Ludogorets of 30, compared with Dundalk’s 26.5 for their win over BATE in 2016; excluding the goalkeepers Mannus (40) and Gary Rogers (34) the comparison is 29.1 to 25.8.

extratime.com looked at the age of the Rovers team who lost to Copenhagen in the equivalent round of Champions League qualifiers in 2011 en-route to the Europa League group stages.

The Hoops team then had no 30 year olds and had an average age of just 24.7. That side won back-to-back titles but of course fell apart in 2012 and the club didn’t win another title till 2020.

If the Hoops are to continue with league dominance and improve in Europe, they will need to bring younger players into their starting XI over the next couple of seasons – particularly if 21-year-old Andy Lyons leaves for Blackpool. The signings last week of Dan Cleary (26) and Simon Power (24) is a step in the right direction but crucially so is bringing players in from their academy.

Last season, then 17-year-old Aidomo Emakhu scored in Europe against Teuta in  Tallaght – the youngest ever scorer of a Rovers European goal. The striker has had limited starts for Rovers this season and only scored his first goal of the year in the last fortnight.

Including the President’s Cup, he has made 21 appearances for the Hoops this season – all but three of those appearances were off the bench. However, he has hit goalscoring form in the last three games.

“It was a very slow start from myself and was very frustrating,” said Emakhu about the beginning of his 2022 campaign. “It was just a lack of confidence. I don't think I was myself at the start of the season. In the last while, I'm only getting back to myself.

“You need confidence to be able to do your thing. It's good to be getting that confidence back and a bit of form. Hopefully I’ll follow up on it now and keep going until the end of the season.”

For the first half of the year, Emakhu was combining training and playing with Rovers with his Leaving Cert studies.

“It was tough to balance education and football but the support of the club really helped me. Sometimes I just felt a bit drained and it was affecting me on the pitch, keeping up my studies and being able to train full-time as well but it was only for a couple of months. I feel very confident about what results I get but I'm just glad I can focus on the football now full-time.”

Rovers have a number of players combining training and education with Ashfield College from transition year up to Leaving Cert.

At the end of May, the club held a graduation ceremony for the nine boys who were part of Rovers’ transition year programme run in from a classroom at the club’s training base at Roadstone. Next year’s transition year will include five girls from the club’s under-17 team.

Emakhu meanwhile continued his studies in his local school - Moyle Park College in Clondalkin. He trained with the Rovers first team from 10am till 2pm and was then in school from 3pm to 7pm.

“The school and Shamrock Rovers communicated very well in terms of helping me make sure I was keeping up my studies and the classes I missed for training. It was tough but it had to be done. Not a lot of lads get to play full-time football and focus on the education side of it as well. I'm very grateful to my club and my school.”

He said both himself and his family were keen for him to focus on his education. “I think it was more knowing what could come down the road if, God forbid, I got a bad injury or something like it. I don't like saying Plan B or anything like it, but you need something to fall back on when you finish playing.”

In last Friday’s FAI Cup game, including Emakhu, the Hoops finished the match with six teenagers on the pitch. Bradley gave first starts to 16-year-old Cory O’Sullivan and 17-year-old Justin Ferizaj (who also has made a handful of appearances off the bench for Rovers in recent weeks).

While Emakhu spent time with St. Francis, Lourdes Celtic, Crumlin United and Shelbourne’s underage section before joining Rovers, Bradley brought on subs on Friday that included 18-year-old players Michael Leddy and Sean Carey both of whom have been at the club since they were 14.

Leddy was part of the club’s First Division side in 2020 when he lined out ten times for Rovers II in 2020. 17-year-old Gideon Tettah also made his first competitive appearance for the Hoops first team off the bench on Friday.

Being able to bring these teenagers on when Rovers were leading in an FAI Cup game in Tallaght is different than playing them in a European game but Bradley felt confident enough to bring Ferizaj off the bench in the recent Champions League qualifiers.

After Friday’s game Bradley said: “A lot of them have trained with us quite regularly and Aidomo would have had that path before he broke in. A few of them are on that route. Justin and Gideon have been with us full time. You'll start to see them more over the next 12 months.

"Cory is a later one as he is 16, only a baby. I really like him but again we need to be very careful with rushing that.

“To be fair to Aidomo he hasn't had the run of starts to show his quality. He has had to be patient and learn his game. We are working on him heavily in training and after.

"You can see the potential that is there. In the final third, he is scored with his left foot on Tuesday and scored a nice little dink with his right tonight (and a header against Droghed).”

Emakhu admitted that after the FAI Cup substitutions “towards the end of the game I felt like one of the older lads! You can see the pathway is there. It's a very good club for academy players.

"The gaffer will give you a chance if he sees something in you. That's why the likes of Giddeon, Sean, Justin, Cory and Mikey are all up with the first team. If you get your chance, you have to take it.”

A memorable performance from the team last night ! A dream come through to score in the @ChampionsLeague  pic.twitter.com/xzZjxuYUgh

The striker certainly has taken his chances in the last week, particularly his late goal against Ludogorets which set up a grand stand finish in Tallaght.

“I have done what I'm supposed to do which is scoring goals and impacting the game. It's good to be finding confidence and form again after a bit of a drought. It's about kicking on from here and being ready to do it whether it's from the start of the game or the last tenminutes.

"You may not get it all of the time or get it when you want but it's that split second that you have to be there to finish it. We didn't get through but it was a big win and something we can pick up from and drive on for next week.”