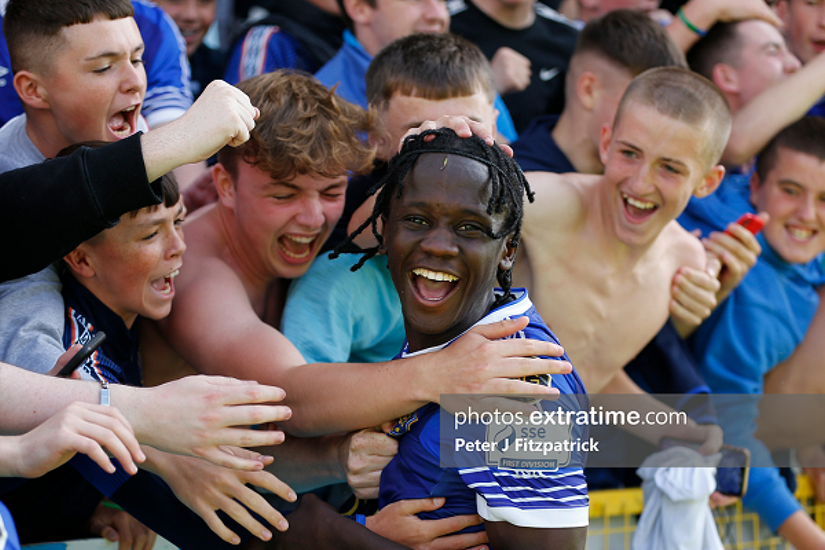 Waterford FC have beaten St Patrick’s Athletic 3-2 to progress to the last 16 of the FAI Cup. A double from striker Wassim Aouachria and one from Junior Quitirna were enough to end the current cup holders’ title defence.

The Saints possibly showed signs of a European hangover in this five-goal thriller in Richmond Park where all the goals were scored in the first 42 minutes.

The home side started the brightest with Ronan Coughlan and Joe Redmond both going close inside 10 minutes, the latter with a header that rebounded off the post.

We didn’t have to wait much longer for the opener, on 13 minutes the visitors struck first. It started with good play from Junior down the right he released Phoenix Patterson with a reverse pass who then crossed for Wassim Aouachria to slot home.

The lead wouldn't last long and five minutes later The Saints were level. Mark Doyle was brought down in the box as he attempted to shoot, the ref pointed to the spot and Coughlan – as he did on Thursday against Mura – calmly slotted home.

The home side then looked to be in charge. Barry Cotter crossed for Coughlan, but the striker shot narrowly wide after a good run to the front post. They didn’t have to wait much longer to take the lead as Tom Grivosti climbed highest at the back post to head in from a free-kick.

Tim Clancy’s side continued to look in control but on 33 minutes they handed Waterford an equaliser, a poor back pass from Serge Atakayi went straight to Aoucachira and the French striker made no mistake with the finish.

The game then swung in favour of the Blues as the dangerous Junior Quitirina put them in front. The forward played a one-two with Shane Griffin on the edge of the area and then curled an effort past Joe Anang in the Saints net on the 42nd minute

The introduction of Chris Forrester at half-time looked like it might get the Athletic back into the game.

On 52 minutes Billy King could have equalised after Forrester showed his quality with a run and cross but the Scot miss hit his attempt and Paul Martin gathered. Forrester then played an inch-perfect pass to set Cotter away, but the on-loan Shamrock Rovers man saw his shot blocked.

Just after the hour, Coughlan should have equalised, the ex-Sligo Rovers man got in front of his man to meet a Breslin cross but shot wide, then moments later he headed another Breslin cross off target.

King had another chance on the 75th minute, he linked well with Coughlan who played him through but blazed his effort over the bar.

There was a frantic energy to the game on the pitch and in the stands as the Saints pushed on for an equaliser. The best chance of the second half came in the 88th minute Redmond met a cross from the left, but his effort was saved by Martin, Mark Doyle blazed the resulting shot over the bar.

Waterford could have nicked a fourth goal late on, Roland Idowu made a surging run into the box but blazed his attempt over the St Patrick’s Athletic bar.

In the end, it wasn't needed as Danny Searle’s men hung on to knock out the Premier Division side. The Blues will be looking to go one better than their semi-final defeat to Bohemians last year.