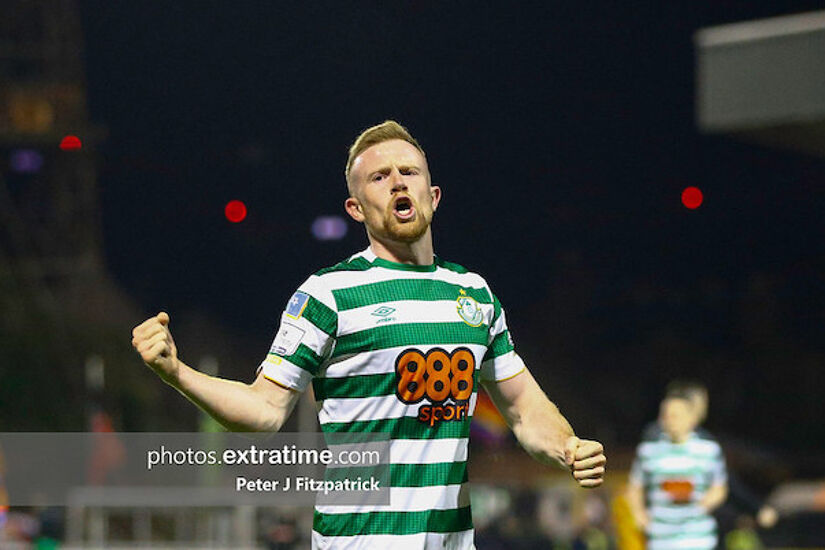 Shamrock Rovers will carry good momentum into next week’s Europa League qualifier as they eased into the second round of the FAI Cup with a 4-0 win over Bangor Celtic.

A first half goal from Rory Gaffney and second half strikes from Sean Hoare, Aidomo Emakhu and Daniel Cleary saw the Hoops progress by the Leinster Senior League side with ease.

In recent weeks Rovers have had some lengthy journeys with plenty of logistical challenges to overcome getting to cup games in the Champions League qualifiers. However there were no such issues for Hoops in the FAI Cup on Friday as they were ‘away’ to Bangor Celtic at Tallaght Stadium.

Stephen Bradley made nine changes from the team who beat Ludogorets 2-1 during the week and he handed out four debuts in his starting XI; Rovers’ two new signings Daniel Cleary and Simon Power came in, as did 16-year-old Cory O’Sullivan and 17-year-old Justin Ferizaj (who was making his first start having made recent appearances off the bench for Rovers).

Leon Pohls came in to play in goal as Alan Mannus was rested and Pohls had a quiet enough first appearance in the FAI Cup, although he needed to be attentive to Mark McCarthy’s long throw which was Bangor Celtic’s best weapon in the opening period.

At the other end of the pitch, the Hoops twice had the ball in the back of the net – through Gaffney and Neil Farrugia – only for the offside flag to go up. They also hit the crossbar twice – with Sean Hoare’s powerful header and an outstretched boot from Gaffney.

However, the Hoops striker wasn’t to be denied on 32 minutes. Gaffney ran onto Sean Gannon’s ball clipped up to him and this time the Rovers effort powerfully hit the crossbar and then the back of the net to give the Hoops a half time lead.

Dylan Watts, who was skippering the Rovers side, went close on a couple of occasions with shots from distance  but the ‘visitors’ could only carry a 1-0 lead into the half-time break.

It took till the 66th minute for the Hoops to double their lead. Gannon’s shot in the box was blocked and fell to Hoare whose low effort beat Hayden in the Bangor Celtic goal.

In the 74th minute Aidomo Emahku then raced in on goal to dink the ball by Hayden to score his third goal in three games in seven days.

Cleary then made it a scoring for a debut as he turned in the box to rifle home for the Hoops with his left boot eight minutes from time.