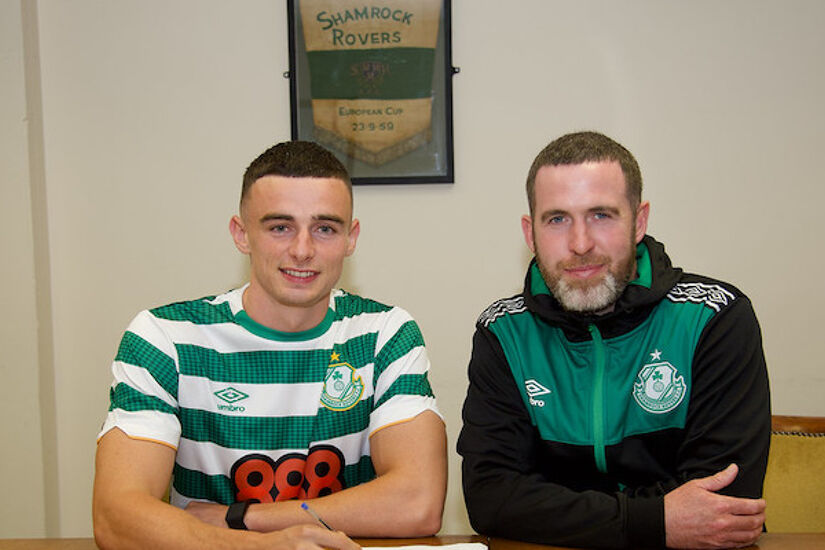 Shamrock Rovers have confirmed the signing of 24-year-old Simon Power. The Wicklow native has played the last two seasons in League Two with Harrogate Town but makes the switch back to League of Ireland having made his league debut with Cabinteely in 2015.

After moving to UCD for two seasons, he was signed by Norwich City in 2018 and during his time at Carrow Road, he had  four loan spells - Dordrecht in the Dutch second tier, Scottish Premiership side Ross County, and twice to National League North side Kings Lynn Town.

Hoops Head Coach Stephen Bradley said: “He's someone that we have been interested in for a long time. He’s got great strength and speed and can play all over midfield, centrally, on the right and left, and behind the front two, as well also defensively. He has a directness that will certainly add to the squad.

Power earned four under-21 caps during Stephen Kenny’s tenure as the boss of the Ireland underage team. In two seasons with the Harrowgate Town, he scored three goals in 34 competitive games.

“He had other options in England on the table,” said Bradley, “but after speaking with him we were able to convince him that this is the next step for him.”

The player will bring some added depth to their attacking department following the recent loss of Danny Mandriou to Lincoln City. With Pico Lopes out for the next two months (and Barry Cotter on loan with St. Pat’s), there is speculation that the Hoops will sign Dan Cleary who has left St. Johnstone. The defender previously spent time in Tallaght prior to signing for Dundalk.

Regarding new signings, Bradley said: “Although we have a busy period ahead, we don’t just bring in players for that reason. We always try to add the right players, players that improve the group and Simon definitely adds to us with his attributes."

On signing for the Hoops, Simon Power said: "It’s such a huge club and it is run very professionally. I had a meeting with the manager and with Stephen McPhail and they showed me around the training ground and the facilities are fantastic.

“I watched the European game (home to Ludogorets) and saw for myself the huge support in Tallaght Stadium and that has played a massive part in my decision to sign for Rovers.

“I grasped the opportunity to come home and play some European football as well as potentially get my hands on some silverware with Rovers.

“I’m a very attack-minded player. I’m a winger by trade, pacey and direct. I like to create chances and chip in with a goal or two. I’m a hard-working player who will always give 100%. Hopefully, I can get into the team as soon as possible and show the fans what I can do."