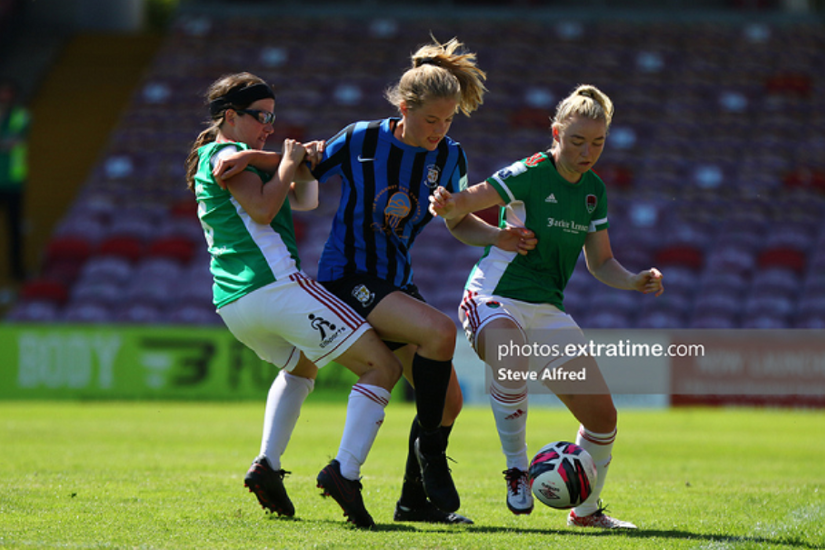 It was first against second in the Women’s National League at Tolka Park on Saturday afternoon as Shelbourne secured a 1-1 draw against Athlone Town to remain eight points clear at the top of the table.

Emily Corbett opened the scoring for Athlone Town in second half and they looked to be on to a winner only for the Reds to get a late winner courtesy of Noelle Murray.

Noel King made just one change to his side from their 4-0 win over Peamount United last weekend with Abbie Larkin starting in place of Jemma Quinn. Larkin earned her spot this week having come off the bench against Peas to score a hat-trick.

Athlone Town overcame Sligo Rovers last weekend with a late Scarlett Herran goal securing a 2-1 win for Tommy Hewitt’s side, they made just one change for the game against Shels with Fiona Owens starting and Muireann Devaney dropping to the bench.

The home side started the brightest with some play created as Keeva Keenan and Megan Smyth-Lynch linked up to cause trouble for Athlone Town in the opening exchanges. The closes they came was a header from a corner with goalkeeper Niamh Coombes able to deal with the danger.

Tommy Hewitt’s side possibly had the closest chance with Emily Corbett drawing a save from Amanda Budden at close range in the 11th minute after some great play by Roisin Molloy on the right wing.

Noelle Murray was extremely unlucky not to nudge the Reds in front minutes later when her long range effort clipped the woodwork just inside the post but the ball failed to cross the line despite trailing right across the goal mouth.

Keenan had a good chance on the edge of the box in the 25th minute for the home side, but her effort was fired too close to Coombes and the shot stopper clutched the ball into her chest.

A good ball from Leah Doyle cut through the defence on the half hour mark, the chance fell to Smyth-Lynch, but she could only get off a snapshot with the ball once again shot directly at Coombes and saved.

The home side were inches away from a goal on the stroke of half time after a period of extended pressure on the Athlone goal from a Noelle Murray free-kick, the ball was eventually cycled back out to Jessie Stapleton who took aim and fired from the edge of the box with her effort whizzing by the outside of the post.

Athlone Town came out in the second half and grabbed the lead after just four minutes, a long ball up the field unlocked Emily Corbett with the striker racing towards goal before striking a beautiful shot beyond the reach of Amanda Budden.

Shels nearly had the perfect response five minutes later when Abbie Larkin nicked the ball into Jemma Quinn, who was introduced at half-time, she lined up her shot at a tough angle, but her effort went just wide of the goal.

Noelle Murray followed up with a good header on the hour mark, but with her back to goal she couldn’t get the direction she wanted on the ball and again the home side sent the ball behind.

The Reds were not letting up and they went close again minutes later, this time Larkin flicked the ball back out to half-time substitute Aoife Kelly on the edge of the box, her strong effort drew a diving save out of Niamh Coombes to preserve Athlone’s lead.

Larkin had a shot herself in the 64th minute when a Noelle Murray corner-kick made it to the far side of the goal, Fiona Owens intervened to block the shot on the line with the Reds really piling the pressure on the Town.

The striking partnership between Emily Corbett and Madison Gibson was a danger throughout however, and they came close to doubling Athlone’s lead in the 68th minute when the pair broke towards goal, Shels’ defence failed to clear the ball and allowed Gibson a shot on goal with Budden only just making the save to deny the striker.

Niamh Coombes showed great bravery with 15 minutes to go, the Reds played Rachel Graham into the box and the goalkeeper managed to close the midfielder down and deny the home side an equaliser, although she required treatment immediately after having received contact from Graham’s boot when she fired off her shot.

There was one final twist late in this one, Jessica Hennessy was called for a handball in the Athlone box with referee Daryl Carolan pointing to the spot immediately. With four minutes gone in stoppage time it was Noelle Murray who stepped up to stroke the ball into the net to claim a huge result in this year’s WNL title race.