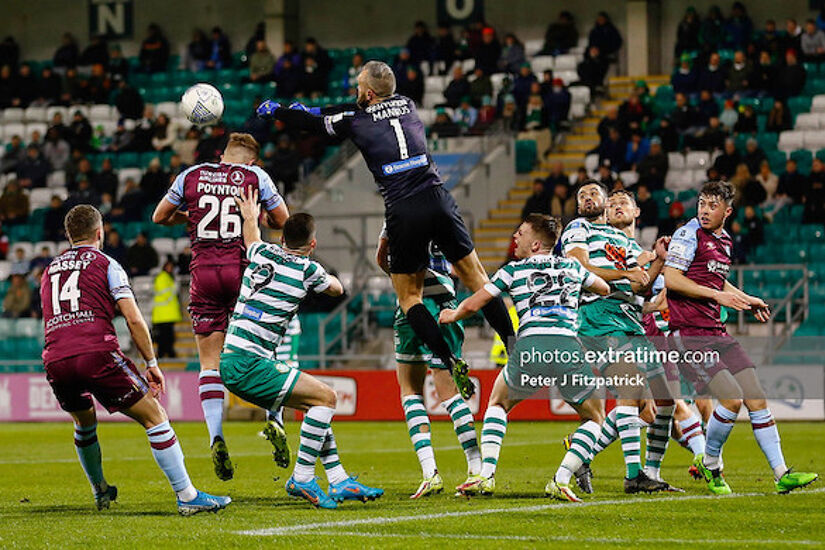 It is back to league action for the Hoops on Saturday afternoon after their disappointing 3-0 away defeat to Ludogorets during the week. Drogheda United are the visitors to Tallaght Stadium (kick off 2pm) for this game between the first and second legs of their Champions League second round qualifier against the Bulgarian champions.

“We felt that at 2-0, the tie was very much still alive in Tallaght but to concede the (injury time) goal in the manner that we conceded was really disappointing from our point of view,” said Hoops Head Coach Stephen Bradley reflecting on that mid-week defeat with shamrockrovers.ie.

“We knew the first half wasn’t anywhere near what we’re capable of. I know they were very good and you have to give them credit as well but we were off the pace and there’s a number of reasons for that.

Tuesday’s away defeat was the first time this season that Hoops have conceded three goals in a game but at home Rovers have won ten and drawn of their 11 games played – indeed they are undefeated in Tallaght Stadium since their Europa Conference League loss to Flora Tallinn last August (and have only lost once in the league at home since June 2019).

“We know this Drogheda game is just as important as the Ludogorets game. Everyone will be fully focused and be ready to go and win the game. We’ve said it a number of times, if you want to compete you’ve got to make sure that you come back from Europe and go and win your games, and that’s what we’ll be looking to do.”

Coming into Saturday’s the game, Rovers lead at the top of the table is down to six points with a game in hand on Dundalk (who beat Finn Harps 3-0 on Friday evening).

“We saw from their goal up there [a 1-0 defeat in May] that they attack the ball really well from crosses. Their wingers are direct and like to get crosses in the box, like we saw with the goal we conceded up there so we’ve got to make sure that we’re ready for that.”

The Hoops are set to play three home games across seven days with Tuesday European second leg to come before Friday’s ‘away’ FAI Cup clash against Bangor Celtic which has been switched to Tallaght Stdium.

The Boynesiders victory over Shamrock Rovers last time the sides met thanks to a Ryan Brennan goal was United’s first win over Rovers’ first team in competitive action since July 2018 when the Drogs dumped the Hoops out of the FAI Cup with a 1-0 home win.

While buoyed by that recent 1-0 league result, the Boynesiders travel to Tallaght on the back of a defeat in their last match – a superbly entertaining 1-0 defeat to Bohs at home last week.

Kevin Doherty will be able to call upon new signing Lee Steacy after the goalkeeper’s move from Longford Town during the week but Darragh Nugent is unavailable due to the terms of his loan deal from parent club Shamrock Rovers.

When the team played in Tallaght earlier in the season the Drogs went down to a 3-1 defeat. Sean Gannon and Jack Byrne scored for the Hoops before Evan Weir halved the deficit. Graham Burke sealed the three points ten minutes from time

July 2014 was the last time Drogheda won a Premier Division game in Tallaght. Gavan Holohan scored the only goal of that game.

Top scorer on seven league goals for Rovers is Graham Burke (who hasn’t started a game since May) and Danny Mandroiu (who left the club for Lincoln City this month). Dean Williams is Drogheda’s top scorer. The former Shamrock Rovers player has six goals to his name.

The Hoops are seeking their fourth league clean sheet in a row.