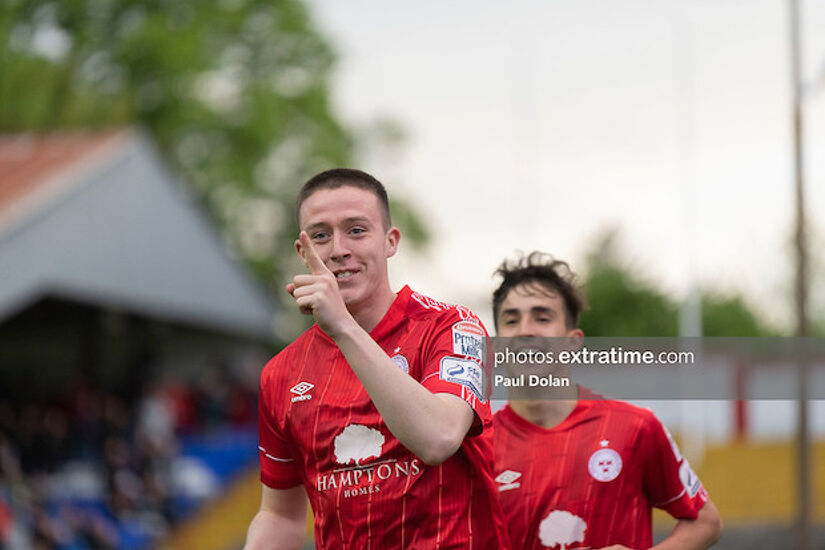 Shelbourne at the third time of asking this season got their first league win in this campaign over Finn Harps with a deserved 3-1 win in Tolka Park.

Gavin Molloy hadn’t got a Shels goal until this evening but his two first half efforts either side of an Ethan Boyle header gave the Reds a 2-1 lead at the break.

Jack Moylan scored the third to bring the Reds to within a point of sixth placed Bohs who sit above them in sixth place in the table.

Harps’ only wins this season had come against Shelbourne but they were second best in this encounter in Dublin. Those two victories are keeping Ollie Horgan’s men above basement side UCD but the Students sit just three points behind them in the table.

The opening opportunity of the game fell to the home team with Moylan hitting a low driven effort that just beat Gavin Mulreany’s right hand post.

The visitors looked to exploit Boyle’s long throw with the defender returning to the starting line up having missed the 1-0 home defeat to Shamrock Rovers the previous week.

The target man was Harps’ new Scottish signing from League One side Clyde Robert Jones who came straight into the Harps team for his debut.

However, it was from a Shelbourne set piece that the Reds took the lead from on 14 minutes. Robert Slevin headed the ball behind the Harps end line and Molloy rose highest to power home a header from Shane Farrell’s corner.

The lead only last five minutes though as Harps exploited their next set piece. Boyle, who had scored in Tolka Park in his team’s 3-0 win earlier in the season, got up to touch home with his head Regan Donelan’s left footed inswinging free kick.

Only for a brilliant Brendan Clarke save on 26 minutes, Harps would have taken the lead. The goalkeeper swept a hand up to tip over Harps skipper Barry McNamee’s volley after he ran onto Jones’ flick on.

Molloy grabbed his second on 38 minutes with a shot from distance that rounded off a sweeping move involving Kameron Ledwidge, Conor Kane and the lively Jak Hakiki. Mulreany then stood up to save Moylan’s shot when he cut through the Harps defence off a Kane pass.

In first half injury time, Boyd should have done better when Farrell’s corner came to the striker but the home supporters were happy enough with their team taking a half time lead with them into the break.

In the second half Farrell and Hakiki looked to exploit the space as Harps tried to conjure up the equaliser. Moylan’s shot went straight at Mulreany when he had the full goal to aim at after a Farrell pull back when he got down the end line.

The third goal came through excellent link up play between Boyd and Moylan.

The tall striker flicked on for Moylan who played a one-two back with Boyd before he slotted the ball by Mulreany which meant the Shelbourne supporters were very much enjoying themselves at the full time whistle.