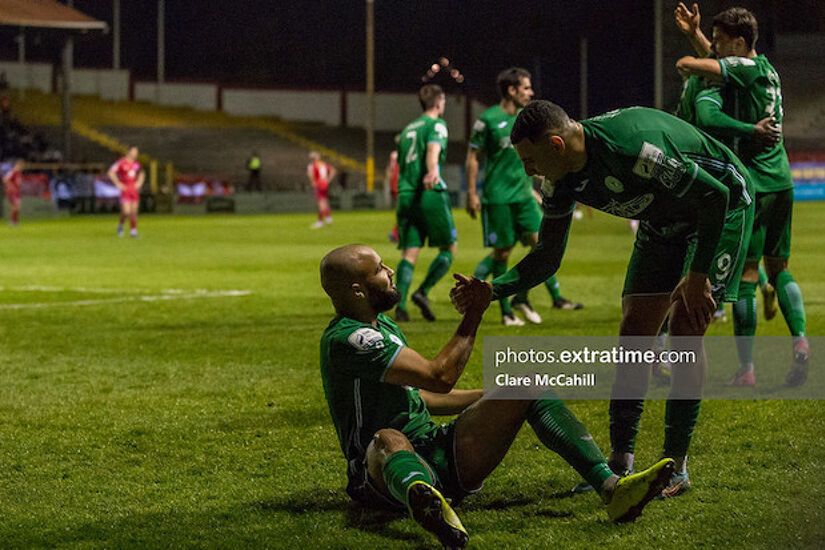 The Reds are looking for their first league win since May when they welcome Finn Harps to Tolka Park on Friday night (kick off 19:45).

Their last victory was a 2-0 home win over basement side UCD and since then they have drawn one and lost three times including last week’s 3-1 defeat in Sligo.

However despite the scoreline in the Showgrounds last week, manager Damien Duff was pleased with his side’s performance and is looking for something similar in terms of creativity against an Ollie Horgan led Harps side who have twice beaten the Reds this season.

“Not many teams go to Sligo and dominate, create as many chances as we did while pinning them back but between that, the game in Dalymount (1-0 defeat) and a good draw against Dundalk (in Tolka) we’re looking to turn those into wins,” Duffer said when speaking about the game with shelbournefc.ie.

“Training has been good this week and despite results being semi-disappointing, I feel the lads are in good form and we’re looking forward to tomorrow.

“I hope we can deliver for the fans tomorrow – a performance and the three points,” said Duff who will want to keep pace with Bohs whose win in UCD on Thursday night pushed them four points ahead of the Reds directly above them in the table.

“Listen Ollie (Horgan) will come down here believing they can win, and rightly so, but we have to stand tall to that.”

Duffer will be able to call on form Harps player Mark Coyle who is back in the match day squad after his recent injury but both Daniel Hawkins and Sean McSweeney are out through injury.

Harps have won just the two games this season but both have been against Shelbourne. A third win would move Ollie Horgan’s side six points clear of basemetn side UCD who lost to Bohemians at home on Thursday night.

“Our head to head record means nothing tomorrow night,” was Horgan’s assessment when he spoke with FinnHarps.ie. “A look at the table is all you need to see the task ahead of us.

“Shelbourne have quite a few big wins already this season and were probably unlucky in the Showgrounds last time out to come away with nothing. They’ve hit their stride while we’re still looking to put together some consistency and more importantly points on the board.”

Last week at home Harps put in a big defensive shift against Shamrock Rovers. Level  at 45 minutes, they conceded a first half injury time goal and while they kept the Hoops at bay in the second period they couldn’t find an equaliser.

“I felt we did well against Rovers last week but moral victories are no good to us if we want to stay in the division.

“Our away support this season has been tremendous and we’ll need them again to give us a boost if things aren’t going our way at Tolka Park.”

Ethan Boyle, who scored the late equaliser against St. Patrick’s Athletic in June, missed the game against Rovers due to suspension but he makes a return on Friday. He got the opener in Harps’ 3-0 win in Tolka back in March.

Sean Boyd is Shelbourne’s top goalscorer so far this season with six strikes against his name.

A First Division clash back in June 2015 was the last time Shelbourne beat Harps at home. Philly Hughes got a 17 minute hat-trick for the Reds in the 3-2 win.