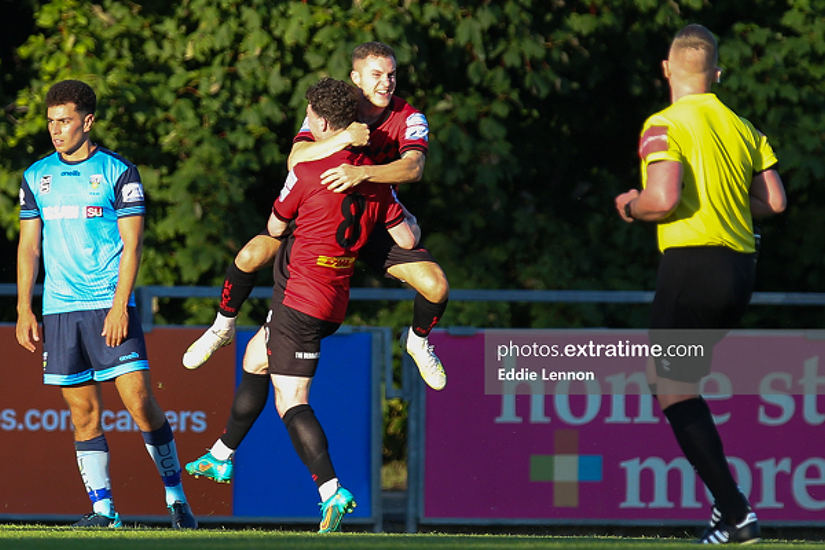 Bohemians celebrate a goal during their 3-1 win over UCD on Thursday, 7 July 2022. Credit: Eddie Lennon (ETPhotos)

After a superb goal from Thomas Longergan put UCD a goal up, strikes from Jordan Flores, Liam Burt and a late penalty from Dawson Devoy ensured Bohemians avoided another banana skin at the UCD Bowl as they emerged 3-1 winners over the Students on Thursday night.

Bohs dominated the opening exchanges with Devoy proving particularly influential in the number ten position but a piece of divine intervention from towering UCD centre half Sam Todd set the tone for the students to burst into life.

First, he threw his body on the line to deny Promise Omochere a certain goal before he almost broke the deadlock from a corner at the other end.

Todd's presence sparked panic in the Gypsies rear-guard and after a combination of Tadgh Ryan and some desperate defending the Belfield side deservedly opened the scoring, and how.

Dara Keane drove through the heart of the Bohemians midfield before slipping in Thomas Longergan who swatted Jordan Doherty aside and curled a peach of an effort past the despairing Ryan after half an hour.

UCD boss Andy Myler was serving a touchline ban and he will have entered the half time changing room pleased with the performance but bewildered at how the hosts found themselves a goal down.

A long-range Jordan Flores strike levelled affairs seven minutes later after some poor goalkeeping from Kian Moore and there was more good fortune for Keith Long’s charges just before the whistle after Ali Coote’s volley bounced into the ground and found the head of Liam Burt who nodded home.

Junior Ogedi-Uzokwe replaced Omochere at the interval and he almost had an instant impact. Tyreke Wilson’s deep cross was misjudged by Moore but Junior was unable to get any power on the header and Todd was on hand to hack away.

The second half was scrappy in comparison to the rip-roaring first half but burst into life for the last ten minutes after Todd was given a straight red by referee Alan Patchell for a rash challenge on Flores where he came over the top of the ball.

UCD briefly found a second wind with substitute Sean Brennan testing Ryan from distance, but it was all in vain as Bohemians saw the game out.

Keith Long introduced new signings to Declan McDaid, John O’Sullivan and Ryan Burke for their debuts but it was Mr Reliable Dawson Devoy who made sure of the points from the spot and ensured the visitors avoided any late hiccups that have plagued their season to date.

UCD will wonder how they let this game slip from their grasp as their survival hopes went from realistic to potentially being cut adrift depending on how Finn Harps fare at Tolka Park tomorrow night.