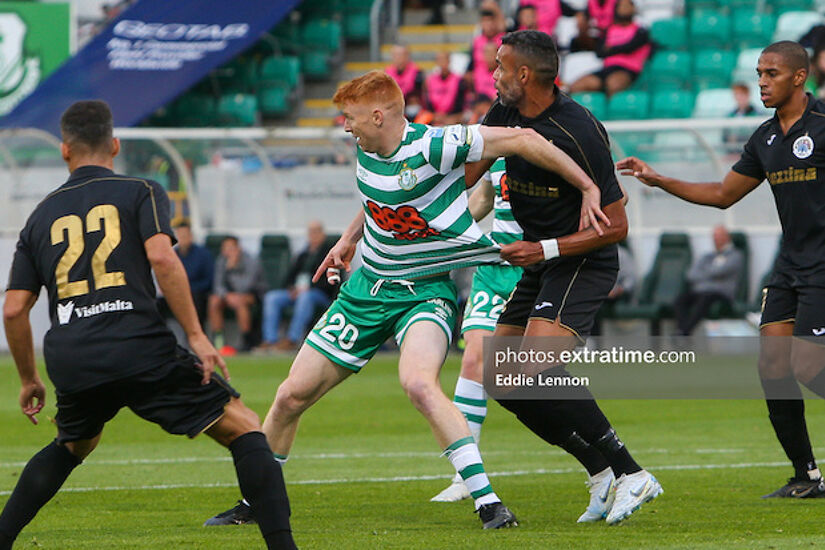 Rory Gaffney battling it out against the Hibernians defence in Shamrock Rovers' 3-0 Champions League first qualifying round first leg win in Tallaght over the Maltese champions Credit: Eddie Lennon (ETPhotos)

Shamrock Rovers put themselves in a commanding position to make it through to the second qualifying round of Champions League on Tuesday night after their 3-0 home first leg win over Hibernians of Malta.

The Hoops play the second leg next Tuesday 12th July in the Centenary Stadium in Ta’Qali adjacent to the Maltese National Stadium with a 8pm kick-off time locally (7pm Tallaght time).

extratime.com has taken a look at their potential route to the group stages of one of UEFA’s competition and the prize money that they could earn.

Let’s start with the disaster result for Rovers – a loss to Hibernians by three goals and a penalty shootout elimination (remember away goals are no more) or a defeat by four goals or more and the Hoops will drop into the second qualifying round of the UEFA Europa Conference League. There they will play Levadia Tallinn (on 21st and 28th July) in the second qualifier round.

If the Hoops lose that tie they will be out of Europe receiving a cheque from UEFA for €810,000 (€100k for each round played {i.e. €200k}, €260k as a domestic champions not making the group stages and €350k for elimination at Europa Conference League in the second round qualifying stage).

If they win that UEFA Europa Conference League (UECL) qualifier against Levadia Tallinn then they enter the third qualifying round (4th and 11th August); lose that third round qualifier they will exit Europe banking €1.11m (€100k for each round played {i.e. €300k}, €260k as a domestic champions not making the group stages and €550k for elimination at the UECL in the third round).

The expectation is that the Hoops with a 3-0 first leg lead will progress by Hibernians to the Champions League second round of qualifiers.

Defeating the Maltese Champions will guarantee the Hoops another three ties - win one of those ties and they’d make the Europa Conference League group stages worth a minimum of €3.3m.

Eliminating Hibernians means Rovers would play either Ludogorets (Bulgaria) or Sutjeska (Montenegro) in the Champions League second qualifying round. The Bulgarian champions for the last 11 seasons won the first leg at home 2-0 on Tuesday evening.

Losers of the Champions League third round qualifiers enter the EL play-off. Lose that EL play-off and Shamrock Rovers would drop directly into UEFCL group stages (worth a minimum €3.3m).

With the World Cup in Qatar kicking off on 21 November, the group stages of the Champions League, Europa League and Europa Conference League are squeezed into six match nights between the first week of September and first week of November.