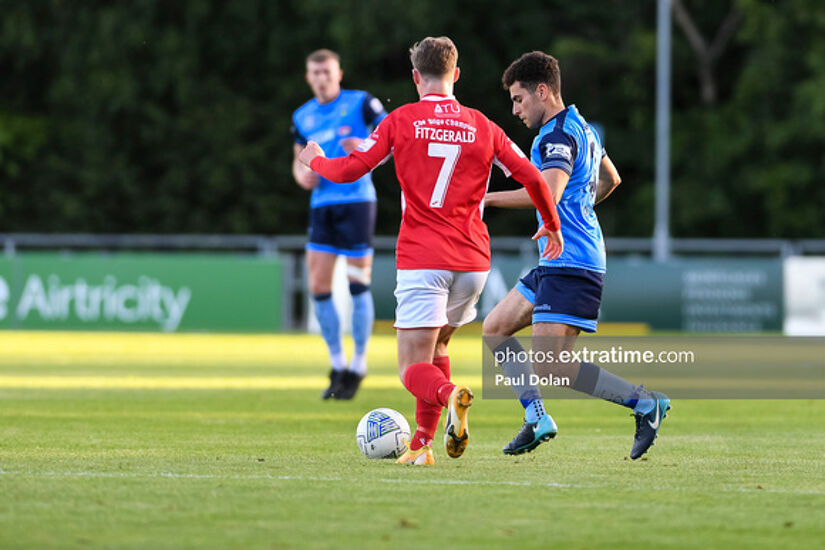 Will Fitzgerald was a key player in Sligo's win over Shelbourne Credit: Paul Dolan (ETPhotos)

Sligo Rovers defeated Shelbourne by three goals to one in their Showgrounds clash on Saturday night courtesy of an Aidan Keena double and a Max Mata strike. Brian McManus’s early deflected strike for the Tolka Park outfit turned out to be a mere consolation on the evening.

John Russell made a single change to his starting eleven following a goalless draw in Head in the Game Park last Friday- Lewis Banks dropping out to be replaced by Nando Pijnaker. New signing Frank Liivak made the bench along with goalkeeper Luke McNicholas- following the end of the latter’s loan spell with Cliftonville.

For Shelbourne, they too had a goalless encounter last week, as they held Dundalk at Tolka Park. Damien Duff made two changes to his starting lineup with Sean Boyd and Jad Hakiki losing out to John Ross Wilson and Gavin Molloy- who was making his first league start for the Reds.

The visitors got off to the perfect start as midfielder Brian McManus, who signed a new contract during the week, found the net on five minutes. Having been found by JJ Lunney on the edge of the box, his crisp low shot appeared to take a nick off a Sligo defender before finding its way past Ed McGinty to open the scoring.

The Bit O’ Red were level halfway through the opening period as Aidan Keena found Will Fiitzgerald in space in the middle of the park. The Limerickman surged forward and picked out Max Mata on the corner of the Shels box. A step inside the covering defender and a sidefooted finish beyond Brendan Clarke saw the game tied at one goal apiece.

New Zealander Mata was also involved in the second Sligo goal as some wonderful interplay between himself and Keena down the left channel ended up with the ball at the feet of Keena who clipped it cooly over Clarke for his tenth league goal of the season and saw the home side take a half time lead.

The second half saw Shelbourne almost find the equaliser twice-  substitute Sean Boyd with an effort saved by McGinty before a goal line clearance denied the visitors once more. Indeed, they actually had the ball in the net on two occasions in the last ten minutes but the attempts, of Hakiki and Moylan respectively, were ruled out for offside.

Following their reprieves, Sligo put the game beyond doubt in additional time at the end of the second half. Estonian international Liivak, making his debut as a substitute for Karl O’Sullivan, provided a lively cameo and he found Will Fitzgerald in the area. The winger was fouled by Clarke and Keena dispatched the penalty beyond the keeper to seal all three points for the home side and record their third win in a row at the Showgrounds.