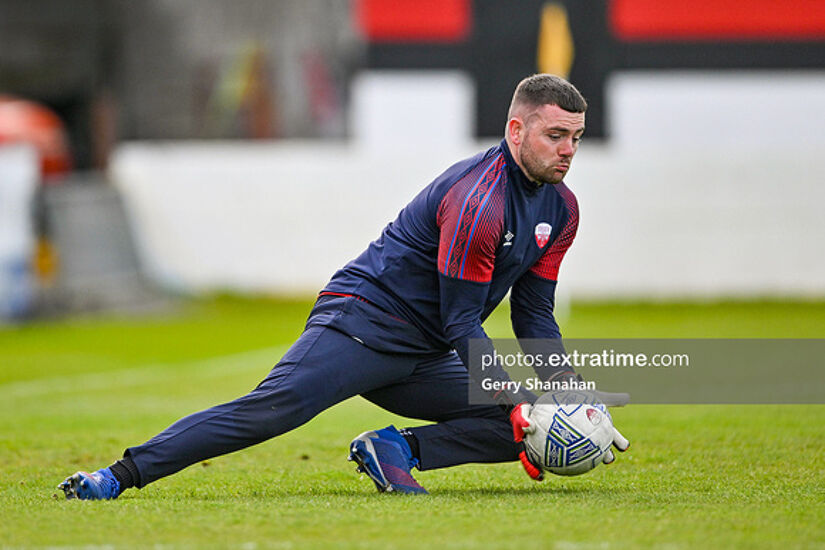 Jack Brady was back in the Treaty nets and he kept a clean sheet versus Cobh Credit: Gerry Shanahan (ETPhotos)

It was no change at the top of the First Division table on Friday night as the top two stretched their lead at the summit while Wexford FC kept up their great recent run to remain unbeaten after five games- their best run since the latter end of the 2015 season under Shane Keegan.

The other game in the division saw the Laois man suffer defeat in his maiden outing as Cobh Ramblers manager, at home to his previous employers- as Academy Head- Treaty United.

Our roundup begins at the Carlisle Grounds where first half goals from Cian Murphy and Jonas Hakkinen propelled Cork City into a strong lead at the interval. Freescoring teenager Darragh Lynch netted his sixth Bray goal in his last six games- three of which he started as a sub- to make things interesting before Ruairi Keating put the game beyond doubt with Cork’s third goal and twenty minutes left on the clock.

The Leesiders’ rivals at the top of the table, Galway United, faced third place Waterford at Eamon Deacy Park. John Caulfield’s men had taken a single point from their previous two fixtures- a two nil reverse at the hands of Longford Town following a goalless encounter with Treaty United. On Friday night they got the three points they needed courtesy of a Killian Brouder header. The centre half nodded Dave Hurley’s corner kick beyond Brian Murphy for his third goal of the season and Conor Kearns kept his tenth clean sheet of the campaign to ensure that the home supporters went home happy in the knowledge that their quest for promotion was back on track.

At Ferrycarrig Park, Ian Ryan’s Wexford are now firmly in the hunt for a Play Off place as they saw off Athlone Town by three goals to one to maintain their five game unbeaten run. Despite losing the talismanic Jack Doherty to injury early on, they took a lead into the interval, courtesy of a composed Aaron Dobbs finish. A spectacular strike from distance courtesy of Youri Habing saw the Midlanders level the scoreline before late strikes from Conor Davis (penalty) and Dinny Corcoran ensured that the Slaneysiders remained in fifth place- three points ahead of Treaty United having played a game more than the Limerick outfit.

Treaty were in action themselves as they saw off the challenge of Cobh Ramblers at St Colman’s Park. The Cork outfit had replaced Darren Murphy with Shane Keegan during the week, however the change wasn’t enough to take all three points on this occasion. Tommy Barrett made four changes to the starting lineup following their defeat to Cork City including the return of Jack Brady between the sticks and ex Rambler Martin Coughlan making his first start for the Limerickmen. An own goal from defensive stalwart Ben O’Riordan and a second half strike courtesy of supersub Willie Armshaw were enough for the Shannonsiders as they look to chase down the aforementioned Wexford in that coveted fifth position.