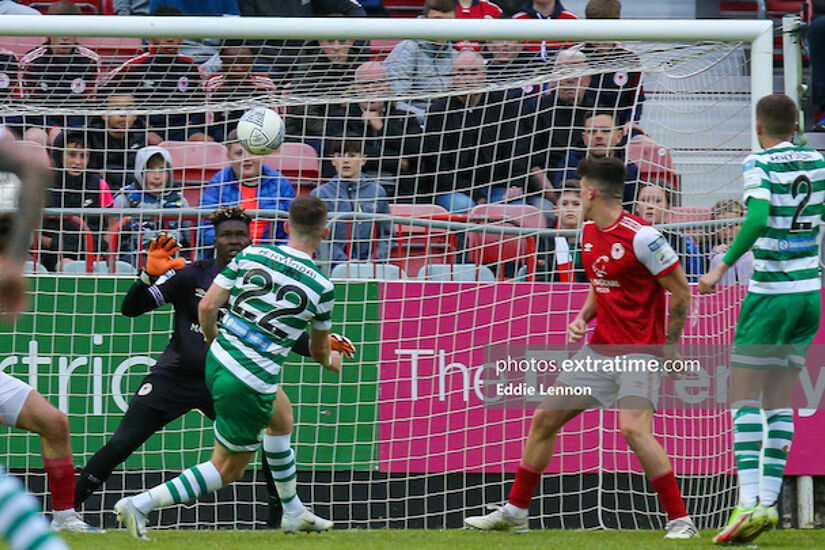 Shamrock Rovers extended their lead at the top of the Premier Division table to ten points after a convincing 2-1 win over St. Patrick’s Athletic in Richmond Park on Monday night.

Second-half goals from Andy Lyons and Aaron Greene proved the difference with a late Eoin Doyle penalty not enough for Pats to make it back-to-back 2-2 draws.

The game started brightly with both sides playing at a high tempo. The first real chance of the game fell to the home side; a good pass by captain Chris Forrester allowed Billy King to turn in the box but the Scot blazed over.

Moments later Forrester was nearly involved in Rovers scoring. He lost possession on the edge of his own area, but Dylan Watts' resulting shot was tipped behind for a corner.

Rovers began to take more control of the game and in the 20th minute their captain Roberto Lopez went close. The Cape Verde international was first to a Watts cross and with an audacious flick sent the ball goalwards, but Joseph Anang denied what would have been a goal of the season contender.

The game hit a bit of lull after that but the Saints wide-man Darragh Burns always looked a danger. The 19-year-old was linked during the week with a possible move to Rovers and he put in a dangerous cross in the 33rd minute but it evaded all his teammates.

Both sides finished the half strongly and either could have been ahead. Billy King drove forward with the ball before releasing Eoin Doyle, but it looked like the striker had taken one too many touches and the resulting shot was easily gathered by Alan Mannus.

The Hoops then had an opportunity to go in front. Nice interplay down the left between Lyons and Greene saw the latter cross dangerously but nobody could get on the end to finish the move.

The Athletic started the second half the brightest. Burns again providing the creative spark for Eoin Doyle but his header was off target.

Lyons was then to be denied for the Hoops on the 57th minute. An excellent last-ditch tackle from Jack Scott was enough to stop the ex-Bohemians man who was through on goal.

The deadlock was finally broken in the 61st minute, and it was Lyons who got the goal. After some great play by Rory Gaffney, he passed to Greene who hit a low ball across the Pat’s box and the oncoming Lyons made no mistake smashing the ball past Anang.

The lead was doubled 10 minutes later, and Greene, who was the provider for the first did everything himself for the second. He beat Scott from down the right before then beating Joe Redmond and smashing the ball home for the Hoops from a tight angle.

While Rovers were on top for the majority of the second half Pats really should have had one back in the 83rd minute if not for a big miss from substitute Tunde Owolabi. The forward initially did well as he rounded Mannus but Lee Grace somehow got back to block the shot off the line.

Owolabi then went some way to redeem himself by winning a penalty in stoppage time. He beat a couple of Rovers defenders with lightning pace before being brought in the area. Eoin Doyle converted the spot-kick but the champions held on for the three points.