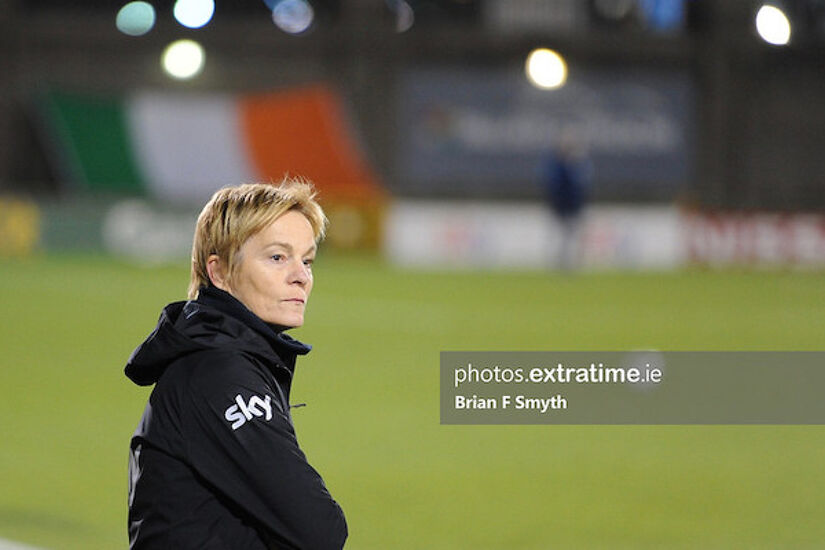 Monday’s match with Georgia is another stepping stone to what Vera Pauw hopes will be a place in the 2023 FIFA Women’s World Cup.

On the eve of the game, the Republic of Ireland manager spoke about the challenge ahead for her team with the prize for Ireland of getting to the World Cup very much in their own hands – beat Georgia and the Finland in the game to come in September and a play-off position will be secured for the Girls in Green.

It is clear that all the required resources have been made available to Ireland for this task. They hada two week camp in Turkey in preparation for the one game in this international window – against a team they beat 11-0 last time out in Tallaght.

They have had to balance the varied fitness of players in the squad, some who are in season and others out of season. A chartered flight brought the team on Saturday from Turkey to Tbilisi.

When Pauw came into the job, she organised friendly matches against higher ranked opposition to help in their preparation. And while results didn’t initially go Ireland’s way – losing seven games in a row – they have six wins and two draws from their last ten games which have moved them to their highest ever ranking of 27th.

Last time out was the 1-1 draw in Sweden against the world number two side.

In the last campaign, Ireland suffered a heart breaking defeat in Kiev with Ukraine stopping Ireland from making it to the upcoming Euros in England. The pressure is back on Ireland again as they come into the climax of this qualifying campaign but Pauw believes her team are in a much stronger position than last time out.

“We always want to grow higher and that is why we have played more games against higher ranked teams,” said Pauw. “We have the pressure of having to win. The away game in Ukraine was the biggest frustration.

“I have had that with all the squads that I've brought to the top. It is probably part of the process and we are much further in our development than when we played Ukraine.”

She said that the two week training camp has been a “luxury” and while focussed on the Georgia game “hopefully it will benefit our preparations for Finland”. Fitness, tactical work and some down time all fed into their time in Turkey.

“The good thing is the players could get rhythm. On the other hand you need to be careful of not using every minute as that wouldn't help the learning process. You need to settle also in the brain.

“Physically you need to be able to train 100% and if you are tired you cannot do that. So we had a recovery day, an off day and the day before yesterday (Friday) was a recovery day. That is part of the process of being together for so long and being able to go through so many subjects with them focussing on making the play.

“We have a big challenge; first this game (against Georgia), we have to win this game and then the next game is ahead of us (against Finland). My greater concern is rhythm. Have we got rhythm in our play to beat Georgia?”

Diane Caldwell: ‘The collection of players we have now is the best we have ever had’ https://t.co/Eok9xhWWgQ pic.twitter.com/Dr0zW3AV6J

Ireland come into Monday’s qualifier with no injury concerns. “That is a huge compliment to my full staff,” she said. “The players all came in with different fitness levels and we have worked day in and day out with individual periodisation and it worked really well.

“We had two weeks, normally you take six weeks. The players responded really well and the data was above expectation. For each player you see what they have done, where they are in their preparation and you connect the load of the training session to that.

“They all wear heart rate monitors and our sports scientist Niamh McDaid is putting every session into diagrams so I can see how they recover from explosive actions. The whole programme has been to build up the core stability, building up resilience for duels that should take us through the game.”

The team chosen for the 1-0 friendly win last week against the Philippines along with the substitutes brought on were all based on minutes of game time required by the players. And for those who need additional time, a mini-game took place after the 90 minutes.

“We called the Philippines team and asked did they want a scrimmage straight after the game for the players who didn't have enough load. We played straight after the international game on the same pitch 9 v 9 with the goals on the 18 yard box.”

Courtney Brosnan: ‘When everyone starts playing football they dream about being able to play in a World Cup’ https://t.co/CsqsJE23Dt pic.twitter.com/zrZaF9zxoo

The Dutch coach confirmed that Courtney Brosnan will continue in goal and Pauw will settle on her team selection after the team’s final training session. That session won’t take place in the match venue in Gori as the team want to avoid the heavy rain and thunderstorms forecast for later today – and it avoids the 2.5 hour round trip from Tbilisi to Gori.

Having thumped Georgia 11-0 in Tallaght, how will Ireland deal with a team who are expected to line out with a low block as they try to avoid their seventh defeat in a row in this current campaign?

“The key thing is that you don't get into a game where we get frustrated and we don't really penetrate so that is what we have been training to avoid. It is not so much scoring early but keep on pressing both defensively and in attack.”