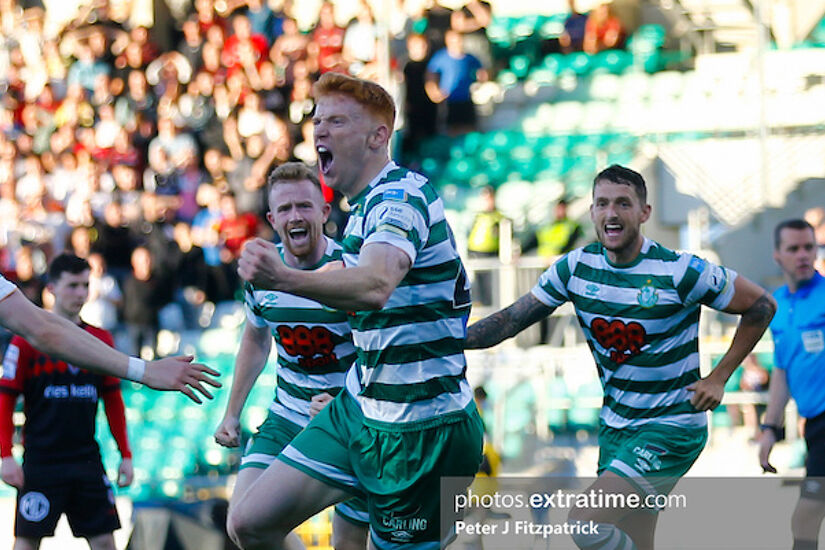 Rory Gaffney celebrating his winning goal against Bohemians - the second time he has managed that feat at Tallaght Stadium this season Credit: Peter Fitzpatrick (ETPhotos)

Rory Gaffney’s goal straight after the half-time restart was enough to give Shamrock Rovers all three points in the Dublin Derby as they overcame Bohemians 1-0 at a sun-drenched Tallaght Stadium.

An expectant crowd of 7,445 packed in for this latest instalment of these two great rivals but Gaffney’s goal seconds after the second half kicked off extended the champions lead to seven points at the top of the Premier Division.

The forward was on hand to turn home the ball from close range having been superbly denied by Tadgh Ryan moments earlier.

The champions entered the game without the influence of talismanic figure Jack Byrne, Richie Towell was out with a knock and Graham Burke was only on the bench.

Despite a goalless first half, the opening 45 minutes wasn’t short of drama. It took just eight minutes for the game to have its first controversial moment when Sean Kavanagh hauled down Promise Omochere to stop a Bohs counter.

There were massive calls from those in red and black for referee Rob Harvey to show a red card for stopping Omochere going through on goal but with the foul taking place just inside the Rovers half, a yellow card was a fair decision although Keith Long was livid on the touchline.

Rovers weren’t at their best in the first half and relied heavily on Danny Mandroiu for inspiration. The midfielder stung the palms of Ryan who produced a fine performance in the absence of James Talbot with a free kick before fizzing a venomous dipping effort over the bar from distance.

Liam Burt was equally as impressive for the visitors as the Gypsies looked to spring a surprise on the counter-attack and he will feel he should have done better with his two efforts, particularly after skying a shot over the bar from just inside the area.

Jordan Flores vs Andy Lyons proved to be an intriguing battle with Lyons becoming more prominent as the half went on and he should have had the assist for the opening goal only for Aaron Greene to somehow head wide from eight yards out.

Flores who has history of scoring on this ground, playing out of position provided a great attacking outlet for Bohs with numerous dangerous crosses.

The second half was barely a minute old when Gaffney opened the scoring and sent the south stand into raptures as he bundled home from a Mandroiu corner having been denied sensationally by Ryan seconds earlier.

Sean Hoare can count himself very unlucky not to have doubled Rovers’ advantage as his bullet header was headed off the line by Bohs skipper Conor Levingston.

Mandroiu almost put the game to bed on the hour but his deft header clipped the crossbar and stayed out.

Jordan Doherty had to be alert to divert Lee Grace’s goalnound header off the line to keep. his side in the game with eight to play.

Bohs were short on ideas for the entirety of the second half and didn’t land a punch late on as Rovers held on for their third successive won over their rivals.