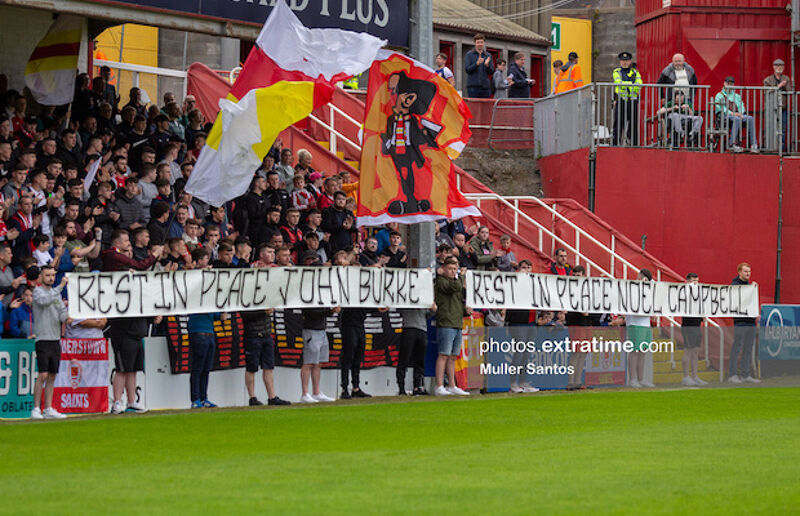 A second half double from Eoin Doyle ensured St Patrick’s Athletic came away with maximum points on their return from the mid-season break after they beat UCD 2-1 in Inchicore.

On a night where UCD had manager Andy Myler and assistant Willie O’Connor sent off early in the second half, the big moments undoubtedly went against the Belfield side.

Substitute Alex Nolan pulled one back for the Students to force a grandstand finish in Richmond Park but the Athletic prevailed on the night.

The Saints struggled to find their rhythm for much of the opening half despite their dominance and it was UCD who should have headed into the half time interval a goal to the good.

After a flowing counterattack Donal Higgins fired a shot across goal but Joseph Anang was equal to it before Sean Brennan struck his rebound into the ground and into the grateful arms of the West Ham loanee.

Tim Clancy’s side were lacklustre for long periods but a purple patch forced a series of half chances with both Doyles at the heart of everything good.

First, Eoin was denied smartly by Kian Moore after Sam Todd misjudged a long ball before Mark made a darting run across the box to meet Darragh Burns’ corner but Moore was well placed to tip over the bar.

From the resulting corner kick Tom Grivosti inexplicably turned the ball wide when it looked easier to score. After some pinball in the UCD area the centre back could only prod the ball the wrong side of the post from point blank range.

Andy Myler’s charges who named under-21 international Liam Kerrigan on the bench were forced to rue that missed chance before the break as Doyle broke the deadlock five minutes after the restart.

A beautiful reverse chip from Chris Forrester was met by the former Bolton Wanderers man and his header had just enough pace to beat the despairing Moore who couldn’t get across in time.

Referee Ben Connolly rubbed salt into the wounds when he awarded Sam Curtis a yellow card when perhaps he deserved a red after he clipped Dara Keane who was baring down on goal.

Myler and his assistant O’Connor were then banished to the stands for their protests.

Things got worse for UCD as the Saints doubled their advantage from the spot after Evan Caffrey was deemed to have nudged substitute Ben McCormack to the floor.

Eoin Doyle made no mistake from 12 yards and got his second of the game.

UCD were bright after that and introduced Ireland under-21 star Kerrigan from the bench and he played a gorgeous through ball into the path of Nolan who finished neatly in the far corner in the 87th minute to give the basement club a lifeline.