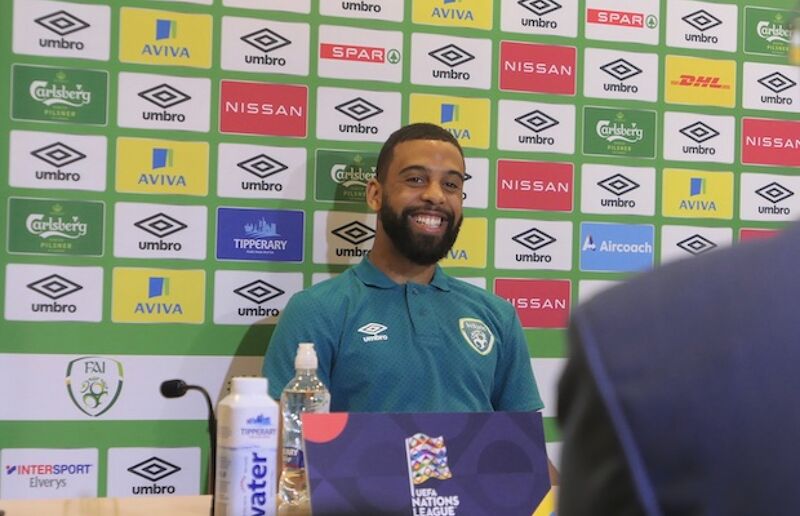 The Republic of Ireland’s new call up CJ Hamilton called it a crazy experience that he is on the cusp of a cap at international level.

The 27-year-old player who grew up in Waterford – playing gaelic games with Clonea-Power and later football with Carrick United - before moving to the UK in his teens, only recently came to the attention of Stephen Kenny after the Ireland gaffer learned of his eligibility to play for Ireland

“It is a crazy experience for me,” said Hamilton about his call up when he spoke to media on Bank Holiday Monday in Dublin. “I was only getting asked about being Irish just last March when the last training camp was on so to be here now is a crazy experience. It shows how far I have come.

“As soon as they found out I was Irish they were quick to sort it out and based on my performances I got a called up.”

His performances on the wing with Blackpool in League One – five goals from 22 league appearances - have earned him his first call up for his country but he is thankful for a number of people who encouraged him and made the FAI aware of his desire to play for the boys in green.

They include Noel and Stephen Hunt who lived local to Hamilton in Waterford, his former manager at Mansfield Town Graham Coughlan and his current teammate at Blackpool Richard Keogh.

“I moved over to England with my Dad when I was 16 or 17. I never really put myself out there (for Ireland) as I never thought I'd play football when I first left. When I started into football, I went under the radar as I was playing at a level where I never thought I'd be ever called up. Now I'm at a stage where I've been doing well.”

Having begun his career on the books with Sheffield United, Hamilton went on loan to first Halifax Town and then Gateshead – both in the National League – before making the move to Mansfield in League Two.

There he was managed by Dubliner Graham Coughlan. “We would have a bit of banter about Irish sports so I think he had a big part to play (in raising awareness of his eligibility).

“I loved the journey. When I went to England that was hard as there is so many boys in the same position as you. It is always about having a good attitude and working hard. I will always work hard and that has got to me where I am today.

“I've come on leaps and bounds from when I first joined (Blackpool in 2020). I feel I was a late starter. I didn't sign as a pro till I was 19. I am getting better as I get older.”