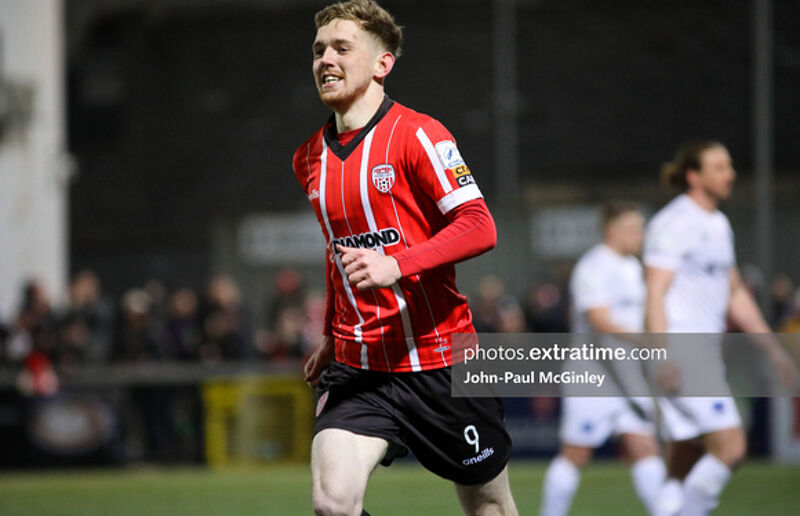 Jamie McGonigle was on target for Derry City in their 2-1 defeat to Sligo Rovers Credit: John-Paul McGinley (ETPhotos)

Donal Ryan reporting from the Showgrounds

A last-gasp stunner from Seamas Keogh was the difference as Sligo Rovers ran out as 2-1 winners over Derry City in an enthralling game the Showgrounds on Monday night.

The former Southampton man popped up with a deserved winner for the Sligo, following a turbulent couple of days in the wake of manager Liam Buckley’s departure.

The home side made two changes from their last match, as did the visitors. David Cawley and Robbie McCourt dropped out in place of Adam McDonnell and Paddy Kirk for the Bit O’Red, while Daniel Lafferty and James Akintunde came in for Matty Smith and Brandon Kavanagh for the Candystripes.

Both sides started brightly, with Ronan Boyce flashing a header wide from a Will Patching free kick in the fifth minute, following a sustained spell of Sligo Rovers pressure.

Five minutes later, Jamie McGonigle found Akintunde, but his flick was too tame to trouble Ed McGinty in the Rovers goal.

But the Bit O’Red took the lead in the 19th minute. Aidan Keena carried the ball forward excellently and his strike from range took a deflection to go out for a corner. McDonnell swung the ball into the box from the right and Garry Buckley was on hand to bundle the ball home at the back post.

Derry could have equalised in the 24th minute, as Joe Thomson and Patching broke on a counter-attack from a Sligo corner. Patching was in space in the box but Thomson opted to try and round McGinty, but he was thwarted by the young goalkeeper.

McDonnell had a great chance to double the lead after some excellent one-touch play from Rovers in the 32nd minute, but he dragged his shot just wide from outside the box.

Derry’s search for an equaliser before half-time continued, and they were rewarded somewhat fortunately in the 44th minute. Buckley’s clearance inside his own box smashed off his team-mate Colm Horgan, and McGonigle was alert to tuck a first-time finish into the bottom left corner, and the sides went in level at the break.

Both sides played out an even start to the second half, but Rovers nearly took the lead on the hour mark, as Karl O’Sullivan almost found Keena in the box, but the Mullingar man couldn’t stretch far enough to get his head on the cross.

It was Sligo who were putting all the pressure on, as Greg Bolger played a neat one-two with Will Fitzgerald just inside the box, but his first-time effort skewed wide of Derry ‘keeper Brian Maher’s right-hand post in the 66th minute.

Derry rallied, and had a chance to take the lead in the 70th minute when Paddy Kirk conceded a free kick on the edge of the Rovers box. Patching bent it around the wall, but it was too easy for McGinty.

Keena was on McGonigle’s coat-tails in the chase for the golden boot, and could have added to his tally after nicking the ball off Shane McEleney and stealing into the box, but he ballooned his shot well over the bar in the 73rd minute.

It was end to end stuff in the closing stages, as McGonigle lifted a shot over the advancing McGinty, but watched on as the shot trickled agonisingly wide.

Patching had another crack from a set piece in the 80th minute after Horgan was penalised for a handball, but drew an excellent save from McGinty once again.

As the clock rolled into injury time, it was Rovers who were finishing the stronger, as chances fell the way of substitutes Keogh and Nando Pijnaker, but neither were able to convert as Derry scrambled to defend.

But right at the death, Keogh smashed in the winner, jinking into the box and rifling a shot into the top left corner to steal all three points for Sligo Rovers, lifting them up to fifth place in the table.