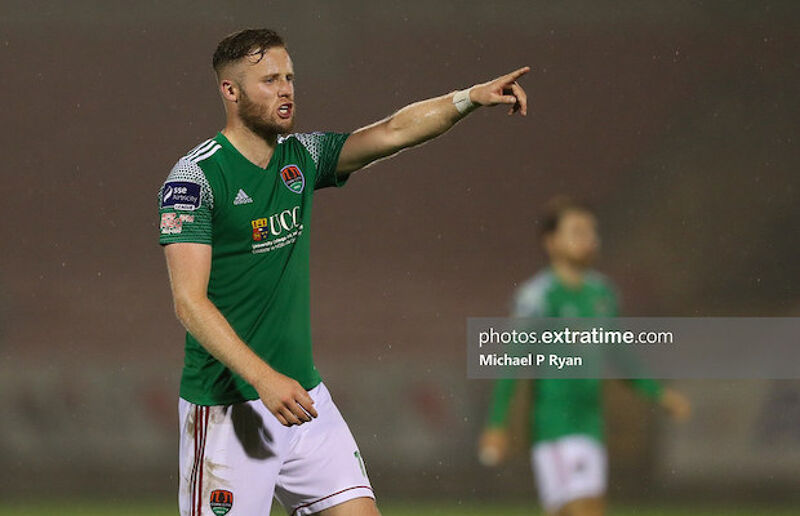 Kevin O'Connor was on the scoresheet for City Credit: Michael P Ryan (ETPhotos)

An equaliser from Conor Davis just three minutes into the second half cancelled out Kevin O’Connor’s sweetly hit opener meaning Cork City and Wexford shared the points at Turner’s Cross on Friday night and allow Galway United go two points clear of City at the top of the table.

All the numbers favoured Cork City ahead of this tie and in the early stages of the game they looked bright and confident, playing in a new 4-5-1 formation that pulled Cian Murphy back into a wide left position and left Ruairi Keating as the lone striker.

But Wexford have a side that is well regarded by those that watch them regularly and as the first 15 minutes elapsed they had had as much possession as their hosts, as well as causing the home defence as much worry as City had theirs.

The Leesiders then showed their fangs, Keating forcing Wexford captain Joe Manley to concede a corner from which Cian Coleman headed narrowly over the Wexford bar.

A better opportunity arose mid-way through the half when Keating was denied by Wexford keeper, Alex Moody, from close range. A goal was coming and before the clock had ticked into minute 23 City were ahead.

City left-back, Kevin O’Connor, got it, connecting sweetly with a ball from the right and volleying neatly across goal and inside the far post.

But Wexford didn’t wallow in their misfortune and three minutes later Conor Davis saw his shot blocked away by Jonas Hakkinen. A couple of minutes on they came closer still when a lovely piece of control by Jack Doherty enabled him to skip around Harrington and fire a shot on target, only for Cian Coleman to head the ball off the goal-line.

A minute after that City should have gone two up. Nice interplay between O’Conor and Murphy on the left produced a gentle but accurate cross that found Keating on his own eight yards from goal. He took a touch and fired on goal but Moody somehow reacted in time to get a hand to it, deflecting the ball away.

Thereafter the pace slackened and 15 minutes of uneventful thrust and parry brought the sides to half-time with City still ahead but with Wexford in honest pursuit.

And within three minutes of the restart Wexford were level. The endlessly combative Doherty won a corner on the right which Joe Manley rose to meet. His header wasn’t on target but it caused enough chaos in the home defence that Conor Davis could poke the rebounding ball high into the City net from ten yards out.

It was met with eerie silence around Turner’s Cross, the home crowd not quite able to take in what had happened, and minutes later Wexford demonstrated that, while pleased to have drawn level, they weren’t looking to leave it at that.

Another corner, this time from the left, and delivered by Doherty, was laid back to Conor Crowley who, with time and space available, fired wastefully high over the City bar.

The Leesiders, the First Division joint leaders going into the game, tried manfully to get their mojo back, while the Shed End gathered themselves and began to make some noise. But Wexford maintained their poise, their shape, and their optimism.

City were facing a team that weren’t easily going to stand back on account of mere expectation, and the rebels were rattled.

On the hour mark Aaron Dobbs fouled Bolger on the touchline, instigating a furious melee which favoured the visitors far more than it did the home side. Niggle and irritation were not what City needed. Frustration was building.

A free kick for the home side on the end line found the head of Coleman, but the ball drifted harmlessly wide. A corner from the right was overhit and ran out of play on the far side. All the while Wexford held the line.

With 20 minutes left Barry Coffey turned into space, right in front of the heaving Shed, and fired over the Wexford bar, the flag signalling that even had it gone in it wouldn’t have counted.

Wexford remained calm, continuing to poop the City party, and on 73 minutes Conor Davis might have put them ahead but Dave Harrington plucked the ball away from him at the vital moment.

City had a chance two minutes later, Barry Coffey shooting low and hard, but also wide. Had it been on target it would surely have gone in. But such speculations are of little use in the face of a disciplined opponent and an uncompromising scoreline.

With three minutes left Jack Doherty might have snatched it for Wexford, running across the City defence before forcing Harrington into a smart save.

The final minutes played out in a fever of City attacks that never quite breached the magnificent Wexford defence and when the final whistle blew the shared points were no more than Ian Ryan’s side deserved. Cork City, good as they can be on their day, just didn’t do enough.