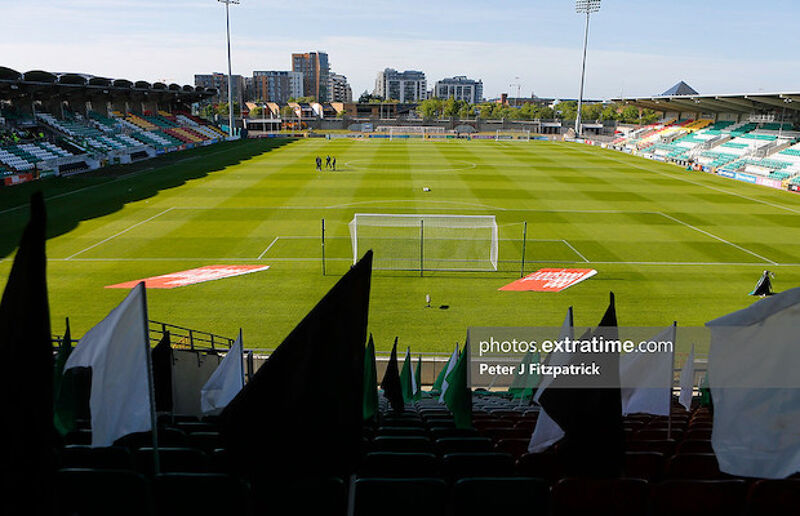 Construction has begun on a fourth stand in Tallaght Stadium at The Square Shopping Centre end of the ground Credit: Peter Fitzpatrick (ETPhotos)

Construction work has commenced in Tallaght Stadium on the 2,500 all-seater new North Stand.

The addition of a fourth stand in the home of Shamrock Rovers will bring the South Dublin County Council owned venue up to a 10,500 capacity.

The new stand will have 500 more seats than the existing South Stand. The increased size will facilitate offices and commercial units and the design includes covered stairs at either side of the stand behind wing walls which will improve access and provide shelter.

The contractor took possession of the construction site adjacent to the N81 road earlier this month and the stand is expected to be completed by late 2023.

The Hoops have averaged a crowd of 5,456 across their nine home league matches so far this season and have had three matches with over 7,000 spectators in attendance (7,478 v Bohs, 7,424 v St. Patrick’s Athletic and 7,125 against Derry City last Friday night).

Another sell out is expected in their next home match which is against Shelbourne on Friday week.

The venue has become the home in recent years for the Republic of Ireland's womens national team and the mens under-21 side.

The first signs of construction of the new North Stand @tallaghtstadium as elements of the site hoarding behind the goal have gone in. pic.twitter.com/C1ejeKD3CX