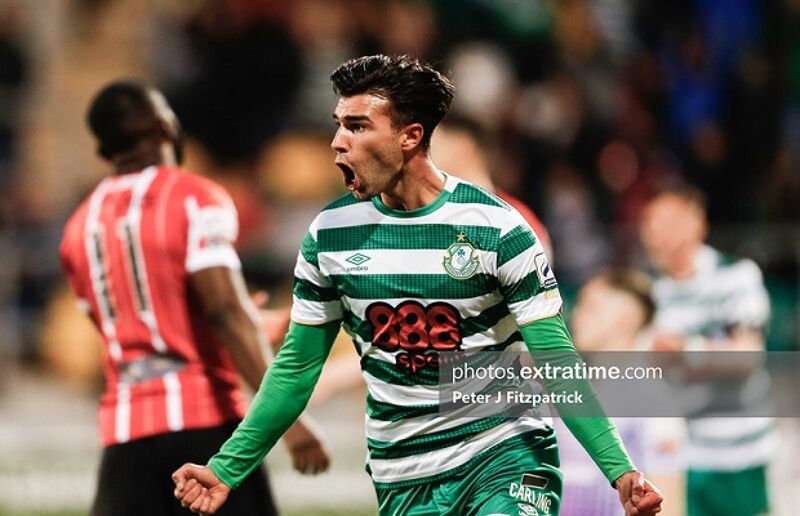 Daniel Mandroiu’s late second-half strike was the difference in a hard-fought top of the table clash at Tallaght Stadium, as Shamrock Rovers went four points clear of Derry City with a 1-0 win.

It was a beautiful evening in Tallaght for a tasty tie at the top of the table, as the Hoops overturned a six-point deficit in the past week against the Candystripes.

Graham Burke started alongside Rory Gaffney for the first time this season as Mandroiu was left on the bench after suffering a knock against Finn Harps last week.

A Ronan Finn break through into the box on 10 minutes was squared to Jack Byrne but a Derry man blocked the shot, but it was Derry though who were stringing more passes together.

Matty Smith and Joe Thomson proved to be a real handful behind the Rovers midfield as Jamie McGonigle dropped short to provide the overload.

Rovers passes were overhit or misplaced with Byrne individually looking like the only danger, at one stage though he was rather easily dispossessed by Cameron Dummigan which showed Derry's increased bite.

On 19 minutes Derry sprung a rapid counter attack ending up with McGonigle peeling off to the right hand side of the box. He played it across to Smith who could not get a good touch on it, with Alan Mannus’ goal at his mercy.

The best chance of the half fell to Derry during this time. McGonigle again peeled off behind Sean Hoare.

He was found by a beautiful curling cross from Brandon Kavanagh in the inside left McGonigle hit it well on the half volley but Mannus got his hands to it.

Rovers grew into the game as the half progressed with Burke able to get in between the lines and feed Andy Lyons down the left wing.

Rovers were more physical in the second half. Sean Gannon closed the space previously offered in the midfield, but it was Derry who showed their prowess again from a counter attack.

A barnstorming run from Joe Thomson played in Daniel Lafferty whose shot was saved by Mannus.

Luckily for the Hoops, Jack Byrne was getting on the ball more in advanced areas and played a succession of good passes into the box first to his midfield partner McCann was just cleared, as a through ball found Gaffney in the box, with his shot on goal well saved

A long ball by Maher then caught the Rovers defence cold as Patching made a run from deep as the hosts tried to step up. He played it across to Thomson who hit it well over from just outside the box.

Mandroiu’s introduction on 67 minutes for Gaffney changed the game. Where Rovers previously played long now they could play to feet and have it stick.

Burke combined with Mandroiu to create Rovers best chance in the 75th minute, as he shot at Maher’s near post from just inside the right hand side of the box. From the same position a few moments later he found Hoare who hit over.

The breakthrough came in the 78th minute as Lyons made his first dangerous run of the half. The former Bohs full-back pinned Derry back inside their box hitting a shot that could only be parried to the feet of Mandroiu to poke it home.

Derry did not give up but Rovers patience and quality was too much for them as the Hoops went four points clear and sent a statement that they do not plan on giving up their title any time soon.