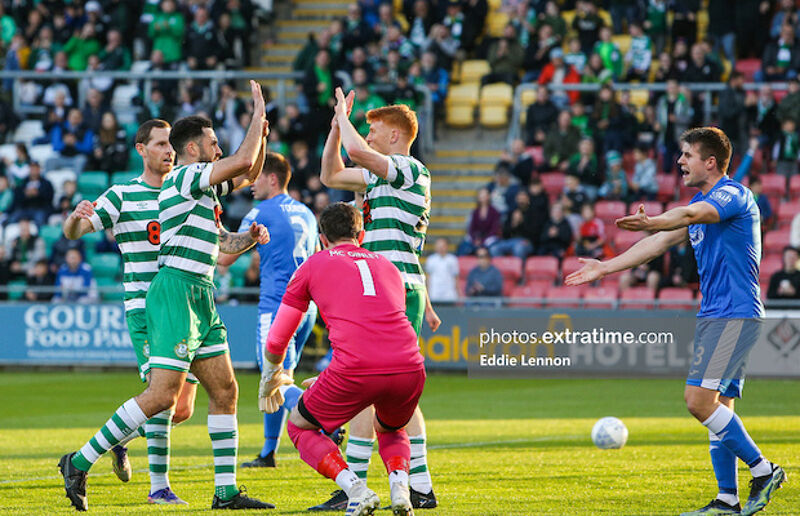 When you’ve played with seven different clubs during your 14 year football career, you have seen plenty of managers come and go.

Rory Gaffney recognises the importance of not becoming distracted by off-field issues and the 32-year-old kept focus on the Finn Harps game last Friday despite speculation about Stephen Bradley’s future at the Hoops.

The striker was delighted with the news that emerged on Friday morning that the Hoops Head Coach was not moving to League One side Lincoln City but was remaining at Rovers. Either way Gaffney was adamant that he wasn’t going to lose focus whatever Bradley’s decision.

“Obviously it’s great that he’s staying but we still have a job to do,” said Gaffney speaking after Shamrock Rovers’ 3-1 win over Finn Harps last Friday. “We’re still trying to win the league, we’re still trying to have a run at Europe, and a cup run, it doesn’t matter who the manager is.”

Gaffney said the speculation about who would lead the Hoops from the dugout didn’t bother him.

"Stephen Bradley’s done great here, and if he decides to move on, you wish him the best, and focus on Monday.”

The players were informed on Friday morning by Bradley that he was staying and reminded to not to take their eyes off the Finn Harps game that was to follow later that day. The Hoops were facing into a crucial ten days in Tallaght with home games following the Harps match against Sligo Rovers this evening and before league leaders Derry City come to Dublin 24 on Friday.

“He told us the news before it broke so we knew he was staying. He said he wasn’t leaving and to focus on tonight. He’s good like that. We weren’t focused on Sligo on Monday or Derry next Friday, we were focused on Finn Harps tonight and nothing else. I know it’s a boring cliche but it really is how we go about it.

Gaffney joined the Hoops from Salford City in 2020, having finished a loan spell with Walsall in the League Two. His first year in Tallaght was the truncated coronavirus hit season when injury and covid limited his appearances to just six matches (five of them off the bench).

Last season, he made 32 appearances across all competitions, scoring a dozen goals as Stephen Bradley’s side made it back-to-back league titles and made it to the Europa Conference League play-off.

On Monday Gaffney’s team play Sligo Rovers, the last side to defeat the Hoops in a league game in Tallaght (on 24th May 2021). They face the Bit O’ Red again having only played against them ten days ago.

This match has been moved forward to give League of Ireland clubs a free weekend between the first and second legs of their first game in Europe.

Against the Bit O’ Red earlier this month, the Hoops let a 1-0 lead slip in the second half with the game ending 1-1 and Gaffney was self-critical about his own performance in that match in the Showgrounds.

“We dropped points to Sligo last week but if I’d taken my chance we would have been 2-0 up and I could have played Danny Mandroiu in once or twice and we could have got the (second) goal. But we were always going to take 16 points out of six games (in April), so we’re on a great run.

“We’ve been getting better in recent weeks. We were slow to start (the season) and had a great month. If we’re unbeaten by the time the (mid-season) break comes around (27th May), I think we’ll be in a great position.”

The two games between the teams this year have ended in draws – 2-2 in Tallaght in April and a 1-1 draw late last month. So is it weird to face Sligo Rovers again so soon? “I suppose it is, but it’s good as the reason is we’ll get the rest in July during the European game,” said Gaffney.

“You’d rather be fresh in July and play Sligo on Monday. They’ve proven to be tricky for us anyway. So we’ll be raring to go. They lost to Shels (2-1 in Tolka Park on Friday), so they’ll have a nice journey to us again on Monday. So hopefully we’ll take care of business then.”