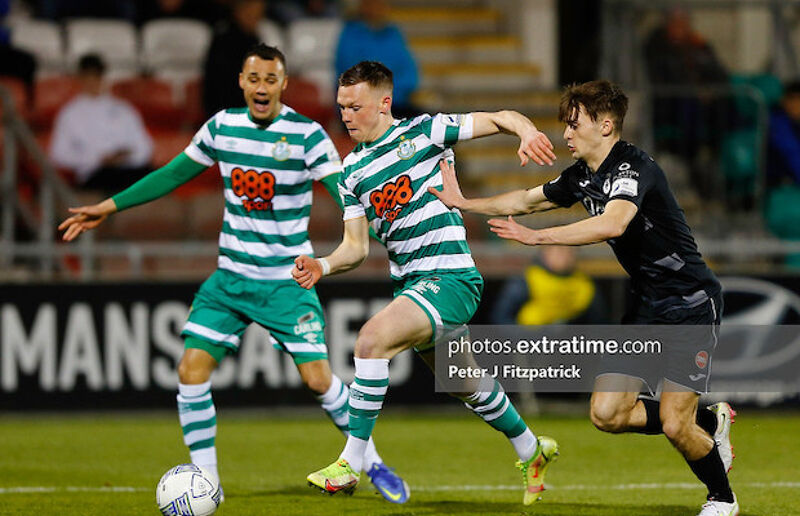 Andy Lyons on the ball during the 2-2 in the last game between the teams in Tallaght Credit: Peter Fitzpatrick (ETPhotos)

The Hoops come into Monday’s game just a point off the top of the table and have the chance to go top on Monday night with a win should league leaders Derry City fall to a defeat when they host third placed St. Patrick’s Athletic.

Stephen Bradley’s side come into this game unbeaten in ten matches with seven of those games ending with wins for the Hoops.

Last Friday night they held a 3-1 lead at half time at home to Finn Harps having scored three goals in an 11 minute period but couldn’t add to their tally in the second half.

There was a special atmosphere in Tallaght Stadium in that match as Hoops fans were delighted with the news from earlier in the day that the Hoops Head Coach Stephen Bradley turned down a move to League One side Lincoln City to remain in Tallaght.

“It was really appreciated,” said Bradley when speaking to his club’s media team about the great reception he received from the Rovers supporters “Massive thanks to the fans for that. There’s been a good atmosphere around the club and hopefully we can keep it that way. Long may it continue.”

Reflecting on the first half display which saw Pico Lopes score his first of the season and Danny Mandroiu scoring his fourth and fifth of the season Bradley reckoned it was a “very good” first half performance.

“We started the game really well and managed to get the three goals in the first half. That killed the game which was really good because some of our play deserved the goals. Thankfully we got them.

“I’m delighted for Pico. He’s been close on a number of occasions this year but he’s off the mark now. I thought Danny was brilliant all night. With his movement, he looks so dangerous. He got the two goals and maybe should have had a couple more. He was excellent.”

The Hoops allowed Conor Tourish to grab a goal for Harps just before the half time break. “We’re disappointed because we had a number of opportunities to clear it and we didn’t take it. It was a little bit sloppy on our behalf and to be fair to them, they punished us.

“We had a few opportunities in the second half and another night, you take one or two of them. To be fair to their keeper, he made some good saves and obviously we hit the post a couple of times as well. You would have liked to add to the scoreline but we can’t complain. We played well.”

Bradley handed Chris McCann his first start of the season and he was delighted with the midfielder’s contribution. “I thought Chris was brilliant. He controlled the whole tempo of the game. He quickened the game up when it needed to be and slowed it down when it needed to be.

"His positioning and decision-making were very good. It’s not easy to come in, after not playing, to produce a performance like that.”

Bradley is looking for nothing less than all three points when they welcome Sligo to Tallaght Stadium for the second time this season. “It’s going to be a difficult game. They’ve shown that because we’ve played them twice this year and haven’t managed to win either game.

"We’ve got to focus and do everything possible to get the three points.”

Rory Gaffney: ‘It’s great that Stephen Bradley is staying but we still have a job to do’ https://t.co/qT42yNrInC pic.twitter.com/zOlRc8hlX0

The last fixture between the sides was just ten days ago. Monday’s match has been moved forward to free up a weekend between the first and second leg of their European games in July.

Neither side have got the win when they have face each other this year. Sligo Rovers held a 2-0 win over the Hoops at half time in Tallaght when the teams met in March through goals from Will Fitzgerald and Aidan Keena.

However the Hoops rallied to earn a draw after Graham Burke’s penalty and Adam McDonnell’s own goal.

At the end of April, it was Shamrock Rovers’ turn to give up a lead after they led thanks to an Andy Lyons header mid-way through the first half. Jordan Hamilton’s equaliser came from a looping second half header.

Between this game and Monday, the Bit O’ Red lost 2-1 to Shelbourne in Tolka park with Paddy Kirk on the scoresheet for Liam Buckley’s men on the night.

Speaking to sligorovers.com Buckley said: “We have played Shamrock Rovers twice now so far this season and this game comes quickly after the last game just over a week ago so we are both well aware of each other and we know both sides have been fairly evenly matched so far in the previous games.

“Tallaght is always a difficult venue and the crowd will be right behind them so the lads will have to be at our best to take something from the game. We go there knowing we can match them and fingers crossed we can get a positive result.

“It’s always a good atmosphere when the two sides meet, and I have no doubt tomorrow will be no different’’.

The Hoops have only lost one league home game since June 2019. Sligo Rovers were the last Irish to beat Shamrock Rovers in league action in Tallaght Stadium (back on 24 May 2021).

Aidan Keena has scored five goals in total in the league, the same number of goals that Hoops players Andy Lyons and Graham Burke have.

This match is set to be Stephen Bradley’s 191st league game in charge of the Hoops. In that time he has won 113 games.