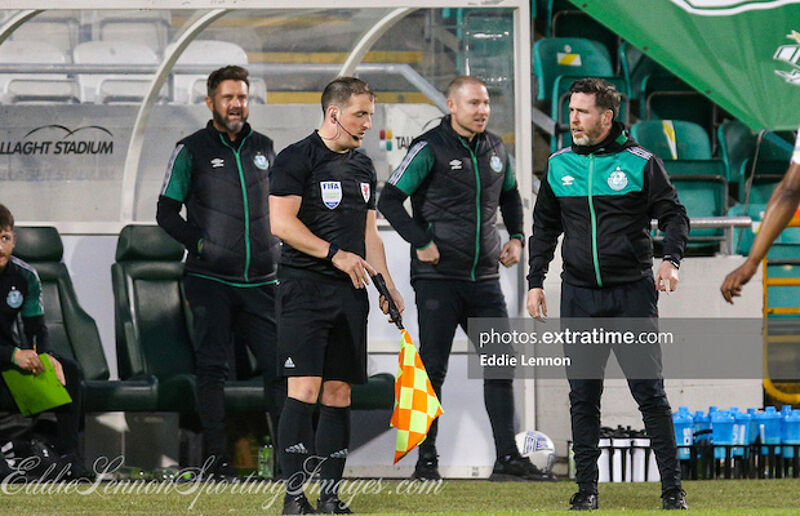 Stephen Bradley alongside Glenn Cronin and Stephen McPhail during the 3-1 win for the Hoops over Harps last night Credit: Eddie Lennon (ETPhotos)

It was a draining week for Stephen Bradley.

On a professional basis, he was grappling with a decision on whether to leave Shamrock Rovers for League One side Lincoln City. On a personal basis, he was dealing with the death of his maternal grandmother Emily Canning who he was very close to.

Having weighed up the various conversations he had with those involved in both clubs and those around him, Bradley informed the Hoops and the Imps on Friday morning that he would remain in his role at Shamrock Rovers.

His decision leant a slightly strange party atmosphere to Tallaght Stadium on Friday night. For the previous 24 hours, Rovers supporters had been resigned to losing the manager that had won the club’s 18th and 19th league titles along with ending their 32 year FAI Cup famine.

So there was a real sense of relief in the Tallaght with the news that he was to remain at the club.

After the stadium had emptied following his side’s dominant 3-1 win over Finn Harps and with the floodlights dimmed, Bradley spoke to a small group of media down on the pitch.

He reflected on a tumultuous week where he came close to leaving his local club and he outlined the reasons why he is continuing his tenure in the dugout in Tallaght.

“It was obviously hectic with what happened me nanny and then obviously Lincoln,” said Bradley. “It was emotional. There were talks going on with both clubs. It was just really, really busy, and draining.”

During the week Bradley held a number of zoom calls with Lincoln City and then met in Dublin with members of the League One club.

He was thankful of the space that Rovers gave for him to talk to the English club but all the while the Hoops leadership made it clear to him that they really wanted to retain his services in Tallaght.

Both clubs also gave him time to fully prepare for Friday’s game against Finn Harps, working meetings around the match day schedule and his family commitments.

“I obviously had a good chat with Lincoln with their owner (Clive Nates), their CEO (Liam Scully), head of performance (Ross Burbeary) and sporting director (Jez George). They are really good people, really good club and they have really good plans. They're set up for success.

“I spoke to the board here. I had a good conversation with (club captain) Ronan Finn, on behalf of the players. That was important as well.

“There were really good conversations with Ciaran (Medlar – Rovers’ chairperson), the board, with Dermot and Ray (Dermot Desmond and Ray Wilson own 25% each of Shamrock Rovers).

“It was good to see that the thinking was aligned and what we were all thinking was very, very similar on how we're going to get there and how we're doing. The structures are there, everything is in place.

“It was a really tough decision because Lincoln are a really progressive club in how they're doing things. On Thursday night I just sat down with the people around me, had a good chat, and I just felt this is where I need to be. I’m very comfortable with my decision.”

There will be some who will criticise the Hoops Head Coach’s decision not to make the move to the UK but that doesn’t bother the 37-year old coach.

"That's football but that doesn't come into my decision making, or it doesn't annoy me.”

extratime.com asked Bradley how much did his decision to stay with the Hoops revolved around another shot at Europe where Rovers, unlike last year, will be seeded?

“I'll be honest, our number one (target) is the league; we need to go and defend our title but Europe is obviously right there.

I felt we let one get away from us last year, we didn't perform over two legs (against Flora Tallinn), we got beat deservedly so (in the UEFA Europa Conference League play-off) and we want to try and get in that position again and go one better.

“(The decision to stay) wasn't all about Europe, Europe, Europe. It was about our progression as a club in all aspects. We just need to improve on what we did last year and we want to fight on all fronts - the league, the cup and Europe.

“Let's go as far as we can in all competitions. I feel we have a really strong group and are in a really good place right now and we can push on and improve what we did last year.”

Bradley noted that he was flattered by the approach from Lincoln and was clear that his ambition is to manager elsewhere , maybe even on the international stage.

“I think it is nice when people recognise that you are doing something right and that a forward thinking clublike Lincoln want to take you. It is a compliment.

“I have a real hunger and have ambitions to manage at different levels and in different countries. I have a timeline in my head but it's definitely something I want to do without a shadow of a doubt.

And do his ambitions include managing Ireland? “Yeah. Why not? I think it's the pinnacle of any manager's career. It's fantastic to see Stephen (Kenny) doing it now, coming from the league. If anyone was offered an Ireland job, you would run there.”