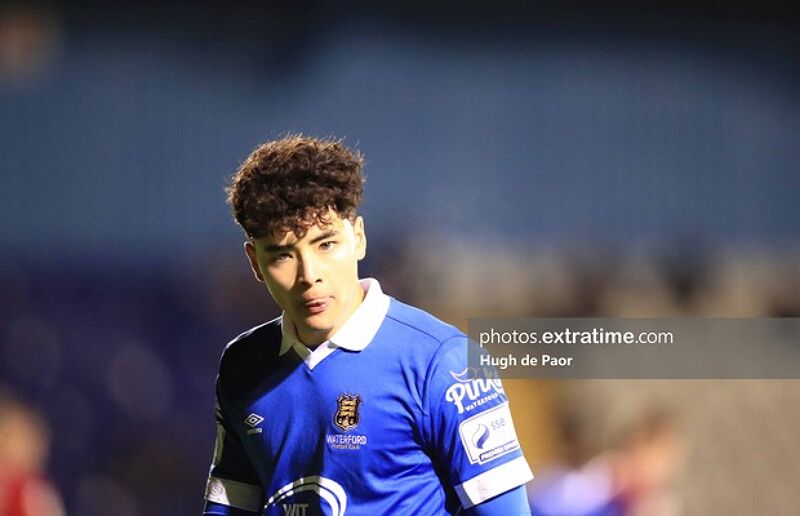 A late Louis Britton brace put the gloss on Waterford’s emphatic win on the road away to Bray Wanderers, winning 4-1 at the Carlisle Grounds.

Gary Hunt & David Breen’s re-invigorated side were also aided by a sensational display from Phoenix Patterson, with the former Spurs attacking starlet grabbing a superb goal.

Shane Griffin also got in on the act for the Blues, with Kevin Knight’s header to make it 2-1 ending up being a scant consolation for the Seagulls.

Waterford started the game brightly and took a deserved lead in the 23rd minute from Patterson.

The 21-year-old latched onto a cross-field ball from Kilian Cantwell, before arrowing a stunning strike into the top corner.

After taking the lead, the Blues turned the screw on their hosts, and were perhaps unfortunate to go in just one clear at the break.

They did, however, double their lead minutes into the second-half thanks to a fine individual effort from Griffin.

The 22-year-old slalomed his way through a host of Bray defenders, before slotting the ball home under the body of Bray keeper Stephen McGuinness.

While their threat was relatively limited, Bray hit back in the 87th minute, threatening a grandstand finish at the Quinsborough Road venue.

Eoin McPhillips’ wicked ball into the box found the head of Knight who made no mistake, halving the deficit.

While pushing for an unlikely equaliser, the Seagulls were undone on the break, with two quickfire goals coming from Britton.

His first came after he pounced on a defensive mishap from Knight, beating McGuinness with a fine finish across the face of goal from a tight angle.

And his second, and Waterford’s fourth saw him replicate his first, although not from the same mistake to add the gloss to another win on the road for the Blues.

Waterford have now won their last three games in a row, while Bray’s wait for a home win goes on, as their winless run stretched to nine games.