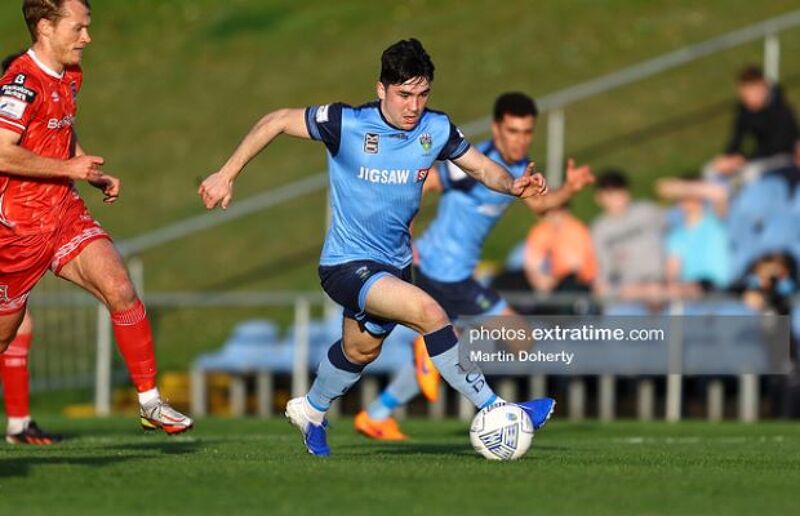 Colm Whelan’s second half brace secured a precious point for a determined UCD side on Friday night, as they held ten-men Dundalk to a draw.

UCD came into the clash bottom of the league, haven taken four points from their opening 13 games. Dundalk came into the game in third place after last week’s impressive Louth derby win over Drogheda United.

Seeking their first away win of the season, the Lilywhites almost went behind inside three minutes. Welsh under-21 international Nathan Shepperd misjudged the ball, and Whelan found himself with an open goal. Whelan chipped the ball over the goalkeeper, but Darragh Leahy got back in the nick of time to head the ball off the line.

It was the visitors who took the lead on 18 minutes. The ball fell to the feet of Paul Doyle after UCD cleared a corner. Doyle guided his shot through a crowded penalty area and into the net to put Dundalk ahead.

The Lilywhites remained in control for the remainder of the half, limiting the Students to very few opportunities. Jack Keaney went closest for the hosts in the first half, but his header went wide.

Keith Ward almost made it 2-0 after a fabulous run up the field. Ward glided past four UCD bodies, but his strong effort was well blocked by Evan Osam.

It was all going according to plan for Stephen O’Donnell until the 45th minute. Under no pressure whatsoever, Andy Boyle made a reckless tackle on Keaney and was handed a straight red card. O’Donnell was forced into a double change at the break as a result, with Keith Ward and Joe Adams making way for Sam Bone and Robbie Benson.

Boosted by the extra man, UCD went in search of an equaliser in the second half. They came inches from the leveller on 50 minutes substitute Adam Verdon flicked the ball the wrong side of the post. Sheppard fumbled the resulting corner before the ball went just wide again, in another let off for the visitors.

Despite the pressure, Dundalk went 2-0 up minutes later after Eric Yoro clipped Daniel Kelly inside the box. Pat Hoban stepped up and scored the resulting penalty, his sixth goal of the season.

Their 2-0 goal lead was short lived though, as a superb cross from the right by Mark Dignam found Whelan. With a quick glance at goal, the 21-year-old coolly curled the ball into the top corner to score his third of the season.

UCD’s fight and determination paid off on 75 minutes. Robbie Benson took Michael Gallagher down inside the box before Whelan netted the spot-kick to level the game.

Sam Bone went close to a winner for the visitors inside the final ten minutes, before a fantastic save by Kian Moore kept the scores level. UCD saw out the draw and remain bottom of the league, though they are now five points off ninth placed Finn Harps, who they face next week. A result against Ollie Horgan’s side in Ballybofey would give the Students a huge boost in their survival hopes. Dundalk drop one place to fourth and host Bohemians next Friday, where they will be seeking to remain unbeaten at Oriel Park this season.